There’s no timetable for finding the fit that’s best for you. Oftentimes we see college athletes commit or decommit from universities for various reasons revolving around coaching staffs, playing time, location, tradition and above all the best opportunity to win. 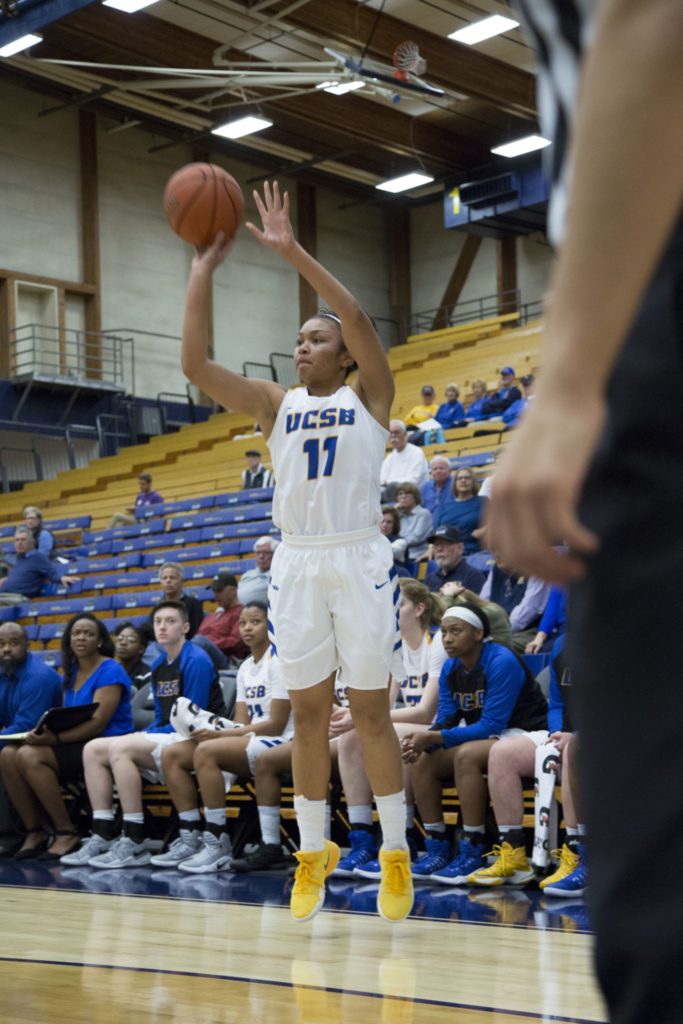 While most of the nation’s top athletes are praised for their four- or five-star rankings and outpouring of collegiate offers leading up to National Signing Day, choosing the next destination can be a long, arduous process that requires more time going through the junior college ranks or simply becoming better until an opportunity prevails.

For point guard Drea Toler and guard Sarah Porter, who are both members of the UCSB women’s basketball program, the right fit came as a result of transferring schools.

Despite being California natives, Toler from Inglewood and Porter from San Diego, the decision to pack things up and come to Santa Barbara was not a simple sign-and-release process.

As roommates and members of the Gauchos’ backcourt, Toler and Porter both sat out last season due to NCAA transfer rules.

According to ncaa.org, “Under the basic transfer regulations, you must spend an academic year in residence at the school to which you are transferring.”

Although both could participate in team practices and dress for play, the regulation prohibited the two from playing during the regular season and postseason, leaving them anxious and eager on the sidelines.

Toler expressed that it “was beneficial in being able to learn, but tough in being limited to only cheering for teammates and not being able to actually play.”

Expressing similar sentiments to her teammate, Porter assured that although it was a learning experience it was also “bittersweet because of the inability to play the game I love.”

Before making the transition to UCSB, the start to each of their careers was not a structured beginning when looking back at their recruiting experiences.

The recruiting process can be one full of clouded judgment as the constant phone calls, visits and promises can either enhance or deter one from making the most suitable decision.

The current state of the recruitment process has been shifted over the years as out-of-state universities now make more of an effort to recruit student athletes from all over the country. The response to the search has been kind as players are intrigued by the thought of a change in scenery.

Even so, this change hasn’t always warranted a promising outcome. It tends to only scratch the surface, showing what’s most appealing to the eye, sometimes leading student athletes to make questionable decisions.

Although Toler ended up staying on the West Coast for her first two years of college, the journey to becoming a duck wasn’t a pre-determined destination.

“Coming out of high school was hard. When I first came out, I actually committed to Sarah’s school, Ole Miss. It was the first school I went to and I just committed without knowing too much about it. I feel like that was more of a freshman thing to do.”

The period of uncertainty led to Toler’s eventual commitment to Oregon. A change in head coaches between her freshman and sophomore seasons, however, influenced her decision to leave the school.

Despite her undersized frame, Toler’s speed, ability to drive and court vision were each areas of her game which she believed UCSB catered to, making this the next best school for her.

“Once I came [to UCSB], it was different because I knew what to look for [regarding] the coaching, type of system and what the school offered academic-wise,” Toler said.

Meanwhile, a coveted high school career helped build up Porter’s reputation, who became well-known for her scoring ability, as she left Horizon Christian Academy as a member of its 1,000-point club with 1,292 points.

“I actually originally committed to Fresno State coming out of high school, but the coaches left, so I reopened my recruiting process,” Porter explained. “Ole Miss sounded amazing to me, [but] I kind of went blind into the situation because I didn’t know the coaches that well, which is why it ended up not working out.”

In the cases of Toler and Porter, it is plausible that the prestige of each of their former universities being within Power Five conferences set the stage for where they thought their future resided.

After beginning the season on the bench, Porter’s consistency as the Gauchos’ go-to shooter helped land her within the starting lineup as a stretch guard/forward.

“The third time around, I knew what I wanted to look for,” Porter said. “I wanted to come to a school where I felt comfortable with the coaching staff, the academics were good and they had everything they needed to offer me.”

Following the end of last season, in which only three seniors graduated, it was a wonder as to how exactly either player would fit into a team with four of its starters returning.

Understanding that there are no guarantees, especially pertaining to the court, Toler and Porter have certainly answered any concerns prior to entering this season.

In addition to helping UCSB capture the No. 4 seed and a first-round bye in the Big West Tournament, each player confirmed the anticipation that surrounded them following their redshirt seasons.

Toler ended the regular season tied for the conference lead in assists per game with a 4.4 average. Primarily coming off the bench, Toler finished atop the Big West in assists per 40 minutes at 8.3 as well. She also ranked second-best on the team in scoring in conference games at 10.9 points per game.

Meanwhile, Porter was another valuable piece as her three-point shooting led to her being one of the top perimeter shooters in the Big West. Her 38.1 three-point percentage during the regular season ranked seventh. Most notably, she placed third in the conference in total three-pointers made with 61, which currently ranks sixth most in a single-season in UCSB history.

It was unfortunate that the two were forced to sit out during the hype of the hiring of Head Coach Bonnie Henrickson. The process was a waiting game, but once that clock expired, the focus returned to helping revive the UCSB women’s basketball program in hopes of winning a conference championship.

Still, while returning to basketball was the ultimate goal, both expressed the importance of earning their degrees, improving during the offseason and simply continuing playing the game they’ve always dreamt about excelling in.

As a byproduct of their hard work, Toler and Porter knew they had the potential to thrive at the collegiate level, but it took the right fit in their choice of school to help make that a reality.

I’ve often wondered about the process by which players choose schools initially and then upon transfer. I appreciate your article on this topic.