The Daily Nexus
News
Construction Leads Expect Bike Lanes to Reopen in Spring
March 9, 2017 at 12:14 am by Tamari Dzotsenidze

Students can expect to bike by the library again when Spring Quarter rolls around. 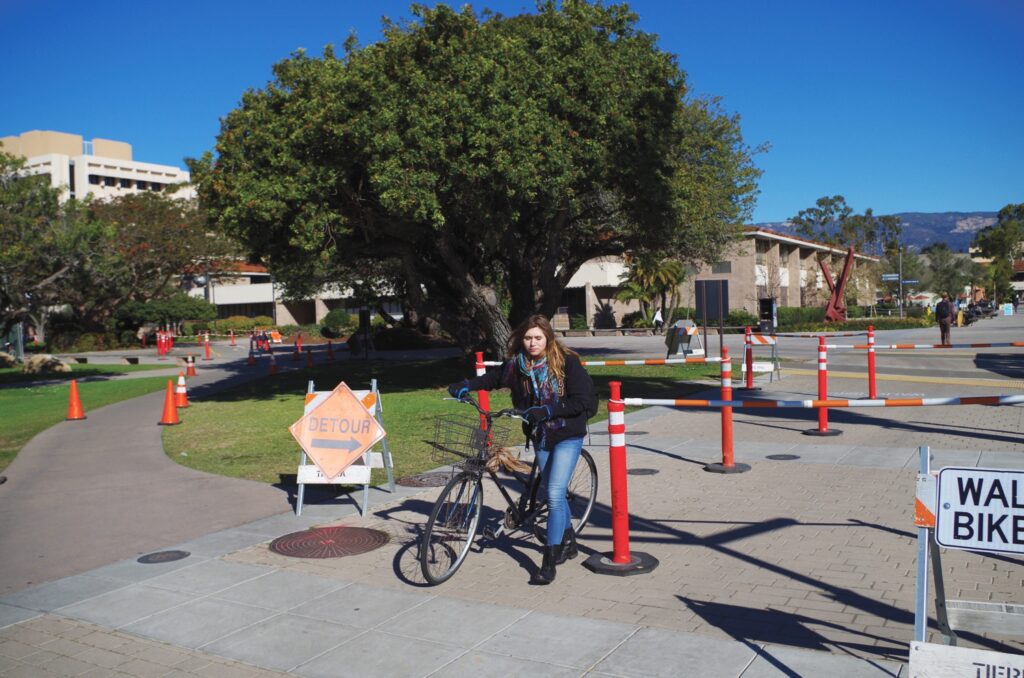 The bike path construction is replacing a main line sewer pipe. The workers laid the last segment of pipe on Tuesday evening and are now replacing the ground on top.

The project faced significant delays due to the large storms as well as sporadic rain events throughout the winter that have led to extremely wet soil that is taking longer than expected to dry.

The renovation may be further extended to replace a part of the bike path. Though this is not part of the infrastructure project, Foster believes it would be ideal to take advantage of cyclists already being rerouted.

“We’ve done Herculean efforts to keep construction as minimal with regards to the extent of the work,” Foster said. “That slows us down a little bit, but I think that payoff is important to the students.”

In order to minimize the project’s impact on students, project managers have extended construction hours as late as 10 p.m. in attempts to finish construction sooner.

Ray Aronson, associate director of Design & Construction Services, said financing for the infrastructure project comes from the state’s annual budget. Phase 1B, which was done by Tierra Contracting, totalled $6.5 million, while the contract with D-KAL Engineering for phase 1C was $2.3 million.

According to Michael McGrogan, financial planning analyst, UCSB will not be responsible for payments on the loan, which came from the UC Office of The President. The office will repay the loan through state appropriations.

Also included in phase 1C is the Lagoon Road stormwater drainage project, which will create a new pipeline to reroute runoff water into the lagoon instead of off the eastern bluffs.

The project will abandon and cap the existing drainage pipes and remove the sections that extend past the bluffs. This may help prevent bluff erosion, which could potentially affect the new pipeline in 100 years.

The new pipeline is installed between 30 and 200 feet away from the bluffs’ edge.
A lagoon hydrology study was prepared in 2008 to analyze the hydrological impact of this project. The study found that this would only moderately increase the lagoon’s water levels and showed there would not be a significant increase in pollutants, since the lagoon already contains high levels of copper, phosphorus and nitrogen.

The report recommended a bioswale to improve water quality, prompting the San Nicolas Restoration project as part of phase 1A. A bioswale is a landscape technique designed to remove silt and pollution from surface runoff water.

This may improve water quality in the lagoon by diluting current water with water that does not have the pollution present in previous storm runoff.