On Saturday, the UCSB men’s and women’s track and field teams headed south to UC San Diego, who is hosting the annual meet between the Tritons, Gauchos and Big-West rival UC Irvine.

Santa Barbara was able to grab victories on both sides at the All-UC Meet, repeating the victory at the Gaucho Roundup last weekend to kickstart the outdoor season with two comprehensive showings across the board. 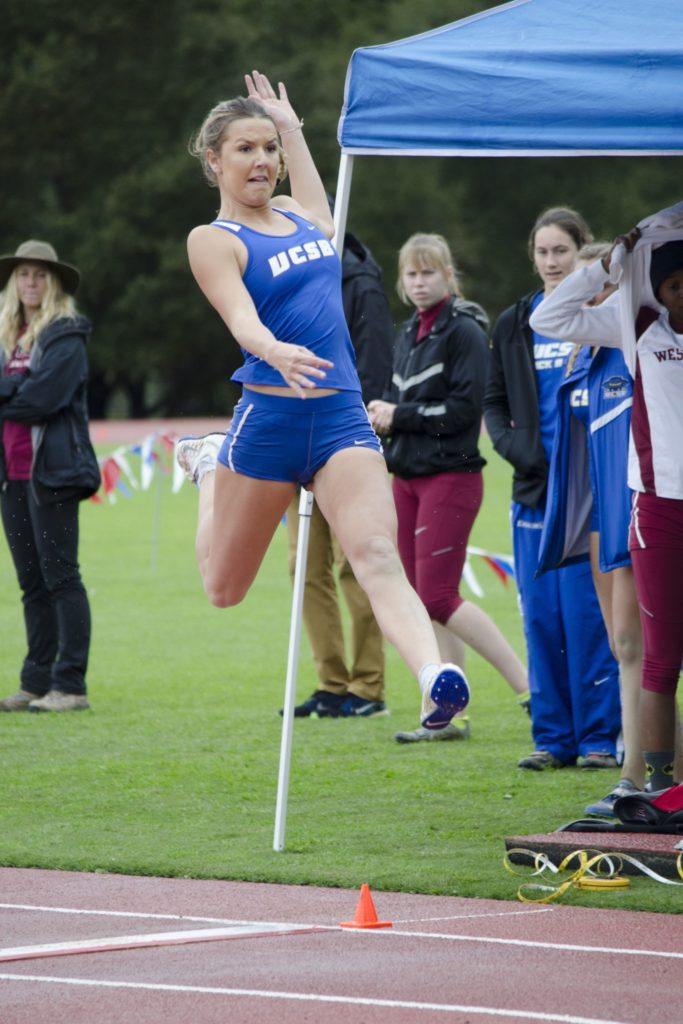 In the men’s events, UCSB put on a nearly identically impressive display, with 177 points, ahead of the Tritons and Anteaters, who tallied 133.5 and 72 points, respectively.

UCSB had two school records broken on Saturday, in addition to leaving with three meet records, one of the best showings the team has had in recent years.

Junior Sike Azu-Irondi broke Sandy Combs’s 20-year-old men’s 100m record (10.56) by a hundredth of a second to claim his place as the fastest man in Gaucho history — in his first race back from injury after missing the majority of last year. Azu-Irondi also picked up the meet record for his efforts.

Sophomore Kordell Hampton followed suit in the men’s discus, and broke Mike Wimmer’s 33-year-old record by an inch, launching his first toss of the event 178 feet, over eight feet farther than his previous personal best.

Wilmer’s mark was the joint-fourth-oldest record in program history. Just two weeks into the outdoor season, UCSB’s team is shaping up to become a force once Big West meets come around.

“It’s really exciting. The first meet was a smaller practice meet, but this was our first chance to set precedent for rest of season. The team records that got broken were both over 30 years old which was amazing for the guys and everyone is just really happy for them,” junior distance runner Jenna Hinkle said.

Hinkle won the women’s 1500m in 4:28.20, just three seconds off her personal best in her first runout in the event this year, a good sign so early in the season.

The junior also finished first in the women’s 3000m in a personal record of 9:46.71, moving her to ninth in UCSB’s record books. She has now finished first in her last four races, including the mile and 3000m at the Gaucho Round-Up a week ago.

“It was obviously a great opener for me, but it was my first 1500m of the year so it was a good gauge of what kind of shape I’m in at this point in the season,” Hinkle said.

Following the trend of record-breaking season debuts, Adam Avila’s outdoor season start couldn’t have gone better, breaking a 15-year-old meet record in the men’s 3000m steeplechase in 9:00.20, which cracks him into the top-10 in the program’s all-time list to cap off the Gauchos’ historic performance.

In the women’s sprints, the Gauchos dominated the field, with Morgan Simpson grabbing wins in the 200m and 400m with times of 25.80 and 56.91, respectively.

Senior Shannon Trumbull grabbed a double of her own in the 100m hurdles and 400m hurdles 13.95 and 1:01.43, respectively, with a noticeable gap between her and the second-place runner in each event.

Sophomore Jazmin Moss did her usual thing in the women’s jumps, earning two first place finishes with marks of 17′ 11.75” in the long jump and 38′ 0.25” in the triple. On the men’s side of the jumps, junior Jeff Lam managed a more unorthodox double. Lam is victorious in the long jump at 23’2.5” and high jump at  6’4.75’; he is tied with sophomore teammate Joshua Rennick atop the podium.

On the men’s side of the jumps, junior Jeff Lam managed a more unorthodox double. Lam is victorious in the long jump at 23’2.5” and high jump at  6’4.75’; he is tied with sophomore teammate Joshua Rennick atop the podium.

Next up for the Gauchos is the Ben Brown Invitational at CSU Fullerton Friday night and all through Saturday, Mar. 11. They’ll look to continue their great early season form as the team tours through California invitationals over the next two months.