The Daily Nexus
Sports
UCSB Clinches No. 4 Seed in Big West Tourney With Blue-Green Victory
March 6, 2017 at 5:10 am by Sean White

For the first time since the 2012-13 season, and in just the second year with Head Coach Bonnie Henrickson, the UCSB women’s basketball team has clinched the No. 4 seed and a first-round bye heading into the Big West Tournament after its 77-63 defeat of Cal Poly Saturday night.

“I think this is [most important for the senior group]. I always say oftentimes that you’re going to go as far as your seniors can take you from a leadership [and] energy standpoint,” Henrickson said. “If you look at from the beginning of the year, the growth we’ve had, it’s been been fun to watch them mature.” 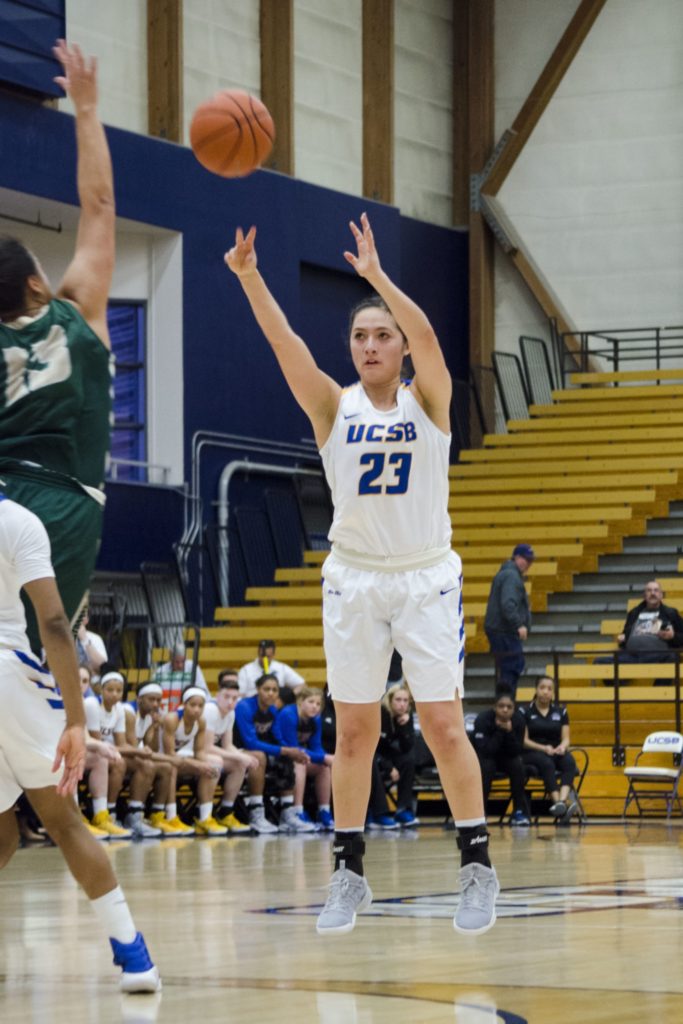 UCSB’s victory allowed it to avoid being swept in its season series versus the Mustangs. The Gauchos ended the regular season with two more victories in both its overall and conference record at 14-15 and 9-7. The Mustangs concluded with losses in three of their last four games to end at 11-17, 7-9 and will enter the postseason as the No. 7 seed.

In her final career game in the Thunderdome, senior point guard Onome Jemerigbe finished with a team-high 16 points on 3-of-6 and 2-of-3 three-point shooting, while going 8-of-8 from the free-throw line.

“I just wanted everybody to have fun and [ensure] the energy would be there,” Jemerigbe said. “Whenever the team needed scoring, I just took the opportunity. It’s all or nothing now, the momentum we have from this game will hopefully roll over to the next.”

In one of the game’s most critical moments, it was Jemerigbe’s made three-pointer with nearly six minutes left in the game that prevented a surging Cal Poly team from possibly completing a comeback.

Along with Jemerigbe, both senior forward Mi’Chael Wright and senior center Melissa Maragnes were celebrated for Senior Night.

Shifting the game in Santa Barbara’s advantage were runs to close the first half and open the second before Cal Poly embarked on its fourth quarter comeback, cutting the Gauchos lead to six before coming up short.

It was a highly energized atmosphere inside the Thunderdome with conference tournament seeding at stake. Nonetheless, both teams traded baskets in reflection of the game’s intense pace.

Cal Poly jumped out to a quick 4-0 lead which included a basket by junior guard Lynn Leaupepe, who scored a game-high 24 points but could never establish any consistency as she shot 9-of-22 and 4-of-10 from long range.

The Gauchos struck with a balanced attack, first going to redshirt junior forward Drew Edelman in the paint, then from behind the three-point line with redshirt sophomore guard Sarah Porter for a 5-4 lead. It was a start that led to a 15-3 run that before Lynn Leaupepe scored five-straight points to end the quarter as Cal Poly trailed 15-12.

Porter continued to warm up from deep with two three-pointers in the first to minutes of the second quarter. The Gauchos’ shooter scored eight of the team’s first 10 points.

It was Porter’s most productive period as she tallied 10 of her 13 points during the period, and ended the game 4-of-7 from the field and 3-of-5 from beyond the arc.

Yet, tying the game at 25 apiece with a three-pointer was junior guard/forward Mary Kate Evans for her only field goal off the bench.

The tie wouldn’t last long once UCSB put together its 12-3 run before halftime. Half of the Gauchos points were scored at the free-throw line. Also responsible for half of the points lodged was Jemerigbe as her two made free-throws handed UCSB a 37-28 lead at halftime.

With momentum already going UCSB’s way, the opening minutes of the third quarter belonged solely to the Gauchos as they constructed a 16-6 run.

The scoring stretch began with the draining of a three-pointer by Jemerigbe to give UCSB its first double-figure lead of the game at 40-30.

Helping Cal Poly chip at the Gauchos’ lead was senior forward Hannah Gilbert as she scored seven points and went a perfect 3-of-3 from the field in the quarter. Overall, Gilbert shot 50 percent (5-of-10) and ended the game with 12 points, four rebounds, one block, and one steal.

But Santa Barbara’s scoring outburst proved to be too much as its bench emerged as well. The combination of redshirt junior point guard Drea Toler’s drive and kick ability along with freshman guard Aliceah Hernandez’ perimeter shooting helped run up the score on UCSB’s end.

The two scored six apiece, and it was Hernandez’ made three-pointer at the 4:17 mark of the third that gave UCSB a 53-34 lead as it seemed destined to route its Blue-Green rival.

Toler finished with 15 points and a game-high seven assists, while Hernandez ended with six points.

Despite its 19-point deficit, Cal Poly still showed signs trying to curtail UCSB’s growing lead. Junior guard Dynn Leaupepe complemented her sister’s scoring with seven-straight points during the third quarter but it would not be enough still. Her final results to the game were 16 points and five rebounds while going 7-of-16, 2-of-4 from long distance.

UCSB’s ability to hold the sisters to inefficient shooting nights was key in its defense holding Cal Poly to percentages of 38.5 from the field and 35 from behind the perimeter.

“We held them to 40, they had 55 last time. Good heavens they’re good. There’s not much you can do with a midrange game,” Henrickson explained. “We tried to keep them on one side of the floor. [On Friday] we played some things live, which we don’t normally a lot. Every assistant had a stat. What are their numbers, percentages, zone numbers? At the end of the day, the players have got to buy in. We [had] to play the percentages and we did.”

Yet, a quick 8-1 run helped the Mustangs trim UCSB’s lead to 62-49 heading into the fourth. It set the stage for their dominant start to the game’s final 10 minutes as they then went on a 9-2 run, bringing its deficit to 64-58 with 6:08 remaining following steal and made layup by Lynn Leaupepe.

With UCSB’s lead being jeaopardized, Jemerigbe prevailed with a three-pointer to give UCSB some comfort. Regaining the Gauchos’ double-figure lead of 69-58 was a made layup by Toler.

From that point on, UCSB scored one last field goal and scored the remainder of its points at the free-throw line where it finished 19-of-26.

Ending the season at home and with a two-game winning streak is momentous for a Gaucho team preparing for March Madness beginning with the Big West Tournament.

UCSB’s next game will be Wednesday against the remaining highest seed at 8:30 p.m.