The Daily Nexus
Sports
Gauchos Go Undefeated in Utah, Return Home for Gaucho Classic
March 6, 2017 at 5:02 am by Calvin Thrift

It was a successful weekend for UCSB softball as the Gauchos won all five of their games at the St. George Red Desert Classic in Cedar City, Utah. Heading into the weekend, the Gauchos prepared for play against first-time opponents Utah Valley, Iowa State, Nevada and Southern Utah, as well as a Nebraska-Omaha team they’ve already beaten.

At their most recent game, UCSB softball defeated Nebraska-Omaha in extra innings by a score of 2-1 on Sunday morning. Sophomore pitcher Veronika Gulvin got the win for the Gauchos, thanks to a game-winning run in the eighth inning by freshman infielder Alyssa Diaz bringing in senior outfielder Kristen Clark. 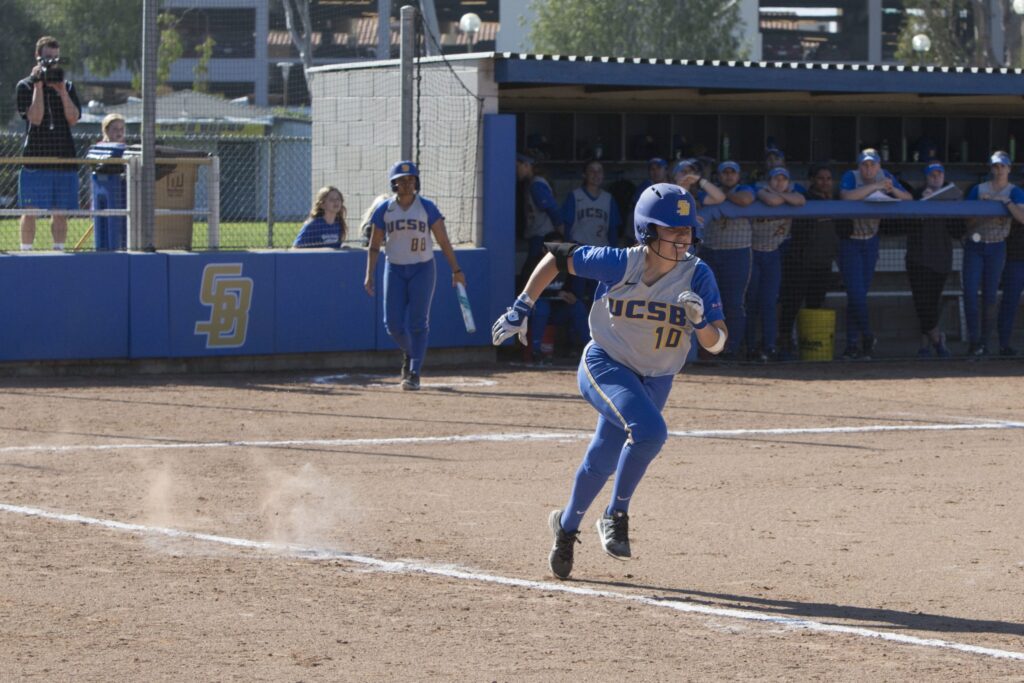 The game was scoreless until the top of the third, when senior outfielder Jacqueline Hinojosa singled into left field to get the Gauchos on the board with a run. It was then tied up following a run the Mavericks’ freshman utility Emma Dargy, thanks to a double from freshman infielder Hailey Bartz.

The low-scoring game continued in a defensive battle, forcing extra innings. With the Mavericks only recording four hits throughout the game, UCSB capitalized by getting the run it needed to win in the eighth.

Following Sunday’s game, the Gauchos are now 3-0 when playing in extra innings.

On Saturday, the Gauchos got out to a sluggish start against Southern Utah, giving up three early runs in the top of the first inning. For Southern Utah, senior first baseman Karlee Manzione homered and brought three runs in, allowing her teammates senior infielder/outfielder Payton Hart and junior outfielder Sarah Murphy to score.

UCSB wasn’t fazed, however, as they answered back in the bottom of the first, starting with sophomore second baseman Sierra Altmeyer’s homer, which brought junior outfielder Jessica Johnston in to score as well.

Both teams were off to fast starts, and the game sat at 3-2 Thunderbirds following the first inning. The Gauchos went on in the bottom of the second to tie the game 3-3 with the help of a single by Hinojosa, bringing freshman infielder Kayla Krantz in to score a run.

After some scoreless innings for both teams, the Gauchos secured a one-run lead in the fifth. At this point the Gauchos held all the momentum, keeping the Thunderbirds at bay thanks to junior pitcher Lena Mayer, who got her first win of the season.

With a shot from Johnston, Hinojosa was brought in, securing the Gauchos’ 5-3 victory over the Thunderbirds. Johnston went 4-4 at the plate during this, including bringing in Clark for a run with a single up the middle.

Earlier on Saturday, the Gauchos faced off against a Nevada team that would be shut out in five innings by Gulvin, who earned 10 strikeouts. After two innings, the teams were tied at 0-0, but in the third a wild pitch from Nevada saw UCSB senior third baseman Emily Brucelas score. Brucelas went on to bring in Altmeyer for a 2-0 lead. Soon after, freshman infielder Whitney Pemberton brought in Hinojosa with a single.

In the bottom of fifth, Nevada still scoreless at this point, the Gauchos increased their lead to 5-0 with contributions from Diaz and Altmeyer off of a sacrifice fly from junior infielder Samantha Lujan and a single from Brucelas, who went a perfect 3-3 at bat.

Nevada finally scored with an effort from junior outfielder Aaliyah Gibson, allowing senior outfielder Raquel Martinez to score the sole run for the Wolf Pack. Beating Nevada 5-1, the Gauchos built off of momentum from their two wins Friday.

On Friday, UCSB looked to keep things rolling against Iowa State following the morning win against Utah Valley. The Gauchos got on the board early with the help of Pemberton’s solo homer in the top of the second inning. In the bottom of the third, the Cyclones tied up the game with a run from senior outfielder Cathlin Bingham.

The next three innings saw the advancement of a 4-1 Gaucho lead, beginning with a run from Pemberton in the fourth. In the fifth, Pemberton’s fourth double of the day saw Johnston score to establish a 3-1 lead. The Gauchos continued with another run in the sixth, thanks to a sac fly by Clark’s, which brought freshman infielder Genesis Ramirez home to make the game 4-1.

With two outs in the bottom of the seventh, the game appeared to be coming to a close. However, the Cyclones rallied with the help of a single from sophomore catcher Kaylee Bosworth and a homer from freshman infielder Talyn Lewis. With the game now a close 4-3, freshman pitcher Felisha Noriega came up big for the Gauchos with a final strikeout for her first win of the season.

Earlier on Friday, the Gauchos competed against a talented Utah Valley team, squeezing a 9-7 win over the Wolverines.

Following the second inning, the Wolverines were up 4-0 after a four-run inning. Pemberton finally got the Gauchos on the board with a double in the fourth to bring Altmeyer home. Following two runs from Clark and freshman catcher Nyssa Williams, at a second at bat in the fourth Pemberton doubled to bring in Altmeyer and Johnston for a 5-4 lead.

The Wolverines used some momentum to rally and score three runs in the bottom of the sixth, making the game 7-5. Down two runs in the seventh, UCSB needed to come up big to secure a win, and they did just that. Pemberton made her presence felt again, hitting a double to bring Johnston home to make the score 7-6.

Following a Krantz strikeout and with two outs on the board, UCSB rallied to make the game 9-7 with hits from Lujan and Hinojosa, allowing Altmeyer, Brucelas and Pemberton to score at home.

The Gauchos not only came up big on offense in the seventh, but they also shut out Utah Valley in the final inning to win the high-scoring game 9-7.

The Gauchos are now 9-10 thanks to their 5-0 sweep in Utah. They will look to continue that energy as they play host to teams in the Gaucho Classic, which will tip off Saturday, March 11 at 1:30 p.m. at Campus Diamond. The Gauchos will play Sacred Heart to open their weekend and will also face George Washington, San Diego and Northern Colorado twice over the course of the Classic.