The Daily Nexus
Sports
Gauchos Disappointing Campaign Ends With Highlight Win at Cal Poly, Send Childress Off With One Final Victory
March 6, 2017 at 5:09 am by Quinn Moslander

Santa Barbara’s season ends at 6-22 overall and 4-12 in conference play. The victory at Cal Poly was and will be, the Gauchos only road win of the season. Cal Poly falls to 11-19 overall and 6-10 Big West and will hold the No. 7 seed going into the conference tournament next week.

Cal Poly falls to 11-19 overall and 6-10 Big West and will hold the No. 7 seed going into the conference tournament next week. 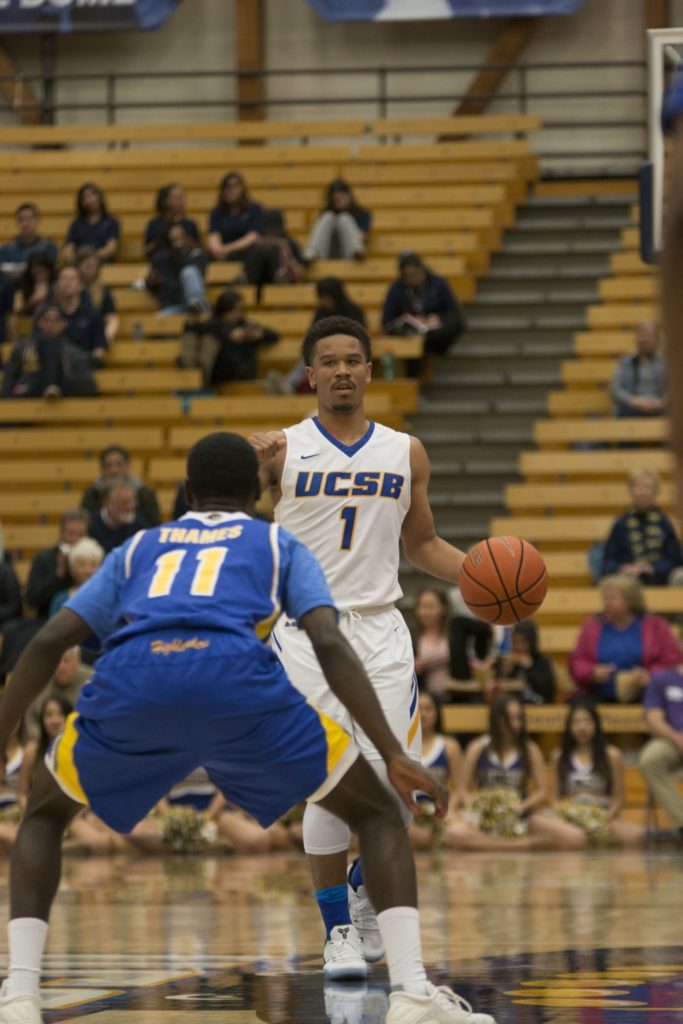 Eric Childress sets up a play with his team. Stephen Manga / Daily Nexus

Originally, the Gauchos were expected to secure the eighth and final seed despite being in ninth place due to Hawaii’s post-season ban imposed by the NCAA last season.

However, last Friday, the NCAA reassessed the penalties it levied against the Rainbow Warriors and reduced the punishment allowing them to participate in post-season play this season.

UCSB’s 4-12 conference finish was one game behind No. 8 seed UC Riverside and two games behind the No. 7 Mustangs who the Gauchos swept this season.

The first half was dominated on the Gaucho side of the court by senior guard Eric Childress and freshman guard Clifton Powell Jr. Powell, who has recently made great improvements in his ability to get precise shots off. Powell brought in eight points in the first half as well as six rebounds.

Shooting started off with a jump shot from Powell and a quick three-pointer in response from Fields. Both teams traded baskets consistently until the 12th minute when only four points were scored, one from Mustang junior guard Victor Joseph and the other from Gaucho junior forward J.D. Slajchert, until 7:40.

The score was kept relatively close until the sixth minute when UCSB made a small charge to take the lead 23-18, thanks to a surge of energy from freshman guard Max Heidegger along with Powell. After a three-pointer from Shipley at 3:54, no further points were scored in the first period, putting the score at 27-23 Gauchos at the half.

At no point did the Mustangs ever catch up to the Gauchos; the closest they came to closing the lead was right at the beginning of the second period with a jump shot one minute in from junior forward Luke Meikle, bringing the score to 27-25.

The Gauchos managed to score 30 in the second half, 12 of which came exclusively from Childress. Overall, Childress led the board with 19 points, the next closest scorers only bringing in 10 each. He had a great game with three steals and two assists.

Junior forward Alex Hart only put four on the board tonight, a few less than he has been lately, but managed to snatch up 12 rebounds.

The Gauchos managed to run away with the score, starting with a jump shot from freshman guard Christian Terrell. From 16:49 to 11:47, UCSB brought in 14 points while Cal Poly had seven missed shots.

The last five minutes of the game were characterized by a three-pointer and jump shot by Heidegger and four foul shots from Childress as well as a three-pointer from Victor.

There were 16 points from the Gaucho bench, 10 of which belonged to Heidegger, who continues to improve and play with fire and speed. In the last few games, the younger members of the team have truly grown, hopefully leading to a successful 2017-2018 season for the Gauchos.

In the end, UCSB will only be losing one senior in Childress, but the guard will be a tough replacement to find, not just on the court, but off it.

Childress ends his career with the third-most assist in UCSB history (407), and the second-most steals (153).

The senior has been a consistent force for the Gauchos over the past four years, and he will always be known as one of the better players to represent the UCSB basketball program.