The Daily Nexus
Fine Arts
‘Lydia’ and the Connection to an American Dream
March 3, 2017 at 11:19 am by Allison Garfield

Set in El Paso, Texas during the Vietnam War, Octavio Solis’s “Lydia” explores the idea of the “American dream,” exposes the relationships between a family and their new maid who uncovers their secrets and tells the story of life in a country that cannot always live up to its promises of liberty and justice for all.

The show ran from Feb. 17 to Feb. 26 in the Performing Arts Theater, a small, round, intimate theater that emphasized the claustrophobic atmosphere of the struggling Flores family. The director of the show, Irwin Appel, composed the original music for the play. He is also the director of the BFA Acting Program at UCSB.

In the director’s note in the program, Appel states, “Although written nearly a decade ago, Lydia raises a plethora of issues completely relevant to our world at this particular moment: immigration, sexuality, disabilities, race and ethnicity, and particularly forbidden love.”

The poetic and highly imaginative show indeed addressed all of these issues in such a raw and real way that it almost made the audience uncomfortable. The play takes place in the Flores living room from the perspective of 17-year-old Ceci, who was in an ambiguous car accident when she was 15, which resulted in her vegetative state. She cannot speak, walk, take care of herself or even move correctly. Tension revolves around the disabled young girl because no one in the family will discuss the crash or knows what happened the night of it. That is, of course, until Lydia arrives at their home. Reality is constantly interrupted with Ceci’s dream-like monologues where she is no longer disabled. Her character is practically two different people. In her fantasies, she can walk, talk and comment on what is happening around her, especially because no one realizes that she notices everything.

The seven UCSB students who performed in the show acted with great emotion and passion; there is no doubt that they fully immersed themselves in their characters, which was probably much more challenging to do in an edgy show like “Lydia” opposed to other plays due to the sensitive issues being addressed. With nudity, sex, incest and gay scenes, the actors made what might seem awkward look comfortable and natural.

Before I go into an in-depth review of the play, it is important to understand who each character is and their relationships with one another. Ceci (17), Misha (16) and Rene (19) Flores, played by Jazmine Bang, Oliver Rubey and Elias Reyes, are the children of Rosa and Claudio Flores, portrayed by Rosslyn Cornejo and Byron Torres. They hire a smiling, pleasant maid, Verenice Zuniga’s Lydia, to watch after Ceci who is in love with Alvaro. Alvaro, played by Bruce Terrance, is Ceci, Misha and Rene’s cousin and works as an immigration patrol officer on the border between Mexico and the U.S. However, it is revealed that Alvaro and Rene are together intimately. Misha, who is sweet and innocent, is in love with Lydia who sleeps with Claudio, but eventually she grows feelings for Misha. As you can tell, it’s confusing and complicated and a bit of a hot mess. The actors do a fantastic job of slowly unraveling each relationship and its individual dynamics. 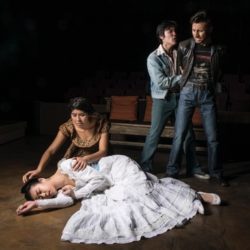 Courtesy of UCSB Theater and Dance

The first act had an enjoyable arc and build in tension. The audience is introduced to all the characters and the initial conflicts in the play are presented: How did Ceci become the way she is? Who is responsible for the car crash? Why won’t Claudio speak English or interact with anyone in his family? What is Lydia hiding? These questions are answered in the second act; secrets are revealed and things get a little crazy. Act one ends with Rene walking in on Lydia and Claudio having sex (very realistically), but they don’t see him, so just imagine what will ensue in act two!

Jasmine Lee, a second-year communications major, sat next to me during the Feb. 22 show. She commented, “There were so many things happening, and you kind of have to be very strategic about how you play the intensity of it and how to work your way to that point. There were moments where it kind of got too chaotic and wasn’t balanced with enough contrast. I think there was a lot of depth to each character, though, and you really got to see every character’s development.”

The direction of the show was wonderfully, tastefully done. The lighting was genuinely incredible and unquestionably one of the highlights of the entire play. Whether the lighting tinted the stage with warm yellows, created shadows of window shutters across the floor signaling time of day or washed the stage in a cool blue during Ceci’s fantasy monologues, it supported and emphasized the plot of the play and moved the show along when it (rarely) felt slow. The acting was also strong and passionate. Nonetheless, at times there did seem to be too much going on and not enough emotional build for the characters. The second half plateaued at a very intense, very heavy place. Being pummeled with so many different, important themes ultimately took away from each individual concept’s significance.

Overall, “Lydia” was a triumph. I’ve always believed that theater has done its job if the audience is left thinking, and I certainly was. With the tempestuous social climate of the early ’70s being so reminiscent of current events, the Flores family illustrates the real, pertinent struggle of immigration and finding identity —  a struggle still occurring today. If you weren’t left pondering how it’s possible that a show written decades ago could still be so relevant today, I hope you are now.