The scramble for seeding in conference tournaments will be rampant is these last weeks as programs nationwide seek to seize the opportunity to play in the NCAA Tournament.

Despite being en route to its fifth consecutive losing season with a record of 12-15 and 7-7 in the Big West, the UCSB women’s basketball team is hoping to maintain its fifth seed. 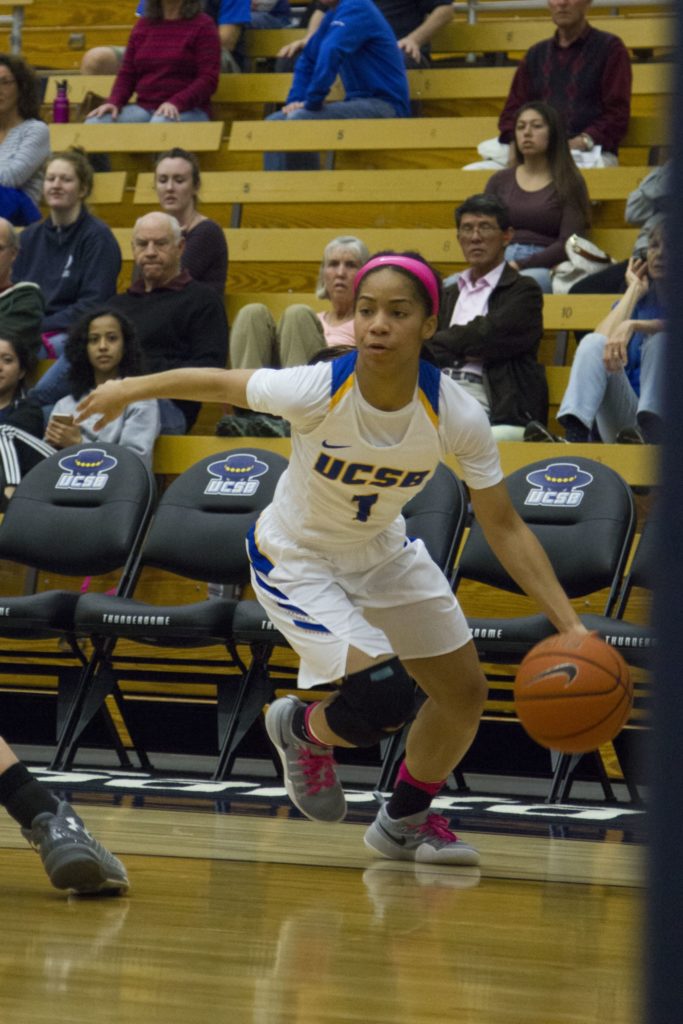 Drea Toler slides around the outside. Jenny Luo / Daily Nexus

Hoping to overcome a three-game losing streak, UCSB will be backed by its home court as it will end the regular season at the Thunderdome. The Gauchos will host UC Irvine this Thursday and Blue-Green rival Cal Poly on Saturday. Cal Poly will play in its last home game versus Cal State Fullerton before facing UCSB.

UCSB has the opportunity to secure the No. 4 seed if it can win its remaining games and if UC Riverside, which is currently in fourth, loses. A loss would land the Gauchos as the No. 6 seed.

If the aforementioned scenario occurs, although UC Riverside would have a better overall record than UCSB, the Gauchos would receive the No. 4 seed because of having the best win-loss record in conference games against common opponents beginning at the top of the standings, according to the Big West Tournament Regulations rulebook.

In this case, Santa Barbara would earn the fourth seed and a first-round bye because of its win over current No. 2 seed Long Beach State earlier in the season.

Just one game ahead of last place Cal State Fullerton with a 4-24 and 2-12 conference record, UC Irvine is on the verge of clinching the No. 8 seed for the third-straight year in the hopes of squeezing into the Big West tournament. Meanwhile, Cal Poly sits a game behind UCSB in sixth place at 10-16, 6-8 in Big West play.

UCSB will enter Thursday looking to extend its four-game winning streak against UC Irvine. The Gauchos have a chance to win the season series over UC Irvine in back-to-back seasons.

Dating back to when the two programs first faced each other on Jan. 28, UCSB recorded a program-high 15 made three-pointers and finished with season highs in points (85), field goal percentage (55.4) and win differential (25 points), all while tying its best three-point percentage (50).

Leading the Gauchos’ three-point barrage was freshman guard Aliceah Hernandez. She finished with career highs of 22 points and seven made three-pointers.

Since setting the new record, UCSB had struggled from beyond the arc, but seems to be getting back on track as it has shot over 30 percent from deep in two of its last three games in which it has made at least seven threes.

While Thursday could potentially be the game to reignite the Gauchos’ perimeter shot, it is also an opportunity for them to improve upon their ball movement and pace on offense.

Santa Barbara tallied a season-high 23 assists in its win over UC Irvine. The success from three-point land may have led to UCSB becoming too comfortable from deep as its sharing of the ball decreased.

In four of seven games, UCSB has recorded 20-plus three-point attempts and has had less than 20 assists in all seven contests.

Despite the statistics showing a decline, the Gauchos still own one of the best passing backcourts in the conference. Both point guards senior Onome Jemerigbe and redshirt junior Drea Toler rank top five in total assists in the Big West this season.

Toler leads all players with 118, while Jemerigbe is fifth with 103. Both remain in the top five in assists per game as well with Toler in third with a 4.4 average and Jemerigbe with a 3.8 average, respectively.

Success from behind the three-point line is influential on both sides as UC Irvine has become one of the top long-range shooting teams in the Big West.

The Anteaters are coming off setting a program high of 15 made three pointers in their loss to Long Beach State on Saturday. Senior guard Irene Chavez and sophomore guard Andee Ritter combined for 41 points and were responsible for 12 of the team’s three-pointers. Both knocked down six trey balls, marking a career high for Chavez.

Most notably, Ritter has made strides all season long as she currently leads the Big West in total threes and steals at 79 and 62, respectively. She is the only Anteater ever to make at least 70 three-pointers in a season.

UCI holds a Big West-leading 38.2 three-point percentage through conference play and is second in made three pointers with 107.

Looking ahead to the Cal Poly matchup, Saturday has the potential to be very intense as the two could be battling it out for a first-round bye.

The Mustangs will be in search of repeating last season’s series sweep after defeating the Gauchos 78-67 on the conference’s opening day.

Currently on a two-game losing streak, Cal Poly is led by junior guard Dynn Leaupepe, who is the team’s leading scorer at 15 points per game, good for fifth in the Big West. She has tallied 20-plus points in three consecutive games and four of the Mustangs’ last five contests.

Earning a season-high 29 points against UCSB earlier this season, Leaupepe will be the center of attention for the Gauchos’ defense as she has attempted a combined 48 shots in the team’s last two games.

Although UCSB’s promising start diminished as the season progressed, it still has a chance to end the season with a first-round bye for the first time since the 2010-11 season.

Tip-off between UCSB and UC Irvine will be Thursday, March 2 at 7 p.m. Santa Barbara will face Cal Poly on Saturday, March 4 at 4 p.m.