Six UC Santa Barbara faculty and staff members violated sexual violence and harassment policy between January 2013 and April 2016, according to documents obtained by the Nexus on Wednesday.

UCSB and nine other UC campuses first released Title IX documents on Tuesday in response to a California Public Records Act request made by the Daily Californian over a year ago.

The documents identify approximately 124 Title IX violations across the UC system between Jan. 1, 2013, and April 6, 2016. Four of six cases at UCSB were reported by students, and the remaining were reported by UC staff.

The only full-time professor named in UCSB documents was Gurinder Singh Mann, a professor of global studies.

The Title IX office received a complaint in May 2013 from a female student alleging that Mann acted inappropriately with sexual conduct, both verbal and physical, during a research discussion meeting at Mann’s home.

Mann retired in 2015 but was a professor at the time of the investigation, which began in May 2013.

According to the documents, the female complainant said Mann asked her to sit on his bed with him and proceeded to lay beside her. While sitting on the bed, Mann allegedly touched her neck and chest around the area of her collarbone.

She said he inserted his hand inside her shirt, touched her stomach and put his face near to hers. When she confronted him, he responded that “he’s not a dirty old man, that, for him, what he had done was just like petting his cat.”

The student later wrote an email to Mann saying, “this really was extremely uncomfortable for me, I still have nightmares about it.” She also alleged that Mann, on several occasions, would rub her arm, shoulder and thigh.

In the Title IX report, Mann denied all allegations of harassment and said his primary aim was establishing a Santa Barbara school of Sikh studies, not “playing with young people in any way.”

Following an investigation, the Title IX office concluded in August 2013 that all such claims “more likely than not did occur” and that Mann had violated the UC’s sexual harassment policy.

The documents do not indicate actions taken by the university, and Mann has since been a guest lecturer at UCSB after his retirement.

The female subject claimed that Sahuc had said on multiple occasions, “Are you on your period?” during lessons. She also stated that he repeatedly walked into the women’s dressing room unannounced while people were changing.

According to the documents, several other witnesses offered information illustrating patterns of sexualized comments from Sahuc.

Following an investigation, the UCSB Title IX office concluded that the alleged conduct “more likely than not did occur,” and that both allegations violated sexual harassment policy. 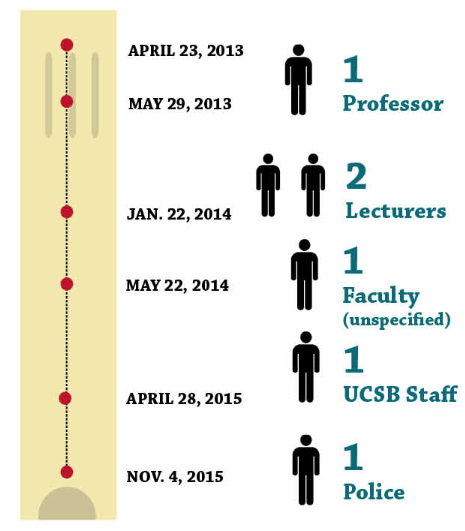 The female subject had previously complained to her supervisors about Marin’s conduct, but she received no resolution. A formal investigation began in April 2013.

As detailed in the documents, the complainant said while riding in an elevator together during their shift, Marin came up behind her as she bent down and put his hand on her back without her consent and made gestures “as to mock a sexual position.” After she told him he was being inappropriate, he responded that he would find her later and “violate/rape” her.

The complainant said Marin told her on several other occasions that she should “suck his dick,” asked her the color of her underwear and asked if the color of her pubic hair was the same color as the hair on her head.

The investigation also found that on an unknown date, coworkers found pornographic videos and newspaper clippings of the Nexus’ “Wednesday Hump” as well as “December 2006 Playboy Magazine Digital Edition” in his cleaning closet.

Marin denied all such claims, but the Title IX office substantiated all 11 sexual harassment claims against him. The university terminated his employment in July 2013 following the findings of the investigation.

The Title IX office received a report in April 2015 that a UCPD supervisor allegedly sexually harassed his female employee during an after-hours celebration at American Ale in downtown Santa Barbara.

According to the report, the male subject went to hug his employee and “grabbed her breast,” to which she “stood stupefied” and didn’t say anything. She went to push him away, but he “grabbed her face and stuck his tongue down her throat.” When she turned back around, he tried to hug her and “bit her neck, leaving a mark.”

The documents report that, when the female returned to the outdoor seating area, she informed the group that she was attacked. A witness reported to the Title IX office that the same male had “pinched his/her buttocks earlier that night.”

The male subject claimed he “blacked out” the night of the incident and could not respond to the allegations because he could not remember.

At the time of the allegation, he was working half-time in his department, and he became a full-time employee in July 2015.

As a result of the investigation, UCSB required the male subject to complete the university’s online sexual harassment prevention training and attend personal counseling.

The student claimed she was harassed through verbal conduct during piano lessons and that the male subject would comment on other women, saying “so-and-so’s boobs are hanging out,” “so-and-so’s ass cheeks are hanging out” and “women are provocative, and the things they wear seduce men, and it’s no wonder that all these women get raped.”

Another complainant said the music lecturer would tell her sexualized comments he made to other students like, “If this composer was here, he’d want to seduce you.”

The male subject denied the allegations against him, but the Title IX office concluded that the conduct “more likely than not did occur” and that the music lecturer had violated UC sexual harassment policy.

As a result of the investigation, the male subject received a 10 percent salary reduction and a written censure.

According to the female complainant, the male faculty member made jokes promoting rape culture that had no relevance to the class. The jokes were, “What was the wife’s favorite sex position? Facing Nordstrom’s.” and “Why were the sorority girls disappointed about being gang-raped? Because they had to write so many thank-you cards.”

The female complainant spoke out during lecture, saying that he was being inappropriate. The female subject dropped the global studies class that same day due to the “sexist classroom climate.”

She stated in her interview with the Title IX office that she could not concentrate for the remainder of the class because she was so upset by his comments. When asked what resolutions she sought through the process, she said that she did not believe the male subject should be teaching at the university.

According to the report, the male faculty member wrote through his attorney that he did not use the words “the wife,” “raped” or “sororities,” but admitted the jokes were made in poor taste.

Following an investigation, the Title IX office substantiated one of the three sexual harassment claims against the faculty member. The documents do not indicate whether the university took further disciplinary action.

According to UCSB Spokesperson Andrea Estrada, the university investigated and adjudicated all of the UCSB cases under policies and processes that have since been updated.

“Over the past two and a half years, UC has taken steps to significantly change — and improve — the ways such cases are handled,” she said in a statement.

Although UC Berkeley has not yet sent in its documents, the Daily Cal provided the number of sexual misconduct cases listed for its campus.

So, how long is it before the Daily Nexus gets its own Title IX complaint? Don’t be so quick to buy into this hysteria and removal of due process from the accused. You’re not immune. You’re next.

yes if you also have “pornographic videos … “December 2006 Playboy Magazine Digital Edition” in his cleaning closet.” The nexus by itself would mean nothing but taken in totality it does. dont cherry pick bits and pieces to try and make a BS point, unless you think the rest of the behavior is appropriate too?.

I object to a Title IX system that affords no protections to those accused, as we’ve seen repeatedly over the last few years. This sort of system has a powerful chilling effect on free expression and sexual behavior, and yes, if the Daily Nexus “hump” cartoons were used to prove a pattern of behavior that led to a Title IX violation, the Nexus could be next. I find that very concerning for free expression… but what am I doing, I should know by now that no one in the UC system gives one fuck about free expression.

Thats right Jason you are the only one. A hero that goes unrecognized except by your own over inflated sense of self and ego.
get over yourself free expression has limits. didn’t you graduate? Andrew Garshfield the UCSB freedom fighter for all people but the abused and oppressed.
You are right sexual behavior belongs in the work place and you have no problem glossing over all of the issues of harassment, abuse and sexual assault because the Title IX review doesn’t meet your standards.

I’m not alone. The College Republicans and Young Americans for Liberty are doing an incredible job without me! My flame continues to burn, and I am confident that it will ultimately set FIRE to the entire UC system.

Your ego is so utterly massive its gravity well is sucking in an entire solar system as we speak.

Wow when i think you couldnt be a bigger douche you just have to double down and prove me wrong. You wrote couple thought provoking articles and then graduated to being the biggest dick that you could raging about imaginary injustices. Turning your writing to inane pieces of shit about how you you have suffered and that you need to fix imaginary slights. Get a life

Cannot believe that supervisor was half time didnt get fired and became full time shame on UCSB.

Wow, and the Police dept still has him working there!! Good Job PD, rewarding sexual assault because that was not wanted. (no consent)

wow what a shame he should resign

But Andrew Garshfield supports it. Dont oppress the cop’s right to molest and assault people