The Daily Nexus
News
County To Reinstate Festival Ordinance for Deltopia 2017
March 1, 2017 at 12:12 am by Jose Ochoa

The Santa Barbara County Board of Supervisors passed a motion Tuesday introducing a bill to prohibit musical activities between 6 p.m. and 7 a.m. for this year’s Deltopia weekend. 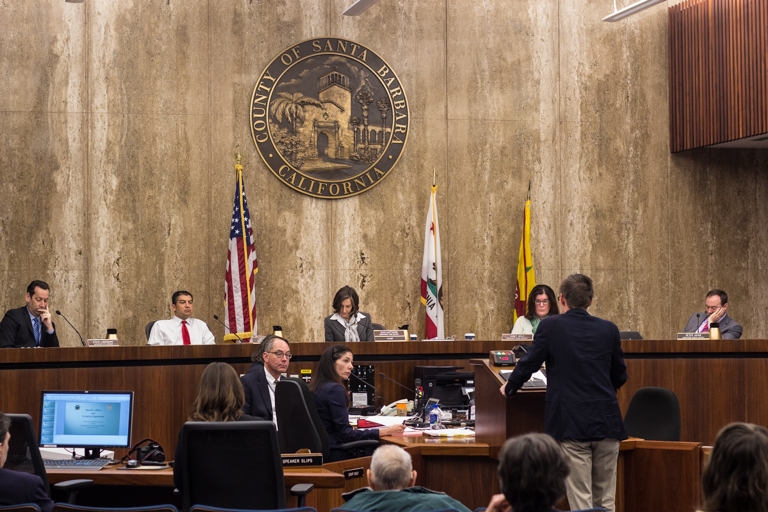 The Santa Barbara County Board of Supervisors met to discuss the extension of a festival ordinance to include this year’s Deltopia. Jose Ochoa / Daily Nexus

The bill would extend the ordinance from its current dates, which do not cover this year’s Deltopia. On the listed dates, the Santa Barbara County Code prohibits outdoor festivals or any similar musical activity, defined as music played at any location not built exclusively for that purpose such as a concert hall or music venue.

The amendment to the ordinance was initially proposed by the Santa Barbara County Sheriff’s Office on Feb. 14 and would extend the days to include this year’s Deltopia as well as the following six years’ celebrations, including Halloween.

The Board of Supervisors meeting next week will determine the adoption of the bill. Board members must vote to pass the amendment, though it is likely to pass as all five members of the board voted in favor of setting the date for the hearing at Tuesday’s meeting.

Commander Kelly Moore of the Sheriff’s office spoke at the board meeting to discuss the amendment and said the previous two years’ Deltopia events saw much smaller crowds as a result of the festival ordinance. Commander Moore said the 2015 crowd was approximated to be 10,000 and the 2016 crowd was near 3,500, compared to 2014’s estimated 20,000 to 25,000.

Several I.V. community members also spoke at the meeting, including I.V. Community Services District Director-elect Spencer Brandt, who said the festival ordinance is flawed but continues to be useful to law enforcement.

“The festival ordinance is an integral tool for the Sheriff’s Office and other partnering law enforcement agencies to make use of,” Brandt said. “While it is an imperfect solution, I see no reason why this policy shouldn’t be continued this year.”

The Associated Students Senate passed a resolution last week articulating the Senate’s position in favor of the amendment to the ordinance dates. Senator Batsheva Stoll, who authored the resolution, spoke at the board meeting to reiterate the Senate’s view on the ordinance.

Stoll said law enforcement’s presence at Deltopia could be a point of misunderstanding for students and stressed that police should work with campus organizations like UCIV to minimize potential conflict. UCIV is a volunteer organization at UC Santa Barbara that warns residents when they might be violating ordinances, connects students with medical services when needed and hands out free condoms and water during Deltopia.

“A lot of the time, there can be miscommunications with students and law enforcement, so we urge [law enforcement] to work with organizations like UCIV that volunteer to help students understand the law and kind of work as sort of a middleman to ensure that everything runs smoothly on Deltopia,” Stoll said.