The Daily Nexus
Sports
Gauchos’ Loss to UC Davis Results In Third-Straight Loss
February 27, 2017 at 11:12 am by Sean White

The UCSB women’s basketball team, which was in position to secure first place just over a month ago, continues to falter in its quest to secure a top seed in the Big West Tournament. 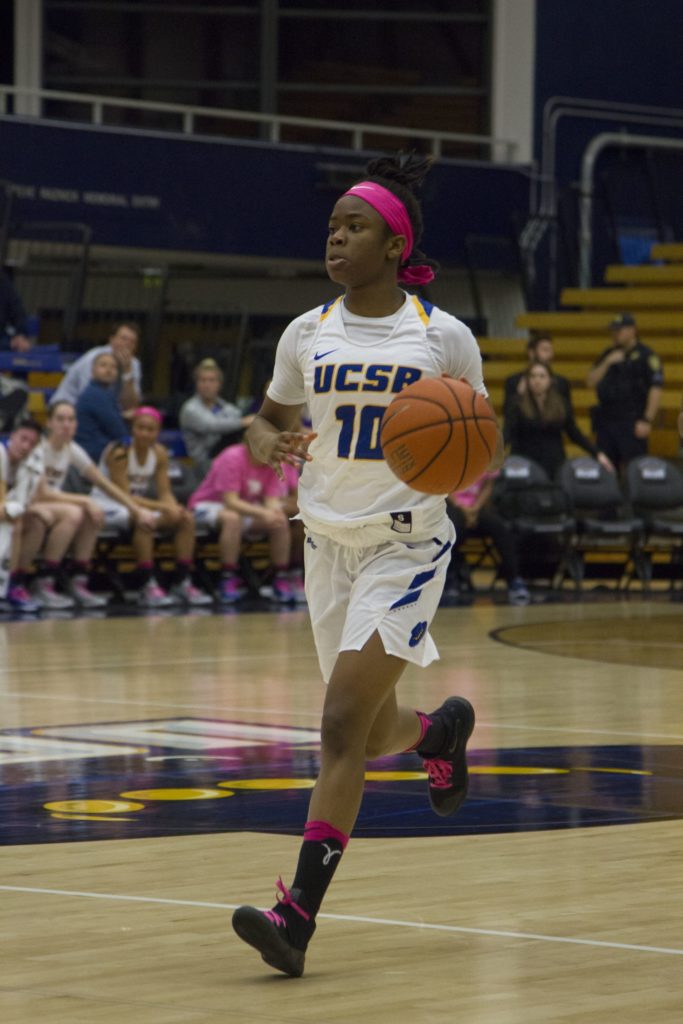 A 70-61 loss to UC Davis on Saturday handed the Gauchos their third consecutive loss as they have now lost five of their last six games, making them 12-15 overall and 7-7 in conference play. UCSB’s continuous slump lands it at fifth place in the Big West standings.

The likelihood of UC Davis locking up the No. 1 seed in the conference tournament increased over the weekend as it earned its eighth-straight victory to improve to 21-6, 12-2. Able to sustain its first-place rank in the conference, the Aggies’ streak is their longest since winning nine consecutive games during the 2005-06 season.

Prior to its matchup versus UCSB, UC Davis had shot 50 percent or above from the field in its last two games. The Aggies’ hot shooting continued against the Gauchos as they ended the game a shade below the aforementioned mark at 49 percent on 25-of-51 shooting, but they made up for it from beyond the arc, making 10-of-20, a major contrast to their 2-of-16 finish in the first meeting.

Redshirt junior forward Drew Edelman recorded her sixth double-double of the season as she led the Gauchos in scoring with 17 points and a game-high 10 rebounds. She finished 5-of-8 from the field and 7-of-7 from the free-throw line.

Two leads as the teams traded baskets in the opening minutes were UCSB’s only leads during the game.

Trailing 4-5, UC Davis made an 8-0 run that kickstarted the Aggies, who extended their lead as the game progressed.

Igniting the scoring stretch was sophomore guard Kourtney Eaton with a midrange jump shot. Never losing its lead after the field goal, UC Davis added to its lead with back-to-back made three-pointers by junior forward Pele Gianotti and junior guard/forward Dani Nafekh on its next two possessions to take a 11-4 lead.

Gianotti concluded Saturday with a game-high 19 points, going 6-of-12 from the field, 3-of-7 from long range and 4-of-4 at the free-throw line.

A quick layup by Edelman helped UCSB trim Davis’s lead to 13-7 at the end of the period.

Despite shooting just 34.8 percent from behind the perimeter (8-of-23), it was an improved shooting performance for the Gauchos, as it was their most made three-pointers since creating a new program record on Jan. 28.

Sophomore guard Coco Miller knocked down more than half of UCSB’s three-pointers, scoring the Gauchos’ first two field goals in the second quarter from downtown to cut their deficit to 13-18. Scoring each of her field goals from deep, Miller tallied 15 points on 5-of-12 and 5-of-9 three-point shooting.

After tying her career high of 27 points in the first game against UCSB, it was expected that redshirt sophomore forward Morgan Bertsch would be the Gauchos’ main concern.

Both Miller and Bertsch played pivotal roles in the second quarter; it was the game’s highest scoring period, with UC Davis taking a 26-21 advantage.

Miller scored 12 of her 15 points in the period on 4-of-6 shooting, while Bertsch scored 11 points and missed just one shot attempt as she went 5-of-6.

Although Santa Barbara held the potential Big West Player of the Year to 15 points, Bertsch was efficient with her shot selection as she finished the game 7-of-13 from the field. Her seven-straight points beginning at the 7:36 mark of the second period captured UC Davis’s first double-figure lead of the game at 25-13.

The Gauchos managed to come within a nine-point deficit after a made three-pointer by Miller, trailing 30-21, but could not contain the Aggies’ streaky shooting of 76.9 percent and entered halftime down 39-27.

Edelman scored the Gauchos’ first six points of the second half, yet it was their worst shooting quarter; they shot a horrid 18.8 percent from the field (3-of-16) and went 0-of-7 from three-point range.

Still, UCSB once again trimmed UCD’s lead to nine points at 33-42 after a pair of made free throws by Edelman.

The Gauchos’ comeback efforts were halted as UC Davis embarked on a 10-2 run to close out the third with its largest lead of the game, 52-35.

Despite trailing, UCSB performed best during the fourth quarter, outscoring the Aggies 26-18. It recorded a 56.3 field goal percentage and shot 50 percent from behind the three-point line.

While Edelman padded her stats with eight points in the quarter, redshirt junior point guard Drea Toler was vital during the Gauchos’ late spurt, scoring nine of her 13 points.

All nine points occurred in the game’s final three minutes, during which at one point she trimmed UC Davis’ lead to 63-56 with 1:36 remaining in regulation.

However, the Aggies’ clutch free-throw shooting — making 10-of-12 — led to them securing their victory in their final home game of the season.

UCSB will return home for its final two games of the season. It will face UC Irvine and Blue-Green rival Cal Poly.