The Daily Nexus
Sports
UCSB Set for Home Opener, Will Host Tulane University In Hopes of Resolving Offensive Issues After 1-3 Start
February 23, 2017 at 5:08 am by Jorge Mercado

Following a rough four games on the road to begin the 2017 campaign, the UCSB baseball team is eager to come back home and play its first games in front of its home crowd at Caesar Uyesaka Stadium as it takes on Tulane in a three-game series beginning on Friday. 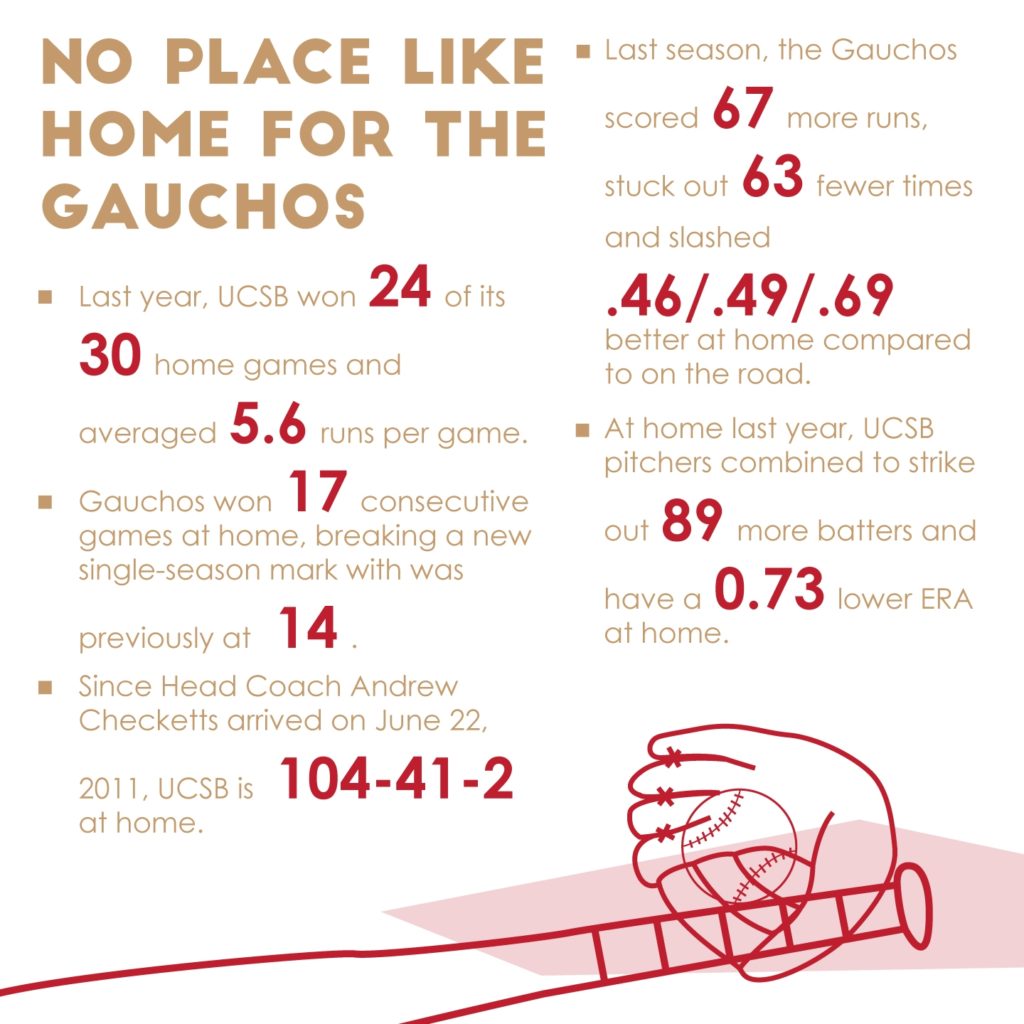 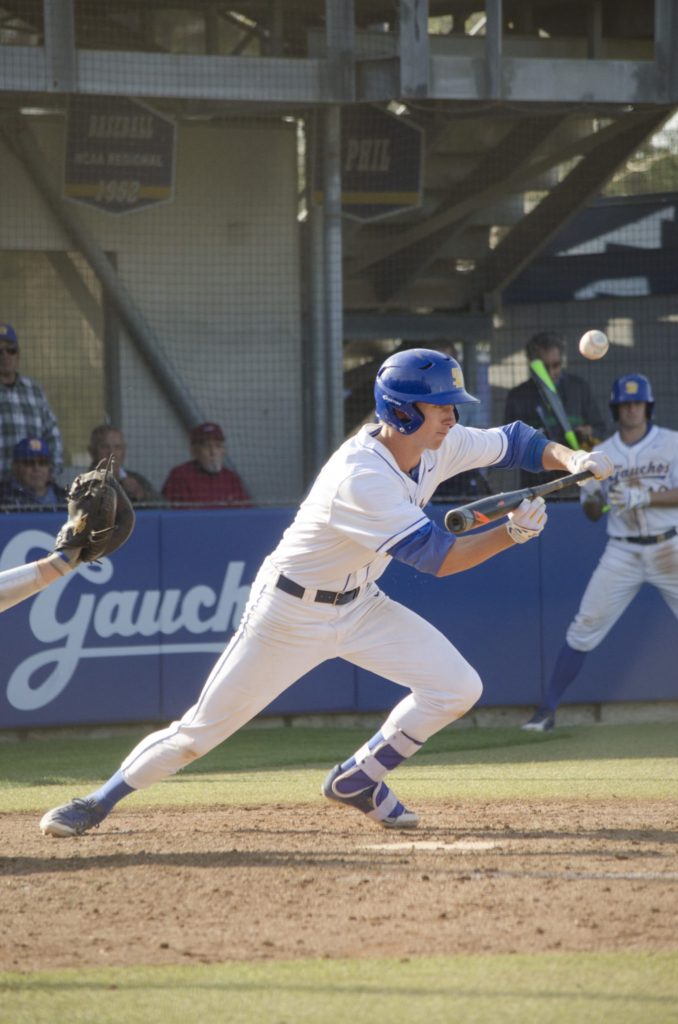 The Gauchos host the visiting Green Waves with a disappointing 1-3 overall record and are currently losers of three straight games.

After losing two of its first three games, Santa Barbara, who has originally ranked as high as No. 19 in the nation to begin the new season, was one of two teams to drop out of the top 25 nationally after a poor performance in its first weekend of baseball.

Tulane visits UCSB boasting a similar 1-3 overall record and is the loser of three straight after losses against Air Force and Army at home and a loss at Southeastern Louisiana earlier in the week.

Both squads have no experience as of late in terms of having faced off, but the two teams almost met last year in the Tony Gwynn Classic. Had Tulane defeated UC San Diego, then it would have played Santa Barbara in the championship of the inaugural classic, which UCSB won.

Another interesting tidbit is that the Green Waves actually defeated the Wildcats in that same tournament last season.

Experience was something the Gauchos expected they would be able to rely on heading into this season, as opposed to last year, but that has not been the case through four matches. In fact, UCSB looks like a completely different squad from a year ago after displaying many offensive struggles against Loyola Marymount and Cal State Bakersfield.

Two players that were key components of the CWS squad, redshirt junior J.J. Muno and junior Austin Bush, have struggled mightily thus far. The redshirt junior and true junior have combined to bat 1-29 at the plate this year and striked out a total of 12 times in 29 at-bats.

Last year, Muno had the best batting average on the team in players that had at least 140 at-bats after tallying 68 hits on 231 at-bats (.294), of which 18 were extra-base hits and five were home runs.

This year, the second baseman has yet to register a hit in 14 at-bats. While he has managed to drive in two runs, the struggles are certainly concerning seeing how big a role Muno played a season ago.

Bush’s struggles are on par with Muno’s as he is currently 1-15 on the season and has struck out a team-high seven times. The designated hitter is known to strike out a lot, as he proved last season with 60 strikeouts, the second-highest mark in the Big West; however, his game is predicated on his ability to hit the ball out of the park, something he did a lot with 11 homers, a league best as no other player registered double-digit home runs.

Despite this, one veteran who has continued to excel into the new year is junior Clay Fisher.

The shortstop currently ranks third on the team in batting average (.333) and is tied for first in both hits (5) and home runs (1). Fisher’s defensive presence is something that has garnered national attention since his acrobatic plays that made Sportscenter, which the Gauchos will also continue to rely on, as he has converted on three double-play opportunities.

UCSB will also hope to continue get great play from newcomers Colton Burns and Landon Silver. Burns, a junior college transfer, presently owns the best mark on the team in batting average (.385) and slugging percentage (.615). Freshman outfielder Silver has also been a welcomed addition, slashing .375/.444/.375 in three games played.

Pitching on the mound Friday will be sophomore Noah Davis, who put forth a spectacular start last week, which saw him earn his and the team’s first win of the year. Against LMU, the right-hander went six innings allowing only four hits, one earned run and one walk alongside four strikeouts on 74 pitches.

Sunday probable starter Joe Record will look to remedy a disappointing effort against Loyola, in which he only managed 3.2 innings allowing four runs, three of which were earned runs.

Junior Kyle Nelson turned heads on Saturday as he started the game. Primarily known as a reliever, the left-hander went four innings in his first start of the year, allowing five hits and one earned run which, unfortunately, was enough to hand him the loss.

The decision to start Nelson going forward will be interesting considering that, before the season, he was named the No. 6 reliever in the country by D1Baseball and was included on the NCBWA Stopper of the Year Watch List for the second time in his career.

For Tulane, taking a series from a serious contender for making the NCAA regionals again would be a huge boost in turning around this season and looking more like the team from a year ago that made it as far as the Oxford Regional.

Aiming to defend its AAC championship, the Green Waves will primarily rely on senior Hunter Williams, who currently holds the team’s best batting average after going 7-16 (.438) through the first four games. The infielder is also a threat with the long ball, as he already has two homers and is currently holding a slugging percentage .875.

Senior Corey Merrill will also be a tough play on Friday. The right-handed pitcher had a solid first outing pitching seven innings and allowing only six hits, two earned runs en route to a victory.

Despite the slow start, this certainly does not entail a bad season for UCSB.

Four games is hardly a sample size worth noting when deciding to write a team off, especially when one factors that Santa Barbara’s most effective players have had early season struggles.

Once those are corrected, who’s to say what could happen?

To put things into perspective, current No. 15 Arizona started last year 2-3 before getting back on track and going on to have a spectacular season, finishing 38-20 on the year and making its college world series appearance. Point being, UCSB has plenty of time to get things in gear, but getting started sooner rather than later would be ideal.

UCSB begins a three-game series with Tulane at 2 p.m. on Friday, Feb. 24, at Caesar Uyesaka Stadium with Saturday and Sunday’s games taking place at the same location and beginning at 2 p.m. and 1 p.m., respectively.