The Daily Nexus
Sign of the Times
Trump’s Mainstream Media Accountability Survey: A Desperate Attempt to Shape Public Opinion
February 23, 2017 at 5:00 am by Brian Wheat

On Thursday, Feb. 15, the Trump administration released a questionnaire called “Mainstream Media Accountability Survey.” The survey, coming on the heels of Trump’s first substantial press conference, is meant to gauge the American public’s opinion on, essentially, the journalistic integrity of the mainstream media, largely consisting of the big three: CNN, MSNBC and Fox News. It is no secret that the president has a particularly antagonistic relationship with the media, even worse than that of George W. Bush. Trump, in his press conference, mentioned on several occasions what he perceives as ubiquitous and flagrant media bias against him. During the conference with the media, he denounced alleged dishonesty of CNN while praising “Fox and Friends” on Fox news. Of the mainstream media, he quipped that they have worse approval ratings than Congress. 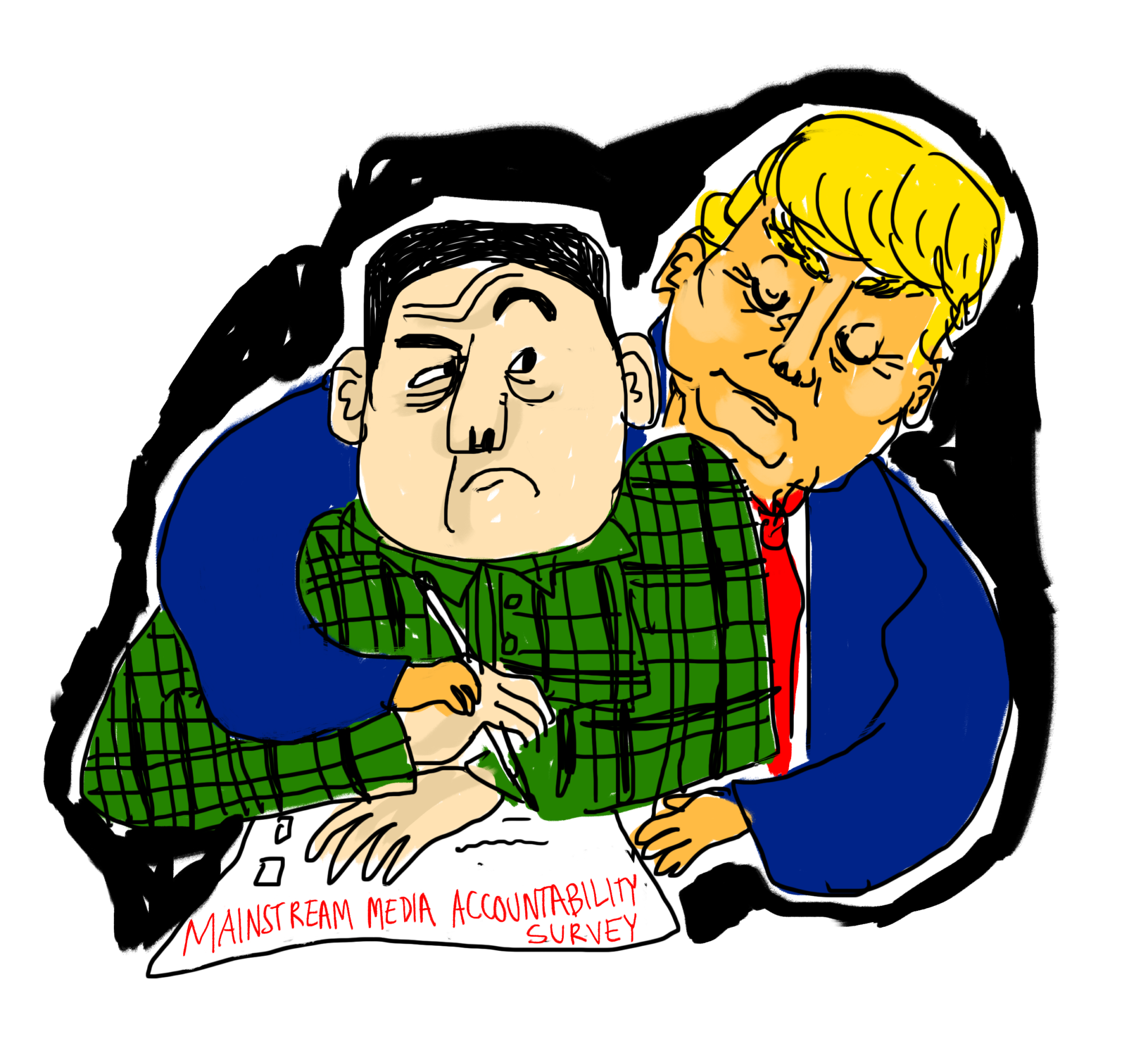 The survey itself consists of 25 questions asking about whether or not the reader believes that the mainstream media reports fairly on a wide variety of topics including the president himself, the president’s executive orders (including the travel ban), the fairness of each mainstream media outlet individually and if the media is responsible when reporting on developing news stories.

What is notable about this survey, however, is that nearly every one of the questions is suggestive to the point where they practically can only result in one answer if the reader is informed in current events. For example, question 12 states: “Do you believe that political correctness has created biased news coverage on both illegal immigration and radical Islamic terrorism?” Regardless of whether or not the participant answers “yes,” which is favored by the structure of the question, it still suggests that it is the case that political correctness influences the media’s coverage of Islamic terrorism and illegal immigration.

It must even begin to wear on people who voted for Trump. Even the most ardent and fanatical Trump supporter can only tune out the truth for so long.

The question here is clearly designed to deliver an answer that agrees with the president’s charges against the media. Moreover, the survey itself is found on GOP.com, which is a website paid for by the Republican National Committee. This, of course, would further skew the results in a glaring sampling bias which, if the wording of the questions did not result in the desired answer, the sample taken from the mostly Republican participants would.

It could be said that Trump wouldn’t care about being called out for being a liar. Lack of evidence has never stopped him from misquoting or making up a statistic before. True, but then again, even Trump hasn’t gotten media and popular backlash like this before. I know, that sounds ridiculous, even for Trump. But think about it; when Trump was on the campaign trial, all of the bad press he was getting was actually helping his visibility and his poll numbers somehow. Now that he’s actually the president, all of the lies and the bullshit that he’s generally throwing out isn’t getting brushed off anymore.

People and the media are being more and more aggressive against Trump’s lies and alternative facts and even Republicans are beginning to grow wary of it. He simply can’t keep up this business of lying to the American people with impunity. It must even begin to wear on people who voted for Trump. Even the most ardent and fanatical Trump supporter can only tune out the truth for so long. His approval rating is now at 39 percent and falling, according to Pew Research. He can’t keep this up indefinitely.

Making him seem at least a little more credible is one thing, but it’s probably not enough to make a dent in his current PR hell. He also has to reinforce his support base and try to influence other people who may not be fully on board with him as well. He could do this with this survey in two ways; Danielle Kurtzleben of NPR offers some other ways that the president may be using the survey to manipulate public opinion.

Biased questions can plant ideas in people’s heads. If Jane Doe happens to be a Trump supporter and a Christian, she might not think that she’s being particularly hurt by news organizations — until she sees a question like, “Do you believe that people of faith have been unfairly characterized by the media?” In this way, this survey is a cousin of the “push poll,” which is often performed during political campaigns as a way of slinging mud at an opponent under the guise of survey research.

Kurtzleben also suggests that the survey could be a tool for the Trump administration to test which ideas resonate with Trump’s supporter and those on the fence, as well as building lists of people who are sympathetic to conservative politics and who Trump will want to try to win over to his side. It seems unlikely that these tactics will work in the way that the president hopes; I am skeptical. Nonetheless, I do not appreciate one bit the seemingly desperate attempt for the president to gain legitimacy using underhanded tactics to get people to at least say that they agree with him at a time when the most vocal of what seems like a majority at this point are against him.

Brian Wheat wonders just how far President Trump will go in his battle with the media.

This “survey” is a textbook attempt at rigged (i.e., fake) presentation of public opinion. The questions are blatantly at odds with basic of the principles of empirically valid survey composition. they are a childish attempt at conveying a false presentation of public opinion. Had I students who proposed such childishly biased methodology I would have considered my teaching on the topic of survey construction either inherently flawed or my students to be incapable of discerning the most elementary constructs in an empirical examination of attitudes. This is true regardless of whether (as, sadly, already in evidence) posters can point to… Read more »

The survey is not the problem. The problem is the (lack of) character of the press and the (lack of) quality in their product. Typical bait and switch to distract from the real issue at hand on the part of Trump’s political enemies. Quit worrying about a survey, start using your brain to consider what issues are real and which matter to you and your country. Use your own memory and think before you react to media propaganda from either side.

My comment was in reference to the pathetic and fallacious survey. Full stop. I should have not posted my comments as a reply to your post — my bad: I should have made my response stand-alone. If you have other issues that, in your view, are “real problems” that is dandy. But try to stay focused on the content of my post. If you have something to add about the quality of the survey (+ or -) then say so. BTW: “Use your own memory and think”?? What does that even mean? Ten bucks says you cannot define the word… Read more »

So propaganda from the White House isn’t an issue at all? Lies are only lies when they come the press? Not buying it.

The media isn’t a monolithic entity with a single agenda. People who complain that media is terrible are probably consuming terrible media.

That survey was fucking pathetic. Besides the slanted questions and desired answers, it was also an attempt to generate a mailing list (participants had to supply their names and email address at the end of it). I really wonder if Trump is going to make it through a full term.