The Daily Nexus
Sports
Gauchos to Participate in Mary Nutter Collegiate Classic
February 23, 2017 at 5:01 am by Liam Bailey

Another busy weekend is fast approaching for the UCSB softball squad as the team travels to Cathedral City, Calif., for the Mary Nutter Collegiate Classic. The weekend will hold several top-notch programs, including the Oklahoma State Cowboys, No. 15 Tennessee Volunteers, Purdue Boilermakers, No. 20 Missouri Tigers, No. 8 Washington Huskies and No. 21 Arizona State Sun Devils. 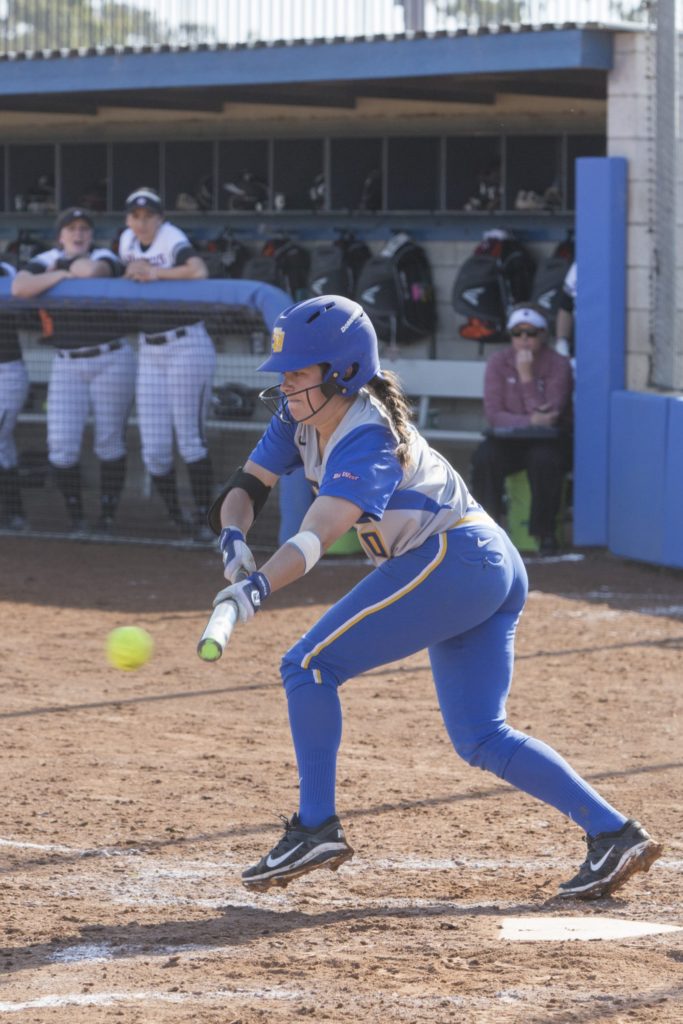 Only the Cowboys and Boilermakers rank outside the top 25 in the USA Today/NFCA Coaches poll, assuring the Gauchos will have their work laid out for them as they are indeed hoping to surmount the .500 mark this weekend. UCSB is currently 3-5 and will enter the invitational having won its last two.

Oklahoma State will lead things off this Thursday. The Cowboys are owners of a 5-5 record yet are losers in their previous two matches to South Florida and Binghamton by a combined 11 runs.

Infielders Rylee Bayless and Taylor Lynch, a junior and sophomore, respectively, are the two big bats in the Cowboys lineup, with the former slashing an incredible .423 batting average/.571 on-base percentage/.654 slugging percentage to start the season.

Bayless has added 11 hits, nine walks, three doubles, one of the team’s only three home runs, six RBI and six runs scored, the final two being tied for team highs.

Lynch has an impressive .394/.405/.545 slash line in her own right and leads the team with 18 total bases, while Bayless is second with 17. She, too, has six RBIs, combined with four runs scored and a team pacing five doubles.

The Cowboys boast two pitchers with winning records, senior Brandi Needham and first-year Logan Simunek. Needham has thrown two complete games, both shutouts, and holds a 1.66 ERA to go with a 3-1 win-loss record. She’s up to 14 strikeouts in 25 and a third innings pitched so far, more than doubling her earned run total of six over that span.

The younger Simunek has appeared in seven of the 10 Oklahoma State games this season, and though her 3.42 ERA and 2-1 record don’t quite live up to the potency of her ace partner, the first-year has certainly held down the fort during her 14 innings of work.

Interestingly, neither pitcher has allowed opponents to hit over .273 so far in 2017, so the Gauchos will need to reverse that trend as OSU will likely be one of their easier opponents at the tournament.

Tennessee, the Gauchos’ next opponent in Thursday’s doubleheader, will enter Cathedral City undefeated. Coming off two straight shellackings in which they put up 14 runs on Oregon State and nine runs on New Mexico State, all while allowing no runs of their own, the Volunteers will be thirsty for blood and looking to improve their national rank against what appears to be an inferior UCSB opponent.

The Volunteers boast several players with the potential to hit for power, most notably thus far being junior infielder Meghan Gregg and sophomore catcher and infielder Abby Lockman.

Gregg leads the team with 18 RBIs, though Lockman is close on her tail with 13 of her own. They’re slugging an earth-shattering .964 and .842 respectively, the highest for players on the team who’ve participated in each of the Vols’ 10 games.

On top of that, Gregg and Lockman are part of a three way tie for the team lead in home runs at two apiece, though they are just two of seven players to send one over the fence so far this season, emphasizing the penchant for offense on this Tennessee team.

The Vols also rely on two workhorses within their pitching staff in sophomore Matty Moss and freshman Caylan Arnold. The two are responsible for nine of the team’s 10 wins, 49 of the team’s 57 innings and 53 of its 58 strikeouts. No one has been able to crack these two so far, though the Gauchos will take their shot Thursday.

Purdue is UCSB’s only opponent on Friday, and their easiest one of the weekend. With only a 1-8 record, Purdue has lost four-straight games, including the final two only lasting five innings before ending due to the mercy rule.

No one has hit a home run yet for the Boilermakers, and junior outfielder Maya Hughes, senior infielder Kristen Hoppman and sophomore utility player Mallory Baker are the only three batters approaching good seasons. Each holds a batting average over .260 — over .345 in the case of Hughes and Hoppman — and an on-base percentage over .345.

Maddie Damon and Katie Johnson, a sophomore and senior respectively, have thrown the most innings on the team, just over 20 each, though Damon’s 1-1 record and 2.16 ERA is much more enticing compared to Johnson’s 0-5 mark and 9.33 ERA.

The Gauchos’ second nationally ranked opponent of the weekend will be the Missouri Tigers.

This matchup will be the first between the two programs and will feature freshman shortstop Braxton Burnside. She will try and extend her two-game streak with a home run, and improve her already stellar average of .318.

Burnside will be joined by fellow first year, outfielder Cayla Kessinger, who after a rough start to the season, has torn it up in her last two games, collecting four hits in six at-bats, three runs, a homer and a double.

UCSB will face two West Coast opponents on the final day of the tournament, starting Sunday against Washington and finishing it with Arizona State.

Those who made the final decision in the scheduling of games certainly put the Gauchos’ greatest challenge at the end of the weekend.

Washington has only one blemish on their roster, a 4-2 loss to BYU (now ranked No. 23), and has won its last six games, most recently an 8-0 shutout of the CSUN Matadors.

Sophomore Taran Alvelo got the win in the contest, driving her record to 5-0, and junior Casey Stengel was able to keep her power streak alive, blasting one over the fence for the second game in a row.

ASU is led by senior shortstop Chelsea Gonzales, the power hitting machine who’s slashed .538/.559/.885 in 10 games this season. Over that span, the Sun Devils have held a 9-1 record, due directly to the 14 hits, four doubles, one triple, one home run, 10 RBI and 23 total bases achieved by Gonzales.

She’s propped up by a swell pitching staff, where each of the four dealers have at least two wins and an ERA no higher than 2.10. Junior Breanna Macha has thrown the most innings with 26, though first-year Giselle “G” Juarez and junior Dale Ryndak are the team’s strikeout queens with over 20 apiece.

The Gauchos are still led by senior outfielder Kristen Clark in the lineup, holding a .519 average and .563 OBP, to go with 14 hits, two doubles and four RBI (Clark was finally able to draw a couple walks last weekend which had been a problem for her early in the season).

Sierra Altmeyer, the sophomore infielder for the Gauchos, is third on the team with 12 total bases and is slashing a solid .333/.448/.500 in 2017, giving the Gauchos a glimmer of hope looking forward on offense.

UCSB will still rely heavily on sophomore Veronika Gulvin and first-year Felisha Noriega, as both pitchers have crossed the 20-inning threshold on the season. Gulvin has her ERA down to 4.20, but Noriega’s 9.48 mark, combined with the atrocious ERA of the two pitchers behind them, is certainly cause for concern if the Gauchos’ two aces can’t handle the entire load this weekend.

The action all begins Thursday at noon against Oklahoma State, and rounds out the evening of Sunday, Feb. 26, with Arizona State at 2 p.m.