The UCSB men’s basketball team will host UC Riverside this Thursday at the Thunderdome in what will be its final home game of the year.

Still 4-21 on the season and at the bottom of the Big West with a 2-11 record, the Gauchos are hoping for another win, looking to catch No. 8 seeded Cal Poly. UCSB’s four wins have all come at home this season, and there would be no better place to get its fifth. 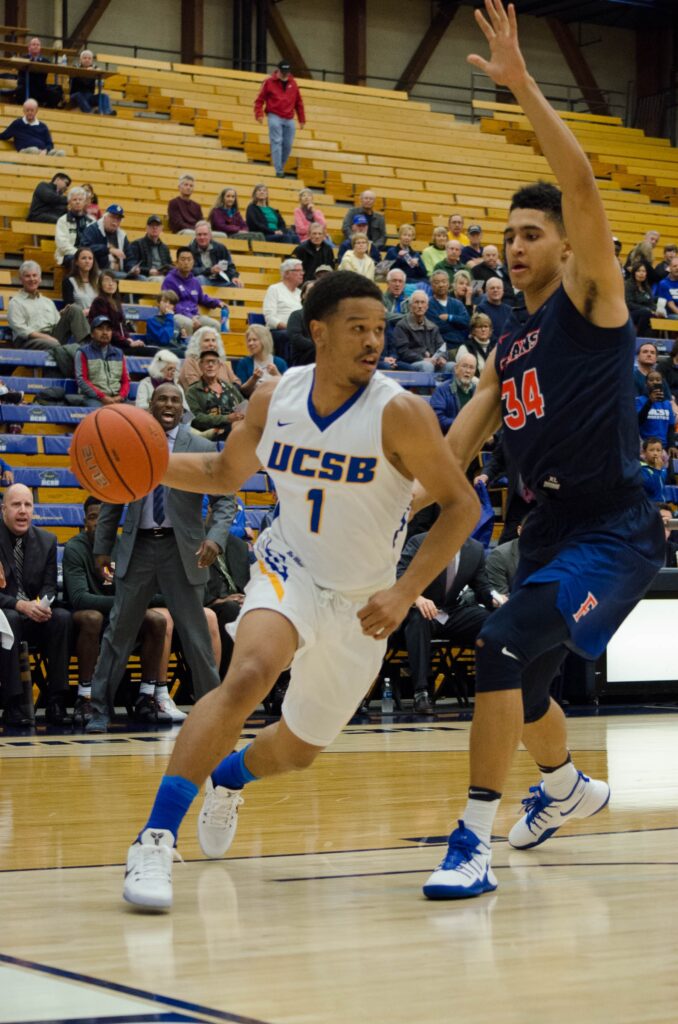 With the Highlanders sitting only two spots above the Gauchos in the Big West standings at 7-17 overall and 5-8 in the conference, this could be an opportunity for Santa Barbara to make up some lost ground. Currently on a four-game losing streak, UC Riverside has only had a slightly better season than UCSB.

The last time the two teams met was in Riverside, where the Gauchos lost 65-55 and were mostly carried by injured junior guard Gabe Vincent, who scored 18, but will be unavailable to play in the upcoming match.

In the previous game, four out of five Highlander starters scored in double figures as well as freshman guard Dikymbe Martin from the bench.

Martin started in their most recent matchup with UC Irvine and was able to score nine points in a losing effort.

UC Riverside has four players standing at 6’8” and taller and it will be up to the UCSB bigs, such as junior forward Alex Hart, freshman center Tyler Jackson and sophomore forward Maxwell Kupchack, to protect the basket.

Hart has truly stepped up in the last five games and just in the nick of time. Not only has he scored the brunt of the Gaucho baskets since Vincent has been out, but he has played with a noticeable energy and fierceness to the last minute of the game.

In his most recent game against Long Beach State, he only put seven on the board, but before that he scored 16 points in the victory against Hawaii last Thursday and has been an essential asset to the team, starting the last five games averaging 12.2 points per game.

Despite only scoring four points, Gaucho freshman guard Christian Terrell had a solid game against LBSU as he tied his career-high grabbing nine rebounds. Although Terrell has had some hesitation in the past when it comes to taking the shot, he has started in six conference games so far and continues to improve.

Overall, the Highlanders’ field goal percentage is 42.1 while the Gauchos are barely hanging onto their 37.1, a league-worst mark. An unfortunate recurring theme for the UCSB team is their inability to shoot with accuracy. The trouble is not getting to the basket but getting the ball in the basket.

Aside from Hart and team leader senior guard Eric Childress, freshman guard Max Heidegger is an explosive player that drives hard and puts points on the board, yet with so many top players unable to participate, the Gauchos are suffering as clearly demonstrated in their record.

One area that Santa Barbara does excel in, at least ever so slightly better than UCR, is rebounding. The Gauchos are averaging 36.6 per game compared to the Highlanders’ 34.8, showcasing how they are getting in there and grabbing the ball off both offensive and defensive glass.

UCR has a fantastic free throw percentage of nearly 73 percent on the season compared to the Gaucho percentage of 64 percent. In their most recent game, UCSB had 17 personal fouls called on them; against a team as accurate as Riverside, the Gauchos will have to play smart and not commit as many fouls, especially on the offensive end.

For Childress, Thursday will obviously be an emotional night as it will be his final game wearing a Gaucho uniform in the Thunderdome. The senior will look to cap off his home career in the right way improving upon his team-high 8.5 points per game, 3.5 assists per game and 2.2 steals per game, also a Big West best.

The co-captain of the team alongside Vincent, Childress has played on some great Gaucho teams, and although this wasn’t the ending he expected, a win could mitigate some of the damage done to his senior season.

As the season winds to a close, all teams are trying to bring in as many wins as possible heading into the Big West tournament. As this will be each team’s second to last game, expect both teams to bring all they have got to the court.

The UCSB Gaucho and UCR Highlander game will take place this Thursday, Feb. 23, in the Thunderdome at 7 p.m.