The Daily Nexus
On the Menu
Putting Diet Resolutions to the Test: A Week of Healthy Eating
February 22, 2017 at 12:00 pm by Tiffany Velazquez 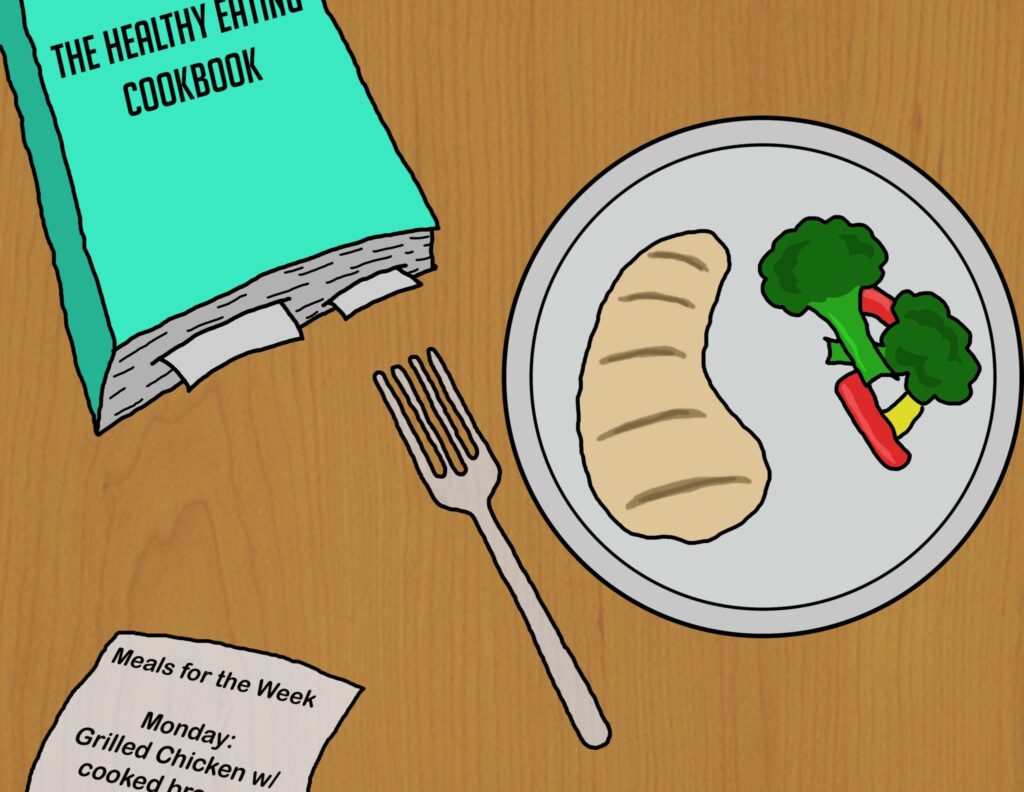 2017 is fully upon us, and as we’re only a few months in, it can become difficult to maintain our resolutions. Similar to just about every other person out there, I found myself promising to eat healthier in the new year in the hopes of having at least enough energy to make it through my classes. Obviously, I realized this would take some work, so I decided to try out a week of “healthy” meals and go from there.

For the first official day of my healthy week, I chose to go for a familiar favorite, grilled chicken breast. However, while I usually get lazy and just throw together some spinach as a weak attempt at eating greens, I chose instead to cook some broccoli and bell peppers. It not only made for a great tasting plate, but a colorful one, too. 239 calories

Friday went similarly to Thursday, but this time I opted for a lean-cut steak and a side of grilled broccoli and potatoes. The potatoes were new to me, a strange concept when you consider the fact that I essentially like and will eat anything with potatoes in it. It definitely made for a good meal, reminiscent of something you would order at a diner. 343 calories

Saturday did not go over terribly well; it included a trip downtown with my roommates who essentially forced me to eat out. To compensate, we opted to eat at Chipotle, which is not too bad when you compare it to places like McDonald’s. In the end, I settled on a chorizo bowl with black beans, white rice, lettuce, mild salsa and cheese. 760 calories

On Sunday, I chose to go for a classic favorite: pasta. Seeing as the idea was to eat better, I threw in some spinach, chopped bell peppers and grilled chicken to round out the meal. All in all, I think it was a nice way of incorporating a little nutritional benefit into what is otherwise essentially just a bowl of carbs. 479 calories

Monday could have gone better.  It was a long weekend; I elected to use the extra day I had to get ahead on my readings for the week. This meant that rather than prepare a whole new meal, I simply reached for the pasta I had left over from the day before. I could not exactly let good food go to waste, after all.

Tuesday’s meal had to be my favorite, not only for its taste, but also because it perfectly exemplified what I was trying to do this week. I went outside of my comfort zone, choosing to try out a chicken salad recipe I had been eyeing on Pinterest. I was not only able to feed myself and my friends, but there were also enough leftovers to have lunch the next day. 1523 calories

Seeing as how I was supposed to be eating healthier this week, I ended on a rather bad note, having a plate full of enchiladas for dinner. That may not sound terribly unhealthy until you consider that I chose to cook my tortillas in oil before moving on to the chili. While it was a very filling and satisfying dinner, I could have forgone the oil to make the meal more nutritious. 991 calories

All in all, I feel that despite some minor setbacks, the experiment proved to be successful. I was able to get a feel for what cooking healthy would entail and can definitely see myself continuing on with it. I would, however, make an effort to plan ahead, not only to limit trips to the market, but also to make it easier for myself to stick to my “healthier” diet.

Here is the recipe from Tuesday:

½ rotisserie chicken, diced (although you can cook it yourself if you have the time)

1 large apple, chopped (I chose to use a Gala apple)

Large-leafed lettuce of your choosing or pita bread

Add the chicken, apple, walnuts and celery together into a large bowl. Gently fold the mayonnaise into the salad until all the components are evenly coated. Fill a large-leafed lettuce or a pita with the salad and enjoy!