The Daily Nexus
Opinion
Stoner Etiquette: A Beginner’s Guide
February 20, 2017 at 7:00 am by Laurel Rinehart 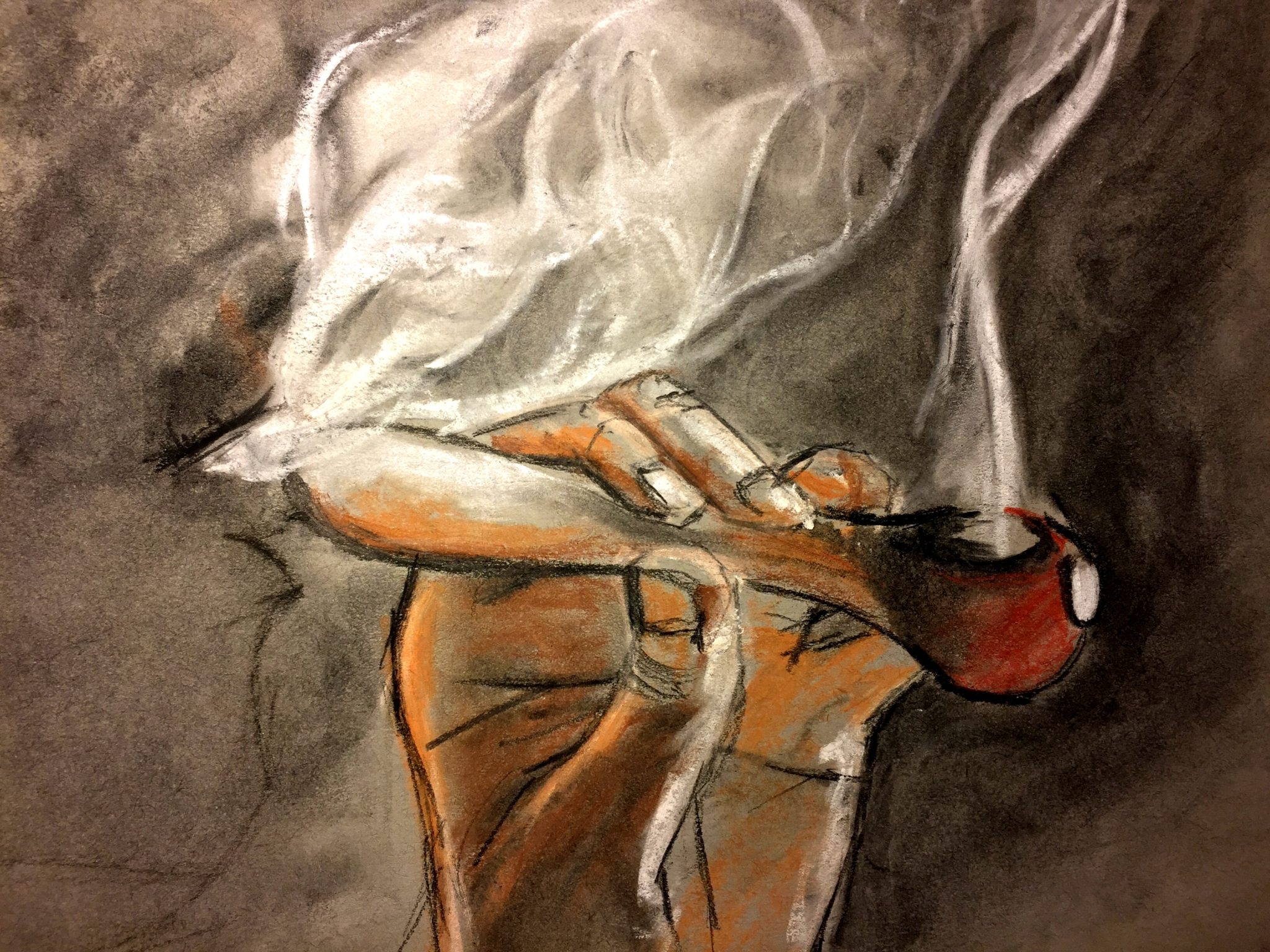 Don’t chew with your mouth open. Use your right hand to shake. Say “Thank you” when someone holds open the door. Raise your hand before speaking in class. These are all simple etiquette rules that seem to come naturally to us in everyday situations, but there was a time during which we were fully unaware of them and had to be educated by patient parents and teachers. Just like every social ritual, smoking weed has its own set of etiquette rules the nascent stoner must come to learn. Like most cultural norms, these rules are unspoken and therefore somewhat subjective. In general, however, there is a set of conventions that holds empirically true in almost every smoking circle. I’ve unwittingly violated this unspoken code countless times, often humiliating myself in the process. If you want to skip this trial-and-error period, consider my guidelines and your deafening cough will be the only thing that will give away your novice status to experienced smokers.

In my opinion, the Golden Rule of smoking etiquette is whoever supplies the weed generally has the final say in everything that happens during the smoke sesh. Think of them as the captain of your trip, in control of both resources and protocol. This means they decide how much to smoke, who gets the first hit, what piece will be used and most other aspects of the process. If someone else is supplying other items, especially a piece or grinder, that person also has a stake in the decision-making. Everyone else in the circle, however, is getting high off the generosity of their friend with the connection. It’s a classic beggars-can’t-be-choosers scenario: You didn’t bring the bud, so you don’t get to decide how the bud is smoked. There are some nuances and variations to this rule, but as a general guideline, respect your supplier.

Here’s another overarching principle I want to cover before we get down to the nitty gritty: When it comes to weed, pay it forward. I just talked about having proper respect for your friend with the hookup. Think back to the first time you smoked, or, if you’re a true beginner, ask the token stoner of your friend group about their first time. Your supplier may have been your friend from NorCal who was rolling flawless cone joints before you had ever gotten up the courage to steal a cheap bottle of wine from your parents’ pantry or an older sibling who finally decided to invite you to “take a walk” with the older kids before Thanksgiving dinner. Everyone has a weed fairy godparent who enabled their first time getting high, and these veteran smokers had their own enablers in turn. A few years down the line when you have your own collection of pipes and miscellaneous lighters, remember the first person who smoked you out and make sure to extend that same generosity to those in need around you. Think of this as a deposit in your karma rainy day fund; It’s never a bad time to pass the blunt if you want it to come your way in the future.

With those parameters in mind, let’s get down to actual smoking protocol. Assuming you have a group together and someone brought the goods, you’re ready to get going. So once the bowl is packed, who gets to hit it first? The decision of who gets greens is one that should be made intentionally, especially when smoking out of a pipe or bong, because the bowl gets more and more tarnished each time it is hit. In most cases, refer to the afforementioned “Golden Rule”: It only makes sense that the person who brought the herb should get the most prime hit. However, if another person hooked it up with a fancy piece or provided a grinder, that person should also be considered for the honor (especially if this is their first time ever using said paraphernalia). Additionally, whoever has been selected for greens can always defer the hit to someone else. This brings it back to my “pay it forward” maxim.

Even if you are entitled to the first hit, consider passing it on to someone else as a friendly gesture. This isn’t required, but it’s an opportunity to bring positivity to the smoke sesh and encourage your friends to pay it forward as well. After the designated first person has taken their hit, they pass to the left and this order is maintained for the rest of the smoke sesh. Don’t change the rotation; it ensures that the hits are evenly distributed among all participants.

Once the ganj has been sparked and the rotation established, the question is what to do when it’s your turn to inhale. The tactic you will use depends on your group’s smoking method of choice. The usual options are pipes, bongs and joints. If this is your first time smoking one of these ways, or your first time ever, don’t be afraid to ask the more experienced stoners in your group to give you the rundown. You might feel embarrassed identifying yourself as the only beginner, but it’s much better than the alternative. I have a friend who was with a girl he liked the first time he hit a pipe, and wanted to seem like a seasoned stoner to impress her. Instead of properly lighting the greens on top, he held his lighter to the bottom of the bowl as if lighting a crack pipe because his only knowledge of drugs came from watching “Law & Order.” This situation made for a hilarious party story years down the line, but it could have been easily avoided. You don’t need to make a fool out of yourself like this; simply ask your friends for a little guidance. They once were exactly where you are now. Don’t sweat it.

The actual technique of inhaling is best learned in person, but I’ll mention a few manners to keep in mind if you don’t want the smokers around you to get silently pissed off. First of all, when you’re hitting a pipe, make sure to corner the bowl. This means positioning your lighter so you only ignite a small portion of what has been packed, leaving ample greens in the bowl for successive hits. I can’t tell you how many times I’ve watched someone hit a freshly packed pipe and then pass me a bowl full of ash because they didn’t aim their lighter and torched the entire bowl in one hit. This is not only annoying as hell because the process must be halted to pack another bowl, it’s also inconsiderate to everyone else in the rotation because you’re consuming a large portion of weed that was intended to be evenly dispersed to the group. The technique of cornering can be hard to master at first, but at least be aware of its importance and don’t be afraid to ask someone to show you how.

If you’re hitting a joint, make sure to grip it by the roach. This is a small piece of cardstock, most likely ripped from an index card once your friend has given up studying for their upcoming midterm, rolled up and placed in the end of the joint as a filter. Use this as your grip because the portion of the joint containing the actual weed is more fragile and prone to ripping. Your friend who has just spent a considerable amount of time ripping up their study material and carefully rolling this joint will not be happy if you destroy their hard work because you didn’t know the proper way to hold it.

If you make it safely through your first hit without committing any of the faux pas mentioned above, you might be wondering how many hits are socially acceptable to take before handing it off. Everyone has heard the ancient proverb, “puff, puff, pass.” However, is it really okay to take multiple hits before sending it down the line? In my opinion, the answer depends again on how you’re smoking. With a joint, it’s absolutely okay to take two or even three hits in a single turn. This is because joints last longer than bowls and each successive hit is pretty much the same as the last, so no one is going to be sweating over the possibility of not getting a prime hit. With bowls, however, the situation is different. Each time you light a bowl, a significant portion of its surface area is burned, especially if you don’t know how to corner properly. For this reason, I consider it rude if someone lights a bowl twice in one turn. If the bowl stays cherried (ignited) after you light it, however, it’s acceptable to take another quick toke before passing it on. With bongs, one rip is the maximum before passing it on. Trust me, taking multiple bong rips straight in a row is a punishment you wouldn’t want to endure even if it was socially acceptable.

It’s called “puff, puff, pass” for a reason; don’t be that person who only remembers the first part of the saying.

Once you’re done with your hit, make sure to pass it on to the next person as efficiently as possible. There is nothing more awkward than a smoker who thinks they’re captivating their audience with a mundane childhood story when in reality everyone is just staring at them, waiting for them to pass the bowl. It’s called “puff, puff, pass” for a reason; don’t be that person who only remembers the first part of the saying. Also, make sure you pass the lighter as well. This seems like it would be easy to remember, but most people have at least a few memories of tearing apart their surroundings along with the entire group searching for the lighter, only to realize they were holding it in their hand the whole time. If you finish your hit and it seems like the bowl is completely ashed, check with your friends before dumping it out immediately. One man’s trash is another man’s treasure; just because you think a bowl is spent, doesn’t mean someone else won’t want to try hitting it one last time.

Finally, keep in mind that your friends will always appreciate a compliment on their piece and an inquiry about how they got it. For whatever reason, most stoners cherish their pieces as they would a first-born child. They have names for each one and many stories associated with them, which they’re always happy to share with anyone who asks. This is another bonus that isn’t required but is guaranteed to liven up your gathering.

If you make it all the way through your smoke sesh without violating any of these etiquette rules, treat yourself to a bag of your favorite munchies (I recommend Chex Mix) and a drink to mitigate your oncoming cotton mouth. If not, don’t worry; everyone loves telling stories about stupid shit they did when they were first learning to smoke. Either way, you and your friends will be high enough at this point that anything you did will be a source of insatiable laughter until the high wears off and it’s time to go outside for round two.

Great to see some good writing these days in the Nexus. Well done!

Really solid article. I wish more stoner resources like this were available when I was a sapling.