There was no benefit to its homecourt advantage once again as the UCSB women’s basketball team was defeated by Cal State Northridge 62-55 Wednesday night at the Thunderdome. The Matadors have now won the season series over UCSB.

Santa Barbara was simply outhustled. Outrebounded 53-36, UCSB had no answer for the Matadors’ sophomore center Channon Fluker, who notched 17 points and tied her career-high of 20 rebounds. Fluker’s 14 defensive rebounds are the second most in a single-game in CSUN’s Division I history.

“The discipline for us right now, and the fight for us has just been gut wrenching for all of us,” Head Coach Bonnie Henrickson said. “If we can’t knock down the three, which we hven’t for three games, somebody’s got to put it on the floor and get to the rim, and get fouled. We missed 18 layups. We got too many [girls] that just played the three-point line.” 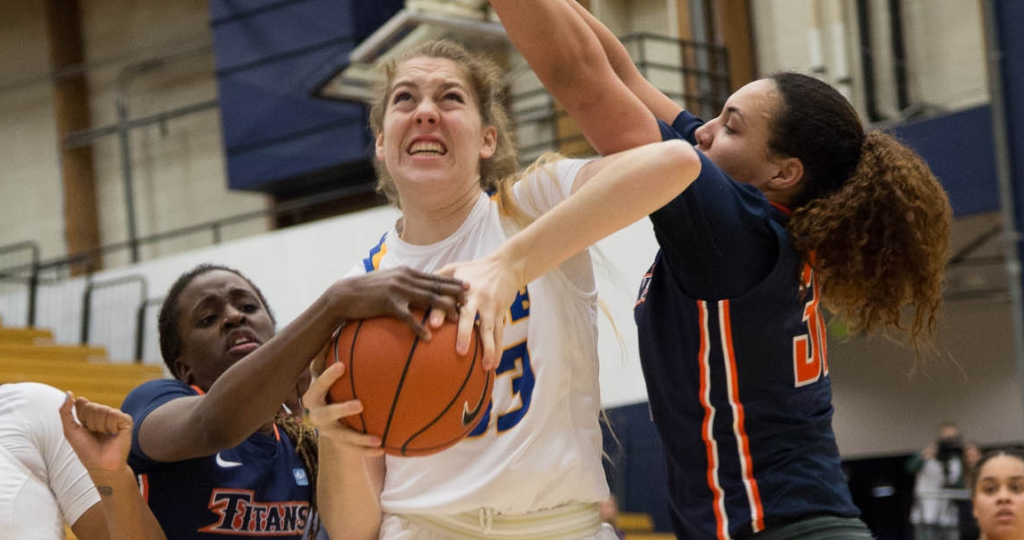 UCSB ended the game with a 23.1 three-point percentage as it shot 6-for-26 from behind the perimeter. It’s the fourth time in five games that the Gauchos have shot below 30 percent from beyond the arc.

Now on a two-game losing streak, the Gauchos fall to fourth in the Big West standings at 11-12, 6-4. Just one conference win away from tying UCSB, CSUN won its fourth-straight to improve to 12-11 and 5-4.

It was an undisciplined start for UCSB’s offense in the opening minutes of Thursday’s game as the Gauchos had three turnovers in their first five possessions.

While UCSB dealt with miscues, CSUN gradually established a rhythm that led to its 7-0 run and lead.

Beginning with sophomore center Channon Fluker and ending with a three-point make by junior guard Serafina Maulpe, the Matadors seemed to be on their way to repeating their 48 percent shooting percentage in the first meeting.

Maulupe finished with a game-high 22 points, 17 of which she scored in the first half.

Yet, halting CSUN’s run was the subbing in of redshirt junior point guard Drea Toler at the 6:32 mark as she served as the catalyst to the Gauchos’ 8-0 run. She scored a team-high 12 points, a game-high six assists, and six rebounds.

The string of points began with Toler grabbing a defensive rebound, then driving coast-to-coast for the foul and score before converting at the free-throw line to score the team’s first field goal of the game. A made layup freshman guard Aliceah Hernandez gave UCSB its first lead of the game of 12-11.

The Matadors regained their lead of 12-11 as a result of a made free-throw by Maulupe. With the shot clock off, CSUN ended the first period with a 14-11 lead after a spin and layup by freshman guard Hayley Tanabe.

UCSB found itself on the downside of a run once again in the opening minutes of the second quarter as CSUN put together a 9-2 run, in which Maulupe scored seven points during the stretch. Scoring points both in the lane and from behind the perimeter, CSUN’s all-around scorer handed the Matadors their first double –figure lead of the game of 23-13.

Despite inconsistencies from beyond the arc, UCSB had some peak moments along the perimeter. Knocking down some major deep shots were both Redshirt sophomore guard Sarah Porter and freshman guard Aliceah Hernandez with back-to-back three-pointers to decrease the team’s lead to four 23-19.

Porter recorded 10 points on 4-of-10 shooting, 2-of-7 from long range. Hernandez nearly posted a similar outcome with eight points while finishing 3-of-9 and 2-of-7 from three-point land.

Providing hustle off the bench was junior forward Taylor Farris, scoring UCSB’s final two field goals of the half with a baseline floater and jumper. In 16 minutes of play, Farris had six points and three rebounds on 3-of-8 shooting.

As the Gauchos inched closer and closer to trimming their deficit, CSUN would respond each time.

Quietly emerging for CSUN with a perfect 4-of-4, 2-of-2 three-point shooting performance was senior guard Emily Cole. It was her two made three-pointers in the final three minutes of the first half that curtailed UCSB’s momentum, as one of her deep range makes allowed the Matadors to enter halftime with a 33-25 lead.

The exchange of baskets between both teams continued in the third quarter as CSUN maintained a lead of at least seven points for the entire period.

After coming up empty-handed in its first two possessions of the second half, a drive and drawing of a foul by senior point guard Onome Jemerigbe gave the Gauchos life despite her being unable to convert at the free-throw line as UCSB would trail 33-27. Jemerigbe tallied six points and three assists.

Maulupe and Cole were the Matadors’ source of offense in the third, combining for nine points on 4-of-7 shooting.

Entering down nine points 46-37, the fourth quarter turned out to be the Gauchos most productive quarter as they honed in scoring the ball to amass a 10-3 run during the period.

Their defense played a critical role in the stretch of points as they held CSUN to just one point in the first three and half minutes of the final period.

The peak of UCSB’s run began with a three-point make by sophomore guard Coco Miller, who brought the Gauchos closer to Northridge’s lead 49-44. Miller concluded Thursday with seven points as her only two field goals in the game were from behind the three-point line.

Following Miller’s make was the Gauchos’ press defense which forced CSUN into a 30-second shot clock violation with 5:18 remaining in the game. Porter would then hit a three-pointer to bring UCSB within a two-point deficit of 49-47.

Yet, overshadowing UCSB’s comeback effort was Fluker’s outburst of 13 fourth quarter points. In addition to going 3-for-6 from the field in the quarter, the star center was most proactive in earning 14 free-throw attempts, making half of them.

A rebound and putback score by Fluker put CSUN up 51-47. UCSB continued to chase the Matadors’ lead but could never fully contain their hustle on the boards which led to various trips to the free-throw line and a loss.

UCSB will begins its four-game road trip this Saturday, Jan. 11 at Hawaii at 7 p.m. at the Stan Sheriff Center.