The Daily Nexus
Sign of the Times
The Curious Case of Kellyanne Conway
February 9, 2017 at 5:00 am by Hannah Jackson 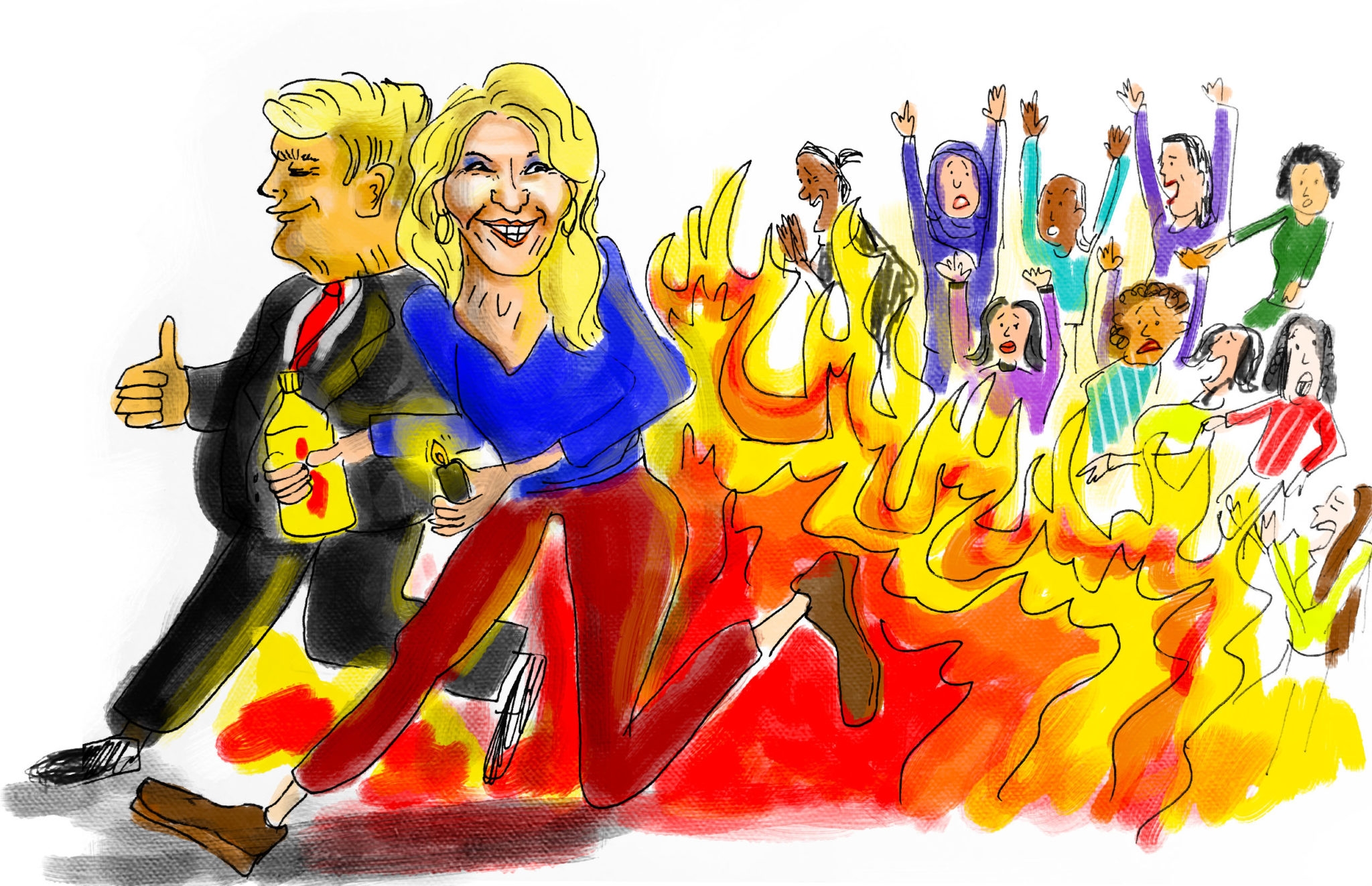 In the United States, monumental success for women in politics is rare; there has yet to be a woman elected president or a significant number of women elected to serve in Congress. That being said, the 2016 election was a milestone year for women in government. We saw the first female nominee of a major party, a record number of women elected to office and Kellyanne Conway — the first woman to run a successful presidential campaign.

The case of Kellyanne Conway is an unusual one. She came on as Donald Trump’s campaign manager in August 2016, after Corey Lewandowski and later Paul Manafort resigned from the position. Conway managed to turn Trump’s raging dumpster fire of a campaign — whose highlights included him referring to the size of his genitals in a debate, mocking a disabled reporter, calling Mexicans drug dealers and rapists and the release of a video in which he boasts about “grabbing them by the pussy,” in case you forgot — into a historic victory. Say what you will about Conway, but it is undeniable that she is good at what she does and that she is dominating the world of politics.

Every week brings a new story of Conway spinning information and twisting rhetoric to advance the conservative agenda, leaving viewers and media alike utterly stunned. Her impressive, albeit dangerous, control of language and ability to lie with ease have made headlines since the beginning of her stint as Trump’s campaign manager, but one instance in particular stands out. Conway infamously claimed on “Meet the Press” that Press Secretary Sean Spicer did not lie about the size of Donald Trump’s inauguration crowd, but that he simply presented “alternative facts,” ushering in mockery and awe from both sides of the aisle.

Now Conway is using her spinning skills to justify Trump’s ban on Muslims entering the country. In an interview with Chris Wallace, she claimed that the barring of people entering the United States from seven Muslim-majority countries did not constitute a total ban, saying, “What about the 46 majority Muslim countries that are not included? Right there, it totally undercuts this nonsense that this is a Muslim ban. This is a ban on travel, prospective travel from countries, trying to prevent terrorists in this country from countries that have a recent history of training and exporting and harboring terrorists.” In the past, however, Conway has supported immigration reform, stating so recently as 2014 that she favored paths to citizenship for undocumented immigrants.

She has skillfully wielded her womanhood like a weapon and turned what is usually a negative feature in the boy’s club of politics into a profitable empire. ”

Conway’s terrifying control of language is not the only reason she got to where she is today. She has capitalized on her status as a woman in politics to further her career at the expense of other women. At the age of 28, Conway left her job at Republican polling firm the Wirthlin Group to start the Polling Company, a firm that catered to Republican candidates trying to gain popularity with women. Her high-profile clients have notoriously bad track records regarding their stances on women’s rights and have included former Speaker of the House Newt Gingrich, current Vice President Mike Pence and former Missouri Representative Todd Akin, who famously claimed that the human body will prevent pregnancy in the case of “legitimate rape.” Conway has used her political expertise to put men who lead the crusade against women’s rights into office. 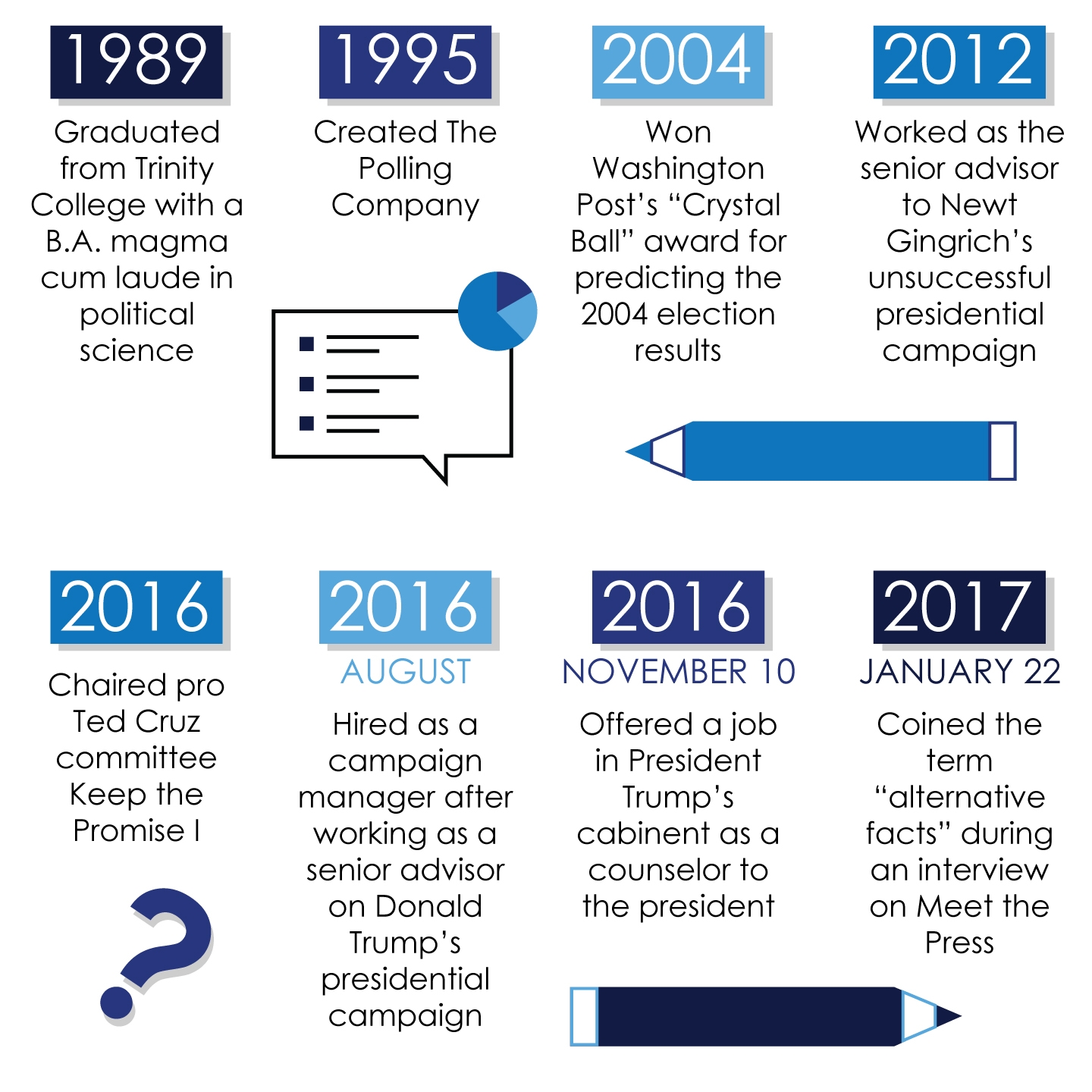 What I find truly unfortunate is that Conway has all the makings to be a great feminist and role model. However, Conway identifies herself as a “post-feminist” — one who believes women are more suited for traditionally feminine, domestic business, which I find ironic due to her massive success in a male-dominated industry. Being raised by four women and coming from humble beginnings, she attended Trinity College and earned a doctor of jurisprudence with honors from George Washington University Law School. She clerked for a judge on the Superior Court of D.C., started her own company and co-wrote a book called What Women Really Want: How American Women Are Quietly Erasing Political, Racial, Class, and Religious Lines to Change the Way We Live.

Now as the first woman to run a winning presidential campaign and as the highest-ranking woman in the White House, it is disheartening to see Conway continue to fight against abortion and healthcare rights and flip her stance on immigration in order to support an administration that is dead set on depriving women, racial and religious minorities, immigrants and the poor of their rights and safety. She has skillfully wielded her womanhood like a weapon and turned what is usually a negative feature in the boy’s club of politics into a profitable empire. As a woman, Conway should be advocating for other women and using her position of power for good, but sadly, her step forward is two giant steps back for American women.