Another disappointing loss at UC Irvine pushes the UCSB men’s basketball team losing streak to seven. Losing 47-64, the Gauchos took a blow to the ego as well as its now 3-19 overall record. No. 2 in the conference standings and overall with a 14-12 record, UCI performed as expected. 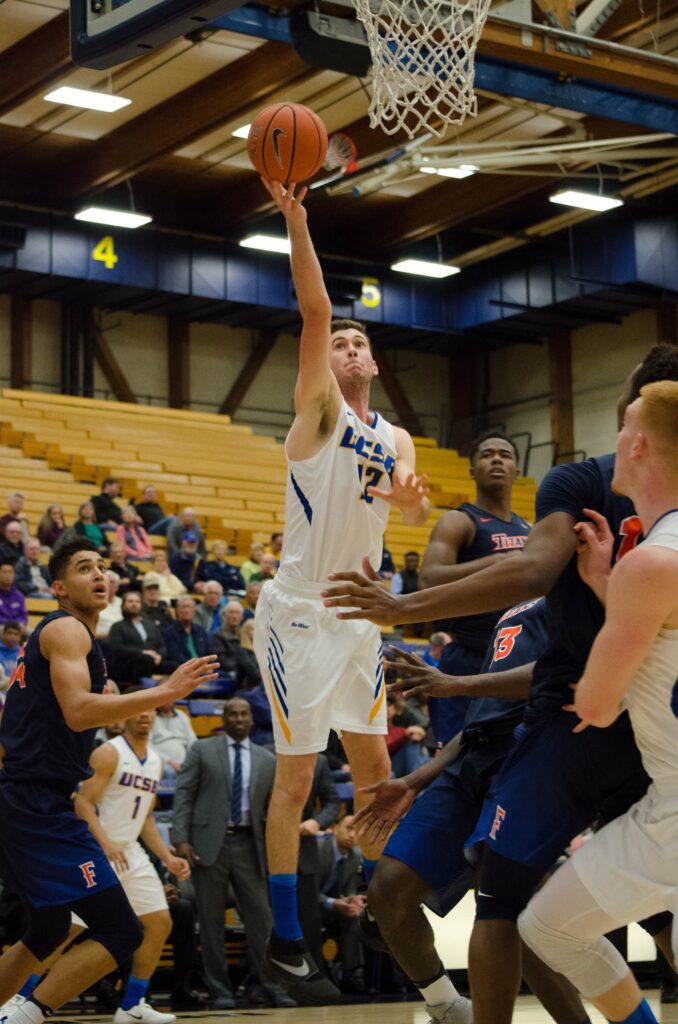 The Gauchos have not only had a tough season on the court, they now are missing many of their best players. Junior guard, team leader, and top scorer Gabe Vincent is out of the game and not coming back anytime soon due to an injury. Without their shooting powerhouse, the Gauchos have a ton of ground to make up.

Starting off the scoring in the 18th minute, the Anteaters did not give the Gauchos a second of breathing room. Scoring 12 points before the Gauchos could even get a second basket, UCI started off strong and never let up.

UCSB was unable to get any more points on the board until the 12th minute when freshman guard Max Heidegger made a three-pointer. Unfortunately, the Gauchos were experiencing the same problem they have had all season: getting the ball into the basket. The team was able to get off 10 shots in 10 minutes but only completed two of them.

Starters sophomore forward Maxwell Kupchak and freshman guard Christian Terrell each had a tough first half, both going 0-3 on shooting and each getting called personal fouls.

When playing the No. 2 team in the conference away and without some of their best players, the Gauchos really needed to bring a new level of play to the court, but they could not quite pull it off.

As the first half went on, scoring on both sides of the court slowed as the teams subbed around, both trying to find a good rhythm. The first period ended after a layup from Gaucho senior guard Eric Childress immediately followed by an Anteater three-pointer by senior center Ioannis Dimakopoulos. With Gauchos down 18-27, things were not looking bright.

In the first 30 seconds of the second half, UCSB junior forward Alex Hart made a layup, just one of his seven baskets during this game. This half the Gauchos needed to figure out how to start getting points on the board, and Hart absolutely made that happen.

After only scoring two free-throws in the first half, Hart had a perfect game, making every shot he took in the second half and adding 14 to the Gauchos’ score. In 13 minutes of playing time during the second half, he made the biggest impact for UCSB by far.

Although Hart was able to score a career-high of 16 total points, one player was no match for the Anteaters. The Gauchos only allowed four more points to be score in the first 15 minutes of the second period, but they were not scoring any at all.

By the middle of the second half, Irvine had established a solid nine-point lead that the Gauchos were having serious trouble breaking. It was not until the 11th minute that Santa Barbara clearly had no steam left. UCSB trapped with 27 on the board for three full minutes, the Anteaters were able to take the opportunity to grab another eight points.

From that point on, Heidegger and Hart carried the team as best they could, but could not keep up with Dimakopoulos, sophomore forward Johnathan Galloway and freshman guard Eyassu Worku.

Santa Barbara ended the game with a 34.5 field goal percentage while Irving finished at 41.7 percent. Although their shooting has not improved, UCSB did manage to profit 12 points off of turnovers, a skill the Gauchos struggle with.

UC Irvine was absolutely a tough opponent, but UCSB has the chance to turns things around as the team travels to take on Cal State Northridge on Saturday, Feb. 11.