Emma Stone and Ryan Gosling arrived at the Santa Barbara International Film Festival on Friday, Feb. 3, to a massive reception. Hundreds of fans screaming in unison heralded their arrival at the Arlington Theatre as they stepped out of their midnight-black cars. The two stars of “La La Land” had come to receive their Outstanding Performers of the Year Awards alongside their director, Damien Chazelle.

After the picture-palace had filled every seat, Board President Lynda Weinman emerged to thank the show’s sponsors and drew attention to how SBIFF is, unlike many other festivals, primarily educational. Then she introduced the show’s veteran moderator for the evening, Roger Durling, who hailed the night’s guests as “intelligent and amiable” and “an average-looking sex-symbol.” Whomever he was referring to is up to you.

Then the lights dimmed and a montage of the two performers’ roles played onscreen to the tune of the film’s opening song, “Another Day of Sun,” played live on a century-old organ. After it sank beneath the floor, Gosling and Stone walked onstage to a standing ovation.

It did not take either of them long to charm the already won-over audience, with a stoic Gosling dryly noting that the photographers camping out in front of the stage were shooting his every twitch. Stone, meanwhile, jokingly referred to Gosling as “Rysies” and announced her goal to make Durling snort as much as possible for the night’s duration. If only she could hear the man in the audience whose laughs sounded like a duck’s mating call.

Their careers were reviewed through clips and Durling’s commentary: Gosling rose to dramatic prominence as a Jewish Nazi in Henry Bean’s “The Believer,” despite Bean’s skepticism over the role going to a “Mickey Mouse Club” alumnus. Stone dropped out of high school at 15 to act and, like her “La La Land” character, spent months auditioning without success. She eventually came to win the hearts of her fans in “Superbad” and “Zombieland.”The two first appeared alongside each other in “Crazy, Stupid, Love” and established a rapport after improvising together during their audition. 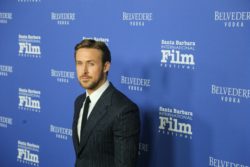 Gosling wound up getting involved with “La La Land” when he recognized Chazelle in a restaurant and approached him. The two spent the whole night talking about musicals like “Singin’ in the Rain” together. Stone was a little more cautious over joining the film, as she had not sung in years. However, the two were given three months to prepare for the film, the most time, Stone said, she’d ever been given to prepare.

“Did you ever go up to Damien one day and ask him, ‘You’re crazy, there’s no way this is going to work?’” Durling asked her. 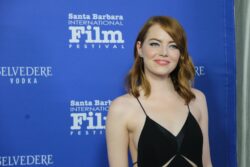 For a moment, Stone looked genuinely confused as to why he would ask her such a thing, before replying, “No more than six.” More laughs, more snorting, more duck mating calls.

“We love you, Emma!” someone calls from the crowd to the actress’s delight and to cheers of agreement. Gosling stares, almost forlornly, at the floor.

“You too, Ryan!” Both actors burst out laughing with the crowd.

Eventually, Chazelle came onstage to mark the night’s end. As dozens of flashing camera lights attempted to blind him, he told his stars, “I do believe you two are some of the best actors working today,” and he called their participation in his film “a dream [he thought] would never come true.”

Gosling and Stone happily accepted their awards, then used the rapier-like ends of the golden statues to duel onstage.  “You could do some real damage with this,” Gosling joked.

After the show, they exited through the back of the Arlington into awaiting long, black, glamorous Chevrolets. Fans eager to get a closer glimpse or even a photo stood behind metal barriers being carefully monitored by security guards. Gosling emerged to renewed squeals with Stone following right behind. After taking a brief minute to interact with their belated fans, they left in their dark chariots to (most likely) return to the sun-kissed lands of La La.