Now at the halfway mark of its conference schedule, the UCSB women’s basketball team is in a position to recapture first-place in the Big West standings entering tonight’s home game versus UC Davis.

Currently tied with Long Beach State for second in the standings, the Gauchos are 11-10 and 6-2 in conference play. For the first time since Dec. 2013, UCSB owns an overall record above the .500 mark, and will look to extend its four-game home winning streak. 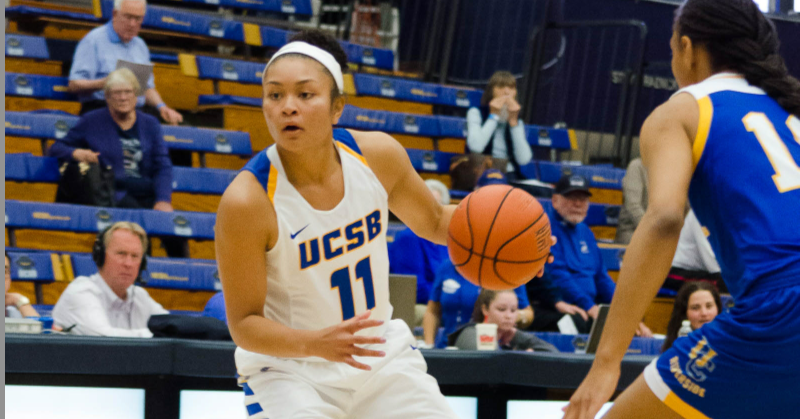 Visiting the Thunderdome on a three-game winning streak, UC Davis sits atop the Big West with the league’s best overall and conference record of 16-6, 7-2.

UCSB is coming off its best defensive performance of the season, in which it held Cal State Fullerton to a season-low 37 points. Most notably, the Gauchos’ bench was pivotal in their 20-point victory, outscoring the Titans 30-2 in bench points.

Responsible for a tied game-high 14 of those bench points was redshirt junior point guard Drea Toler.

Over the span of the Gauchos’ last five games, Toler has undoubtedly been the team’s flare off the bench on both the offensive and defensive ends of the court, especially during the conference schedule.

During Big West play, Toler is second on the team in scoring with an 11.5 points per game average. She has tallied double-figures in five consecutive games and is shooting 54 percent over the span of games.

Her ability to penetrate the paint and find open shooters continues to be beneficial as well as she is tied with her backcourt partner senior point guard Onome Jemerigbe for third in the Big West with a 4.5 assists per game.

Often undersized when guarding in the backcourt, it is Toler’s quick hands and feet that have allowed her to be one of the team’s best on-ball defenders.

Toler’s 1.9 steals per game average during conference play ranks second in the Big West. In 17 of UCSB’s 21 games this season, Toler has had at least one steal. As of recently, she has been a consistent bother on defense with three steals in three of the team’s last four games.

Alongside Toler, Edelman and Porter are the team’s other two double figure scorers during conference play. Porter averages a team leading 13 PPG, while Edelman is at 10.8, respectively. Edelman leads the Big West in field goal percentage at 57.4 percent.

While UCSB will definitely need an improved first half start, opposite of its 17 points scored in its previous game, its on-ball pressure both inside the paint and along the perimeter will be most important in facing UC Davis.

UC Davis plays at a patient, yet efficient pace which is most evident by their offense. Most importantly, the Aggies are structured with each possession as they are second in the conference with the least amount of turnovers per game at a 14.0 average.

Nonetheless, their care with the ball translates to their scoring as they lead the Big West with 70.6 PPG. The focal point to UC Davis’ offensive success is redshirt sophomore forward Morgan Bertsch.

An All-Big West Second team and Big West All-Freshman team selection last season after being the program’s first freshman to lead the team in scoring since 1979-80 at 13.9 PPG, Bertsch is one of the league’s most productive frontcourt players.

She ranks second in PPG and fourth in field goal percentage in the Big West with averages of 16.1 and 51.5, respectively. Bertsch owns a team-leading six 20-point games this season.

The Aggies’ frontcourt star is a key factor in their conference leading 44.1 field goal percentage. Yet, also contributing is their 35.8 three-point percentage which also leads the Big West as well.

Providing UC Davis with a perimeter threat is junior forward Pele Gianotti. She averages 10.3 PPG and is one of the Aggies’ most lethal shooters, making 37.6 percent of her three-pointers, ranking eighth in the conference.

Despite Davis’ explosive offense, UCSB has the ability to keep up with the pace of the Aggies as the Gauchos are right behind them in both field goal percentage and three-point percentage at 41.3 and 35.1, respectively.

UCSB and UC Davis will tip-off this Saturday, Feb. 4 at 2 p.m. at the Thunderdome.