The Daily Nexus
Sign of the Times
Planned Parenthood and Respectability Politics
February 2, 2017 at 5:00 am by Laurel Rinehart 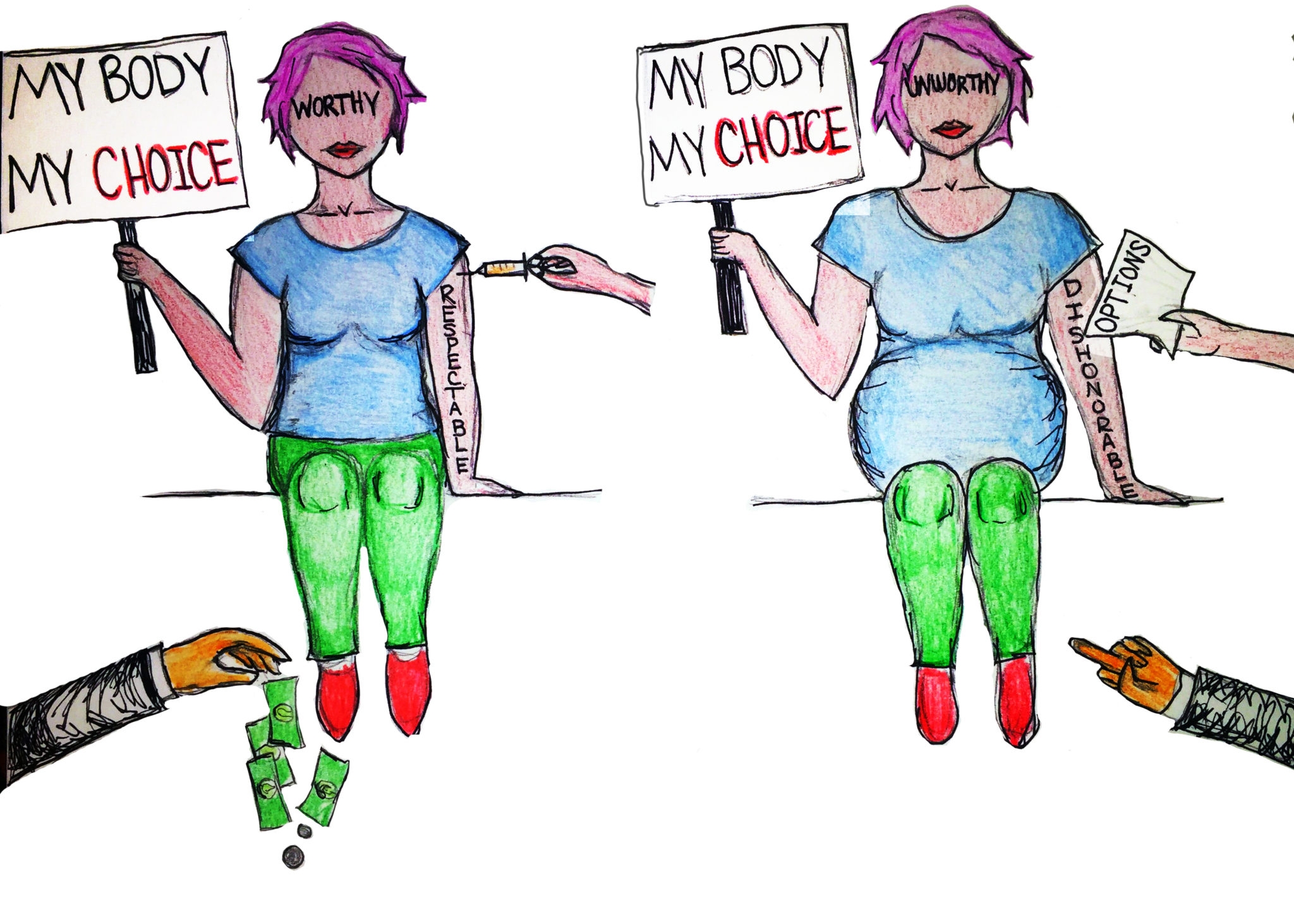 With Trump’s administration officially underway, many Americans are scrambling to figure out exactly what this new presidency means for them and the ways in which their everyday lives might be affected. American women are one of the many groups for which these concerns are especially grave. Trump has proposed restrictions on women’s reproductive health, ranging from restricting insurance coverage for contraceptives to banning abortion. Alarmingly, he has already begun working toward the latter by signing an executive order to defund International Planned Parenthood. Many women have employed efforts to defend their reproductive rights in the midst of this scare, taking actions ranging from posting on social media to writing their congressmen to marching in the streets.
I commend every woman who has made an effort to defend her reproductive rights — and, by extension, mine — through these various means of resistance. It is important to utilize our constitutionally protected right to free speech to take a stand for issues like this that deeply and tangibly affect women in our everyday lives.

I find myself disappointed, however, with the argument that many people have employed to advocate for the continued funding of Planned Parenthood. I have noticed a trend of tweets, statuses and shared articles trumpeting the many benefits that Planned Parenthood provides in addition to abortion. The objective of these posts is essentially to defend Planned Parenthood by reminding people that if it is defunded, these health services will also be defunded by extension. Don’t get me wrong, I think it’s wonderful that the clinics provide a wide range of affordable healthcare services. I’m grateful that I can walk into my local Planned Parenthood clinic and receive a flu vaccine or get a physical exam if I should need one. These services should absolutely continue to exist.

Access to safe abortions is necessary and important for women, and we should not have to list a string of other health benefits that clinics provide in order to justify their existence.

The issue I have is that many people highlight these benefits as the cornerstone of their argument for why Planned Parenthood should continue to receive funds. Every day I see posts on my feed that say something like, “Planned Parenthood isn’t just an abortion clinic! Keep them around so women can have access to (insert long list of health services here)!” I understand that women are desperate to protect their reproductive health and are trying to leverage any argument they can to keep the clinics running. But let me pose a question for people who utilize these arguments: What if Planned Parenthood was just an abortion clinic? Would they still be entitled to federal funding? To me, the answer is a strong, resounding “yes.”

Access to safe abortions is necessary and important for women, and we should not have to list a string of other health benefits that clinics provide in order to justify their existence. By now you might be shaking your head and wondering why the hell it matters what argument we use to defend our rights, so long as we fight for them in the first place. But I believe that people who use these arguments to justify Planned Parenthood are avoiding a head-on confrontation of the sexism underlying Trump’s proposed policies, electing instead to play the game of respectability politics.

Wikipedia defines respectability politics as, “Attempts by marginalized groups to police their own members and show their social values as being continuous, and compatible, with mainstream values rather than challenging the mainstream for what they see as its failure to accept difference.” Many social movements have seen their members succumb to respectability politics. Every movement begins as an effort to reconstruct a paradigm that endorses the mistreatment of a certain group of people. For example, the ongoing civil rights movement began as an attempt to reconstruct the paradigm that African Americans are an inherently inferior class of people and therefore not entitled to certain rights. Activists were trying to promote a new paradigm: that all humans have natural rights on the basis of their humanity and that race is an unjust qualifier in the distribution of these rights.

Respectability politics come into play when marginalized people begin to fear that the majority will never accept the new paradigm, and they settle by trying to find ways to obtain their rights under the existing oppressive one. Instead of rewriting the rules, they decide it would be more attainable to play the game and try to win. In keeping with the civil rights example, Booker T. Washington immediately comes to mind as a famous proponent of this behavior. Washington was an activist in the post-Civil War era who advocated for the advancement of African American people through education and entrepreneurship, essentially encouraging them to better themselves and earn their place in white society. Some would argue that Washington effectively improved the lives of African Americans by helping them become educated and economically independent.

However, his activism was rooted in a stance that failed to challenge the paradigm upon which racial disenfranchisement was based. He did not call for the dismantling of Jim Crow segregation or raise attention to black voter disenfranchisement in the South. By encouraging his followers to earn their place in society rather than demanding the restructuring of a flawed system, Washington implicitly confirmed the notion that equality was not a natural right, but should be afforded based on merit. He may have helped advance people of color, but he did so using a rhetoric that allowed the foundation of racial inequality to remain in place. He played the game of respectability politics, and as history would eventually prove, it would be an impossible game to win.

Where women’s reproductive rights are concerned, the paradigm in question is a dangerous one. It comes down to the question of whether or not women possess the right to bodily autonomy and what the role of others should be in making and enforcing decisions about women’s bodies. Lawmakers must determine whether or not women have the right to be free agents in determining how they dress, who they sleep with, the protection and contraception they use and what to do if that protection fails. The current legal framework established by Roe v. Wade and the Affordable Care Act supports the belief that women do have these rights. By allowing abortion and providing insurance coverage for contraceptives, respectively, these measures provide legal reinforcement for bodily autonomy. They confirm that sexual behavior and pregnancy are decisions that should be made by individual women; in other words, the government has no legal or moral standing to intervene in these private decisions.

The new paradigm that Trump will do everything in his power to implement involves a starkly different philosophy. All of Trump’s policies on women’s reproductive health would be based on the underlying premise that women’s bodies are within the government’s power to regulate, and that male legislators are qualified to make these decisions based on their personal values regarding the moral status of women’s sexual behavior. I want to pause and acknowledge that there are many factors at play in debating the moral and legal status of abortion. Religion, rights of the fetus, parental obligation and other considerations have been raised as defenses that obscure the sexism at the core of the pro-life platform. I don’t want to leave these arguments unrefuted, but I’m also not here to get into the specifics of why abortion should be legal. That case has already been eloquently presented by writers in the Nexus and other publications.

Planned Parenthood should not have to earn the respect of American voters by proving its usefulness in areas that white males deem more acceptable than abortion.

This article is addressing my fellow activists who already have a strong pro-choice conviction and wish to advocate for that belief in the most effective way possible. To me, that means understanding the messages you’re sending with the arguments you advance in favor of Planned Parenthood. Obviously, these activists want to maintain the pro-choice paradigm and the policies deriving from it. And many people will employ whatever rhetoric they think will work to convince fellow citizens and lawmakers that these are rights worth defending. Cue the tweets, long Facebook posts and shared articles with titles such as “Why we All Need Planned Parenthood” reminding us that Planned Parenthood offers a multitude of health services besides abortions. If we overturn Roe v. Wade, the argument goes, we would be getting rid of all these resources as well. Some articles even list off the services Planned Parenthood provides for men.

The problem with these arguments is that they unwittingly establish a moral continuum for health services and give validity to the notion that services such as flu vaccines or cholesterol screening are somehow a more legitimate use of taxpayer money than contraceptive services. Instead of confronting the issue of sexism at the core of this debate, this argument caters to it by affirming the claim that Planned Parenthood would not be worth funding if they did not supply additional services. Just like Booker T. Washington’s claim that education and economic success will raise African Americans to a level deserving of white society’s respect, this argument implies that Planned Parenthood’s wide array of medical services elevates it to a level of respectability that a stand-alone abortion clinic would not deserve.

Planned Parenthood should not have to earn the respect of American voters by proving its usefulness in areas that white males deem more acceptable than abortion. Affordable medical services are a huge plus, but they are in no way necessary to justify funding these clinics. Planned Parenthood is a necessity because they provide abortions, not in spite of them. My right to a safe abortion is not contingent upon the clinic’s ability to provide other medical benefits. I want to keep Planned Parenthood around just as much as the individuals writing these posts, but I refuse to play the game of respectability politics. It is imperative that women recognize this distinction and hold President Donald Trump accountable for the insidious sexism behind his policies.

The problem is, and perhaps the writer is unaware of this fact, but current federal law PROHIBITS federal funding for abortions. So, if Planned Parenthood “was just an abortion clinic,” they WOULD NOT be entitled to federal funding. Don’t get me wrong, I don’t agree with this state of affairs, but that’s the current legal situation, and that is in part why people argue that federal funding is necessary for PP because of the services it provides other than abortion. (Services other than abortion, but the way, are the vast majority of the services provided by Planned Parenthood.)

Agree with this opinion piece 100%.

Something additional to consider: bodily autonomy is not just a female issue.

Currently in the United States, it’s only males who are legally subject to being genitally mutilated (“circumcised”) without consent.

So you find uncircumcised penises attractive? If you don’t want a baby, don’t let someone blow a load in you? Why is that complicated? But hey – there are some dumb hoes out there for sure and abortions are not expensive. I don’t care if a dumb hoe wants to export an unwanted baby from her vagina. But why should taxpayers have to pay for this? How much does a goddam abortion cost? $500 at most? You want to abort – pay for it yourself. WTF?