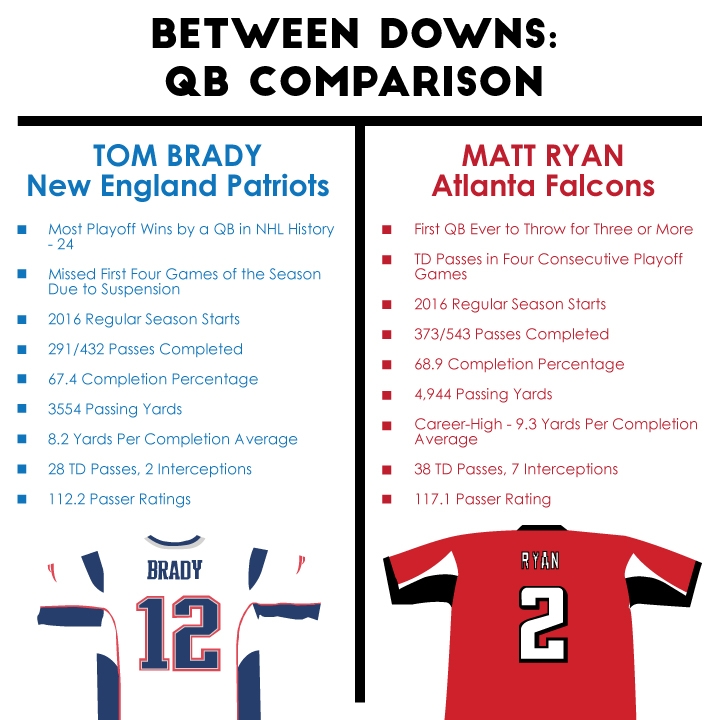 This isn’t Tom Brady’s first rodeo. Brady has previously taken the Patriots to a total of six separate Super Bowls. Having won four of them, New England fans are excited, as this future hall-of-fame quarterback will have a chance to grant the franchise its fifth championship. No other QB in NFL history has ever achieved this mark, so the experience advantage is definitely in his favor.

Coming off his four-game ban at the beginning of the season, Brady’s still managed a record-breaking touchdown to interception ratio. A major key to his team’s success will reside on the backfield’s ability to run after catch on short plays.

Also, considering he’s missing the best tight-end in the league, Gronkowski, Brady has proven time and time again that he’ll get the job done no matter what. He’s looked as stellar as ever throughout the postseason thus far, and with questions of retirement in the air, one thing is for sure: Brady’s going out with a bang.

Matt Ryan has become the franchise quarterback that Falcons fans have been searching for since Mike Vick. Statistically speaking, Ryan has been ranked top three in almost every QB category this season and has been prepping his game all season long.

Ryan led the Falcons to break the franchise scoring record during the season. Alongside a very talented backfield, Ryan has found much success on screen plays and the safety valve options his running backs offer, not to mention a receiving corps that has proven to be one of the most potent in the league. With a 117.1 passer rating, on paper, he’s been more productive than his opponent counterpart.

To make matters worse for future defensive matchups, Ryan is merely 31 years old and is hitting his peak at the perfect time. With two great passing QBs waiting to start in this upcoming Super Bowl, viewers are sure to be in for quite the show.