The Isla Vista Recreation & Park District (IVRPD) is raising funds to replace the educational signs near the vernal pools of Isla Vista as well as other ecological preservations and historical sites in the community. 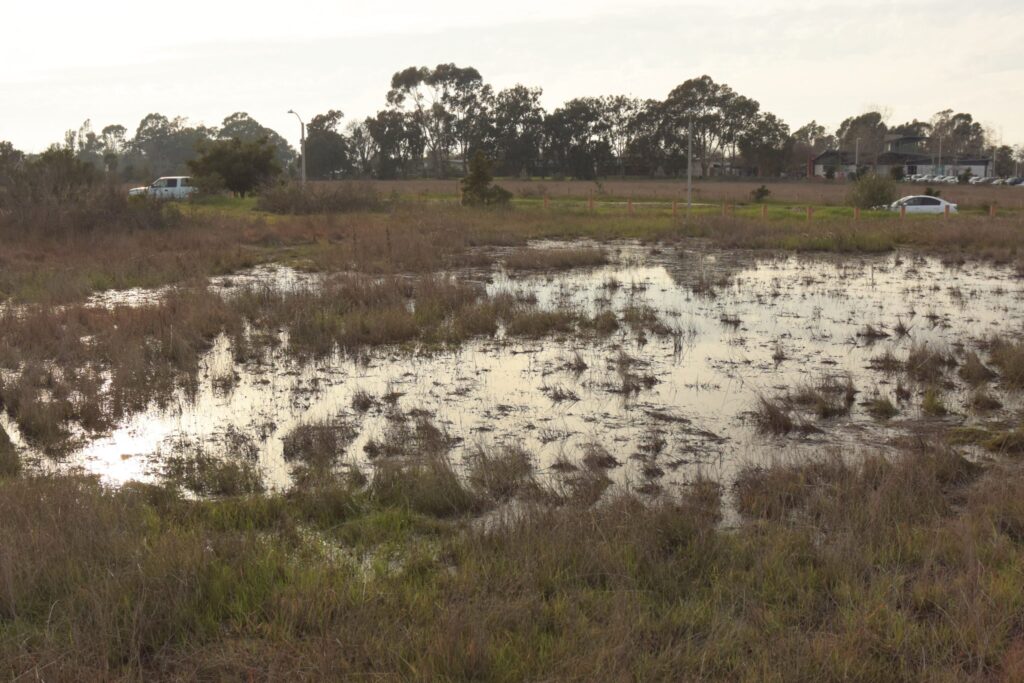 Before urban development increased in the last five decades, vernal pools were common in southern Isla Vista. The informational signs near the now-rare pools have deteriorated since their installation in 1986. Min Xie / Daily Nexus

Vernal pools are shallow depressions in the ground that can contain entire ecosystems. They thrive in climates that are typically dry in the summer and rainy in the winter, making I.V. an ideal breeding ground for ecological diversity.

The Del Sol Vernal Pool Reserve, owned by IVRPD, is located at the southeastern corner of El Colegio Road and Camino Corto near Isla Vista Elementary School. Although vernal pools appear in other spots throughout I.V., this spot harbors the largest portion of vernal pools.

Before urbanization in the 1960s, vernal pools were very common in the southern half of Isla Vista. Many of these pools no longer exist, but the recent rainy season has once again flooded the existing pools, reviving their ecological activity. They serve as an essential habitat for a variety of plant species and aquatic animals that would not survive anywhere else.

When the vernal pools were restored in 1986, there was a series of about 12 informational signs that explained what vernal pools are and how many of the pools have been lost due to development in the area. Signs also included information about I.V.’s restoration process, the history of Chumash who once settled the land and descriptions of local wildlife.

The majority of these signs have largely deteriorated or been removed over the years, according to IVRPD General Manager Rodney Gould, and the district hopes to restore them. The project is still in its early phases, and IVRPD is pursuing a grant from the Associated Students Coastal Fund.

IVRPD board member Daniel Torres said the restoration of these signs will encourage future Isla Vista residents to preserve the vernal pools.

Despite being nearly two square miles in size, I.V. contains over 25 parks, many of them centered around historical landmarks as well as natural ecosystems and habitats. Some of the most frequently visited areas of I.V. — the Camino Corto open space, the Del Playa open space and Gaffney Park — contain at least one vernal pool.

Torres said there is a need for “longstanding monuments for what exists in Isla Vista” so that the community can understand the importance of local ecosystems. He said the signs would provide invaluable information about I.V.’s history and unique natural environment for elementary school students and university attendees alike.

“Isla Vista is not just a place where people party all the time,” Torres said. “When people are walking through Isla Vista and pass the vernal pools, they get a feeling for what Isla Vista really is.”

A version of this story appeared on p. 3 of the Thursday, February 2, 2017 print edition of the Daily Nexus.