The Daily Nexus
Volleyball
Men’s Volleyball Drops Second-Straight to Bruins
January 30, 2017 at 5:00 am by Spencer Ault

There was little to no separation between the UCSB and UCLA men’s volleyball teams for the first two sets of their match on Friday night. However, UCSB was unable to prevent itself from being swept by the Bruins. 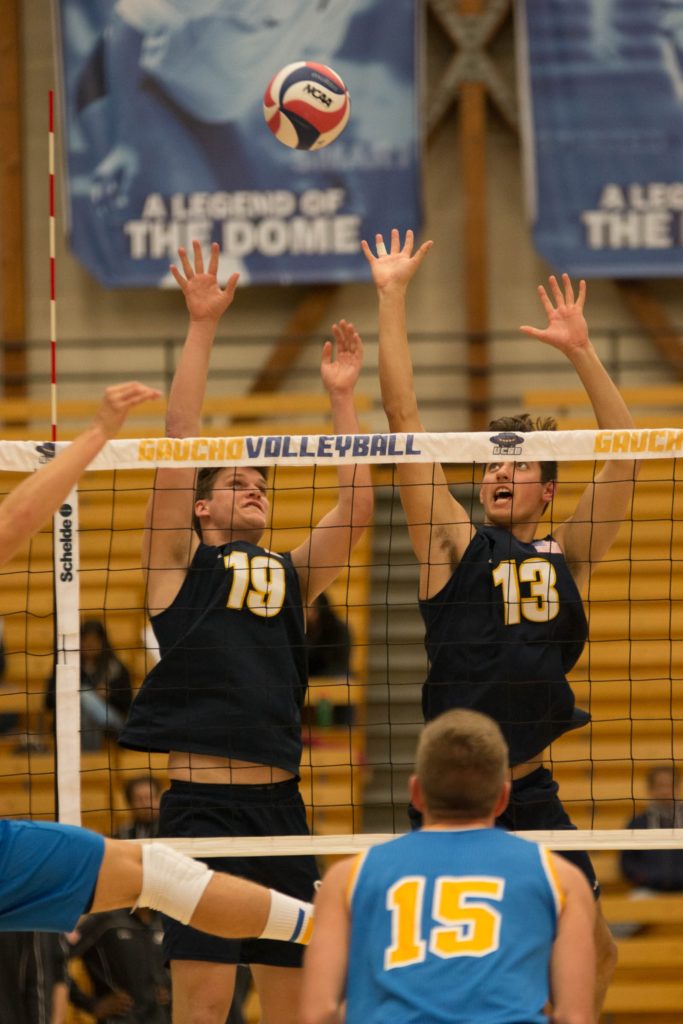 With regard to the first two sets, the lead bounced around, never exceeding four points in either direction as both sets went right down to the wire.

In both of those sets, however, it was the Bruins that managed to hit the 25-point mark first. That, combined with a more commanding UCLA performance in the third set gave the visitors a 3-0 sweep over the Gauchos. It was the Bruins second consecutive sweep of UCSB.

Friday’s 3-0 sweep did show signs of improvement compared to Wednesday’s 3-0 sweep, as rough a sight for Gaucho eyes as those results are.

On Wednesday, in Westwood, UCSB fell behind early in sets one and three, allowing UCLA to coast to two easy set victories.

The second set was a closer match to Friday’s first two sets, as the Gauchos kept it close throughout and even led 14-11 at one point. Ultimately, however, that similarity extended to the result of the set, which the Bruins, now 8-1 overall and 6-0 in league, won 25-20 thanks to a four point run to close it out.

Star outside hitter Jacob Delson was the only Gaucho on Wednesday to break double digits in kills with 13, while setter Casey McGarry put up 21 assists on the night. UCLA also only had one player in double digit kills – Jake Arnitz with 10 – but that was more a reflection of the Bruins’ well-roundedness than it was of any offensive struggles.

On Friday, things were much the same for the Gauchos statistically. Delson just barely cracked the double-digit mark with 11 kills, and Corey Cheevers finished close behind with eight. The assists were different, as it was freshman setter Randy DeWeese who led the team with 26.

It seemed initially that UCSB might have learned from their Westwood thrashing on Wednesday. The Gauchos led early and held that lead into the middle of the first set, stretching their advantage to a comfortable 17-13 spread at one point.

UCLA responded to that challenge just like the second-ranked team in the nation should, ripping off a 12-5 run to take the lead and close out the set.

A Keenan Sanders kill opened up the second set, and put the Gauchos up, but that was the only lead UCSB would hold in the second act. The two teams battled back and forth throughout the entire set, with UCLA’s 13-9 lead being the largest differential for either team. In the end, the Gauchos were unable to turn the tide back against the Bruins, who racked up two straight kills to squeak out a 25-22 win.

Coming on the heels of the back-and-forth, tensely fought first two sets, the third set was a bit of a snoozefest. UCLA flew out of the gate with a four-point run to start and went up 7-1 in short order.

The Gauchos clawed back into contention with a four-point run of their own to make it 7-5, but by the middle of the set the Bruins had things firmly under control.

UCSB has a week off until its next game against Hawaii in Honolulu. The match is scheduled to take place at 9 p.m.