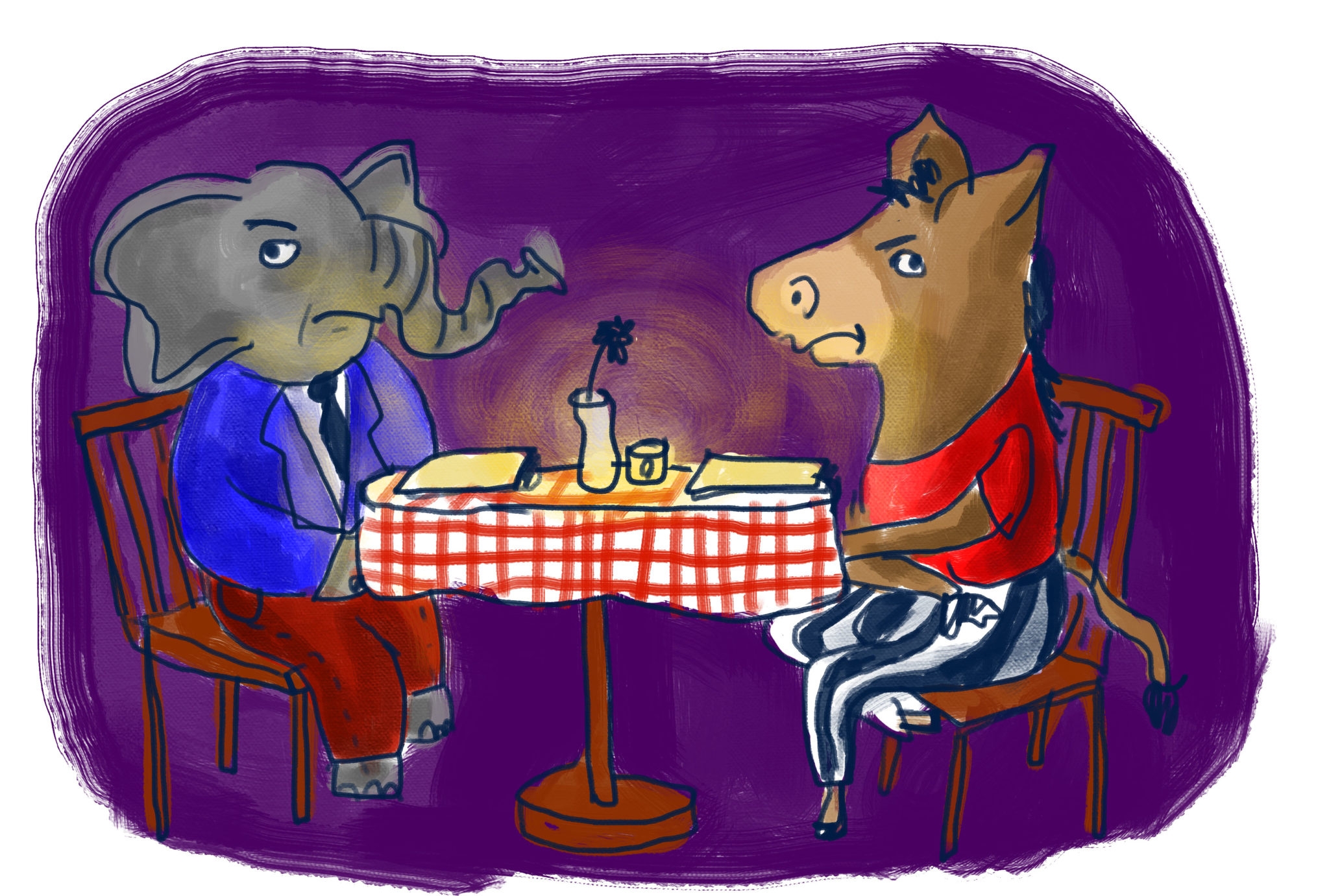 Over winter break, I made a trip back home to Dallas and got the chance to catch up with some friends from high school. It was my first time going back since the election, so I was hesitant yet curious to hear how some of them felt about our country’s current state. One night over drinks, one of my good girlfriends and I were venting about our disappointment, shock and repulsion over the election results. After relieving our political frustration, we switched topics to her new boyfriend that she is absolutely smitten over. I was feeling so much joy for her as she endlessly listed his positive qualities and kind gestures when she suddenly mentioned that he was a very active supporter of Trump.

I sat there, puzzled, as I tried to process this information. After everything we had just discussed, how is it possible that she could be so into someone who views life in such a different light? How could she be so invested in a relationship with someone who could have such different beliefs and values? Of course, I believe that coexistence and amiability is possible amongst those of differing political viewpoints, but love? Sex? Marriage? I mean, let’s be honest: This election was not typical. It was full of extremes, and a lot of extremes that affect women, specifically. For most people, this election wasn’t just a matter of being fiscally conservative or wanting lower taxes. Casting a vote for Donald Trump meant a lot more than that.

I believe that coexistence and amiability is possible amongst those of differing political viewpoints, but love? Sex? Marriage?

We are living in a time of intense opposition and frustration. Ultimately, I truly do believe that all of this will lead to positive change, but right now people have to speak out. They have to be honest about what they feel and believe. Regardless of which end of the spectrum you fall on, the issues that are currently on the table are far too big to be brushed under the rug. Trying to start a relationship with someone who you can’t discuss these intense topics with isn’t going to lead to any sort of steady foundation.

People often say that opposites attract. But really, how accurate is that? Sure, we like people that are different. Sometimes it’s nice and necessary to have others balance us out and open our eyes to differing thoughts and views. But when it comes to our core values, they can’t be too far off. Having such fundamental differences is extremely difficult to get past and will most likely result in someone changing or caving in order to make the relationship work. Having a real relationship with someone means that you plan on growing with them. It means that you plan on becoming better as individuals together. I don’t see how that can be possible between two people who have completely different ideas about what constitutes growth and improvement.

One of the most prominent topics being debated at the moment is that of a woman’s right to have control over her body and health care. Call me crazy, but it seems pretty absurd to be sleeping with someone who holds the opposite view of you on an issue as heavy as this. In my opinion, regardless of whether you are pro-life or pro-choice, the person that you are having sex with must share the same opinion. It doesn’t matter if it’s a casual hookup or a serious, long-term relationship.

All in all, having sex can lead to consequences, one of them being unwanted pregnancy. Even when you’re careful and responsible, accidents can happen. If it does, it’s pertinent that both parties be at least somewhat on the same page. While I personally believe that the ultimate choice is that of the females, knowing where your partner stands on the issue can save a lot grief and pain.

In my opinion, regardless of whether you are pro-life or pro-choice, the person that you are having sex with must share the same opinion.

If you are woman who is pro-life, and could never bring yourself to make the decision to terminate a pregnancy, then the guy that you’re sleeping with should share the same mindset. If you are a woman who believes that she has the option to do what she pleases with her body, then you probably shouldn’t be sleeping with someone who voted against you having that choice. How can you be comfortable sharing your body with someone who doesn’t believe in the rights that you have to it? It’s a dynamic that is far too complicated and serious to risk.

While it is true that people can change one another and open our minds to new ways of thought and belief, trying to force change upon the person you desire isn’t going to result in happiness for either of you. Having a relationship that thrives, challenges and inspires you requires that your fundamental values and beliefs be in alignment. Being able to connect on not only a physical and emotional level, but also on one of intellect will, without a doubt, result in the strongest and most rewarding of bonds. So don’t let yourself settle. Don’t allow yourself to be with someone who makes you feel inferior. We are facing tumultuous times that will be made much easier with the support and affirmation of those we hold closest.

Allie Lebos hopes you and yours are on the same page politically.

Nice article! You did a great job getting your point across without condemning one side of the political spectrum. We need more level-headed ness right now