The Daily Nexus
Tennis
Gauchos Drop First Match of the Year Versus No. 7 UCLA
January 23, 2017 at 5:00 am by Richard Benites 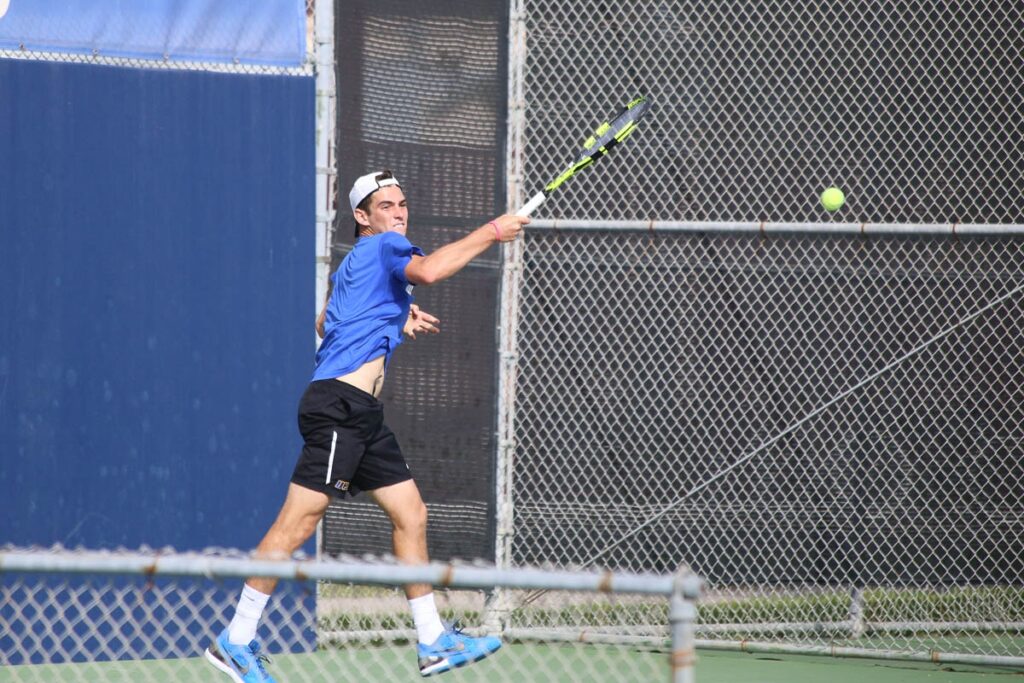 Last weekend, the UCSB men’s tennis team visited UCLA for a non-conference exhibition meet. The Gauchos were hot off a 2-0 start to the season, meanwhile, the nationally ranked No. 7 Bruins were also undefeated with a 1-0 record on the year.

The event was an entertaining one as both sides fought for court dominance. UCSB found an early lead through their success during the doubles portion of the competition. UCLA then went on to almost sweep through the rest of the meet during the singles portion.

Upon the completion of Saturday’s meet, UCLA managed to hand Santa Barbara its first loss of the regular season by a final tally of 5-2.

This puts the Bruins at an undefeated 2-0 at the start of their 2017 campaign, whilst UCSB drops to 2-1. The Gauchos still remain first in the Men’s Big West standings, as they hold a one conference win lead over second place rivals Cal Poly.

The Sunset Canyon Recreational Center, in Los Angeles, was the venue for plenty of sets for elite collegiate tennis. The event started with the Gauchos claiming the first victory of the day, with Simon Freund and Morgan Mays.

This doubles sensation was recently highlighted for their national recognition and the recent string of consecutive successes in season/tournament play. They claimed a 6-3 win over their Bruin opponents of Martin Redlicki and Evan Zhu.

Redlicki previously won the 2016 NCAA doubles final alongside teammate Mackenzie McDonald. So the learning curve Redlicki is still adjusting to alongside his new doubles partner, Zhu, can be observed.

The following match was the second, of three, doubles with the final result ending in a 7-5 advantage once again in favor of UCSB. The Gauchos’ sophomore talents of Anders Holm and Nicolas Moreno de Alboran bested the Bruins, Joseph Di Giulio and Austin Rapp, for the second decision of the meet.

Singles matches commenced with Austin Rapp, of UCLA, defeating Holm in two sets at scores of 6-1 and 6-3

Di Giulio maintained his school’s momentum as the Bruins went on to take the following singles match, against Gaucho junior Chase Masciorini, with 6-2 and 6-3 victories.

Freund went on to claim UCSB’s only singles victory after playing Zhu, with final scores of 6-4 and 7-5.

The first three-set match came when Gage Brymer held off Alboran for the win after dropping the first score at 3-6, but then recuperated with 6-1 and 6-2 finishes.

Redlicki and Mays really put on a show as the two highly esteemed athletes recorded yet another three-set match. Redlicki started with a comfortable 6-1 win, but Mays fought back in the second set at 5-7. Eventually, the tie-breaker went in favor of UCLA as Redlicki completed the win with a final 6-4 score.

The final doubles match of the day ended at an ‘unfinished’ 5-5, which concluded the day’s meet altogether as UCLA beat UCSB at an overall match record of 5-2.

The men’s tennis regular season returns next month, on the 11th of February, where UCSB will travel away to Stockton, CA for another non-conference meet against the University of the Pacific.