The Daily Nexus
News
Students March Through Rains Against Inauguration of 45th President
January 20, 2017 at 4:14 pm by Josie Baez and Tamari Dzotsenidze 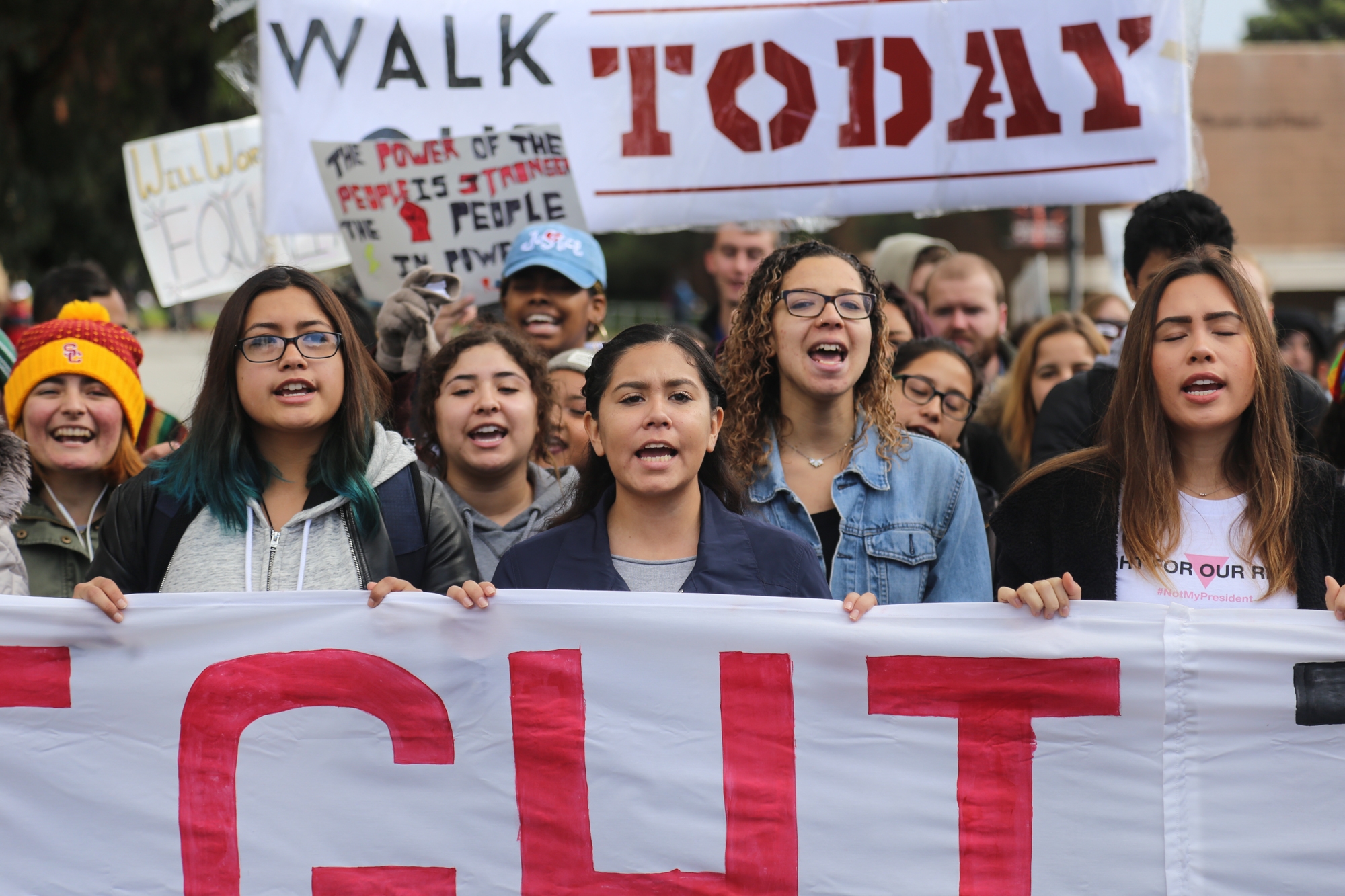 Students chant “The people united will never be divided” as they march down the streets of Isla Vista. Jenny Luo / Daily Nexus

Despite the heavy rains this morning, an estimated 500 students grabbed umbrellas and walked out of their classes at noon in protest of Donald Trump’s inauguration as the 45th President of the United States. They gathered in front of Campbell Hall holding signs saying “Make America Gay Again” and “Jail Bankers, not Immigrants.” 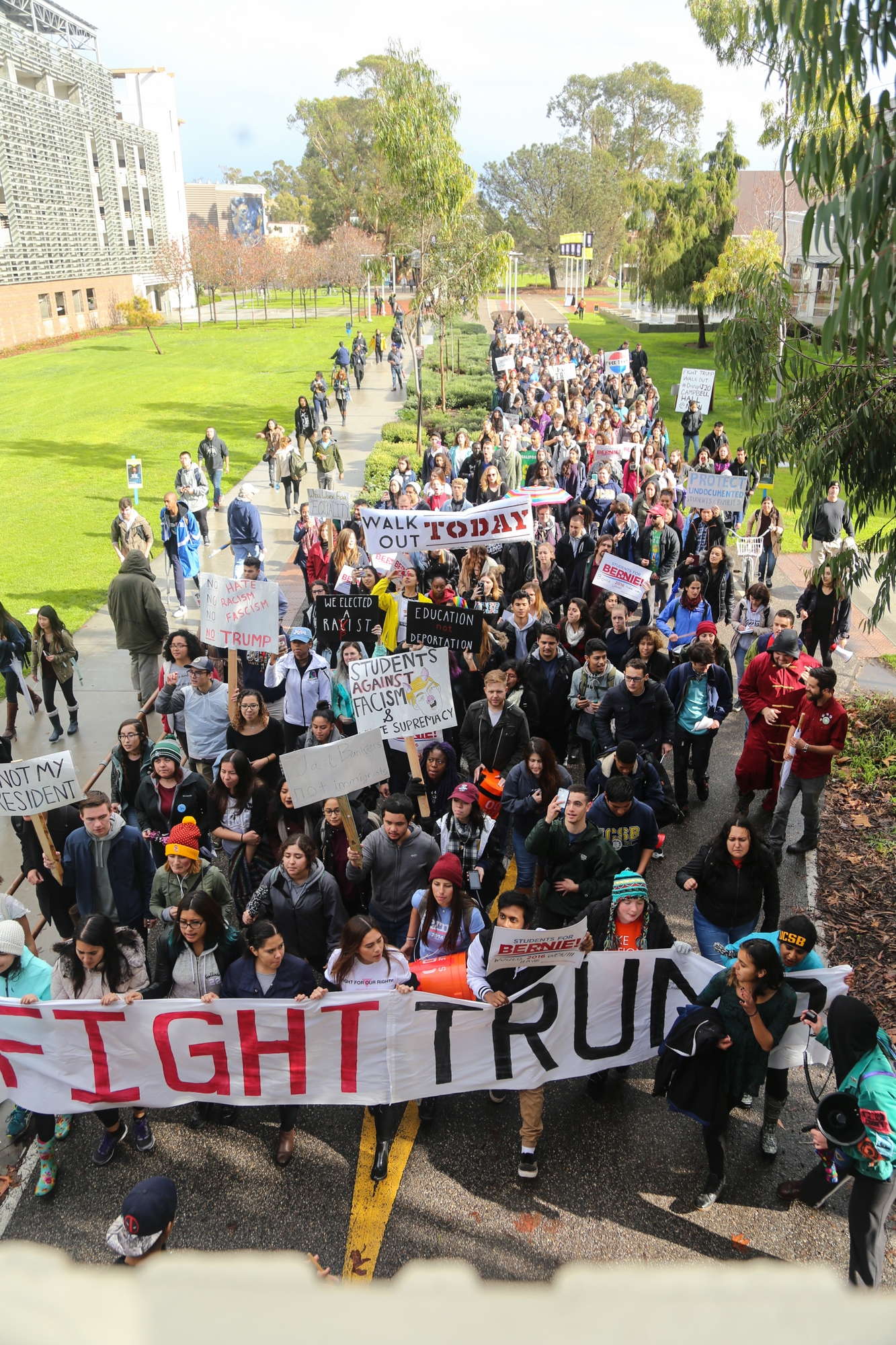 The protest, organized by the Student Activist Network, marched from Campbell Hall through the UCSB Library before making a stop at Storke Tower, after which they marched down Pardall Road to Anisq’Oyo park.

Candice Somay, a PODER organizer, made an impassioned speech to the gatherers, which included UCSB alumni, students, faculty and a handful of dissenters rallying against the protest.

Rogelio Vargas Gonzalez, student outreach liaison for UCSB’s Multicultural Center, spoke at Storke Tower reassuring marchers that “You are here now to continue fighting for what is right and just.”

“We’ve noticed there are some counter-protesters here so the reason for being here is to kind of show our presence and make sure that everything is peaceful and that everyone is able to express their feelings,” he said.

The counter-protesters were not all Republicans or Trump supporters. Troy Eggertsen, a prominent anti-protest protestor, personally identifies as Libertarian.

Faculty present at the walkout included Aaron Jones, assistant director of Community Affairs,  who shouted “Her body, her choice” alongside protesters at Storke Tower. Jones said protests are effective in showing people that they are not alone. 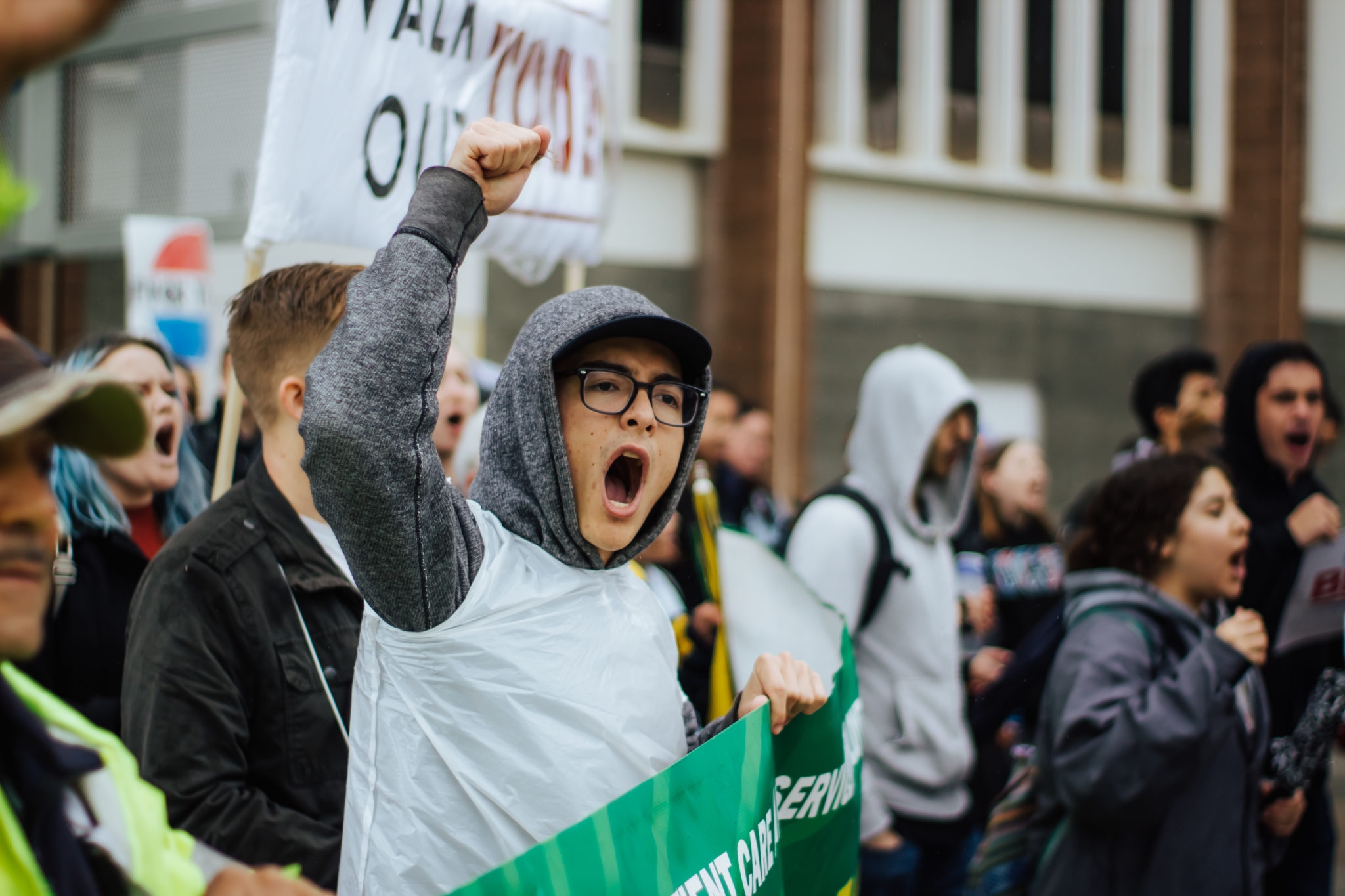 Woodrow David, a first-year student, chants along with protesters against the inauguration of President Donald Trump. Nathan Mai / Daily Nexus

“I also equally think it’s important for individuals to really take care of self and really work on our own evolution, our own growth, and so I do think it has an effect,” he said.

Lisa Sun-Hee Park, a professor of Asian American Studies, spoke with candor about Trump’s inauguration. “Apparently we now have an absurd orange troll as our President,” Park said.

“This isn’t the first time and it won’t be the last time that our rights are tested and our resolve is tested,” she said.

Women chant “My body, my choice,” as men chant “Her body, her choice” during @POTUS Inauguration walkout at @ucsantabarbara pic.twitter.com/vXlDrSjkai

While students chanted, UCSB alumni and employees gathered along the edges of the crowd. Elizabeth Robinson and Sharon Hoshida, retired UCSB employees happily watched the students. 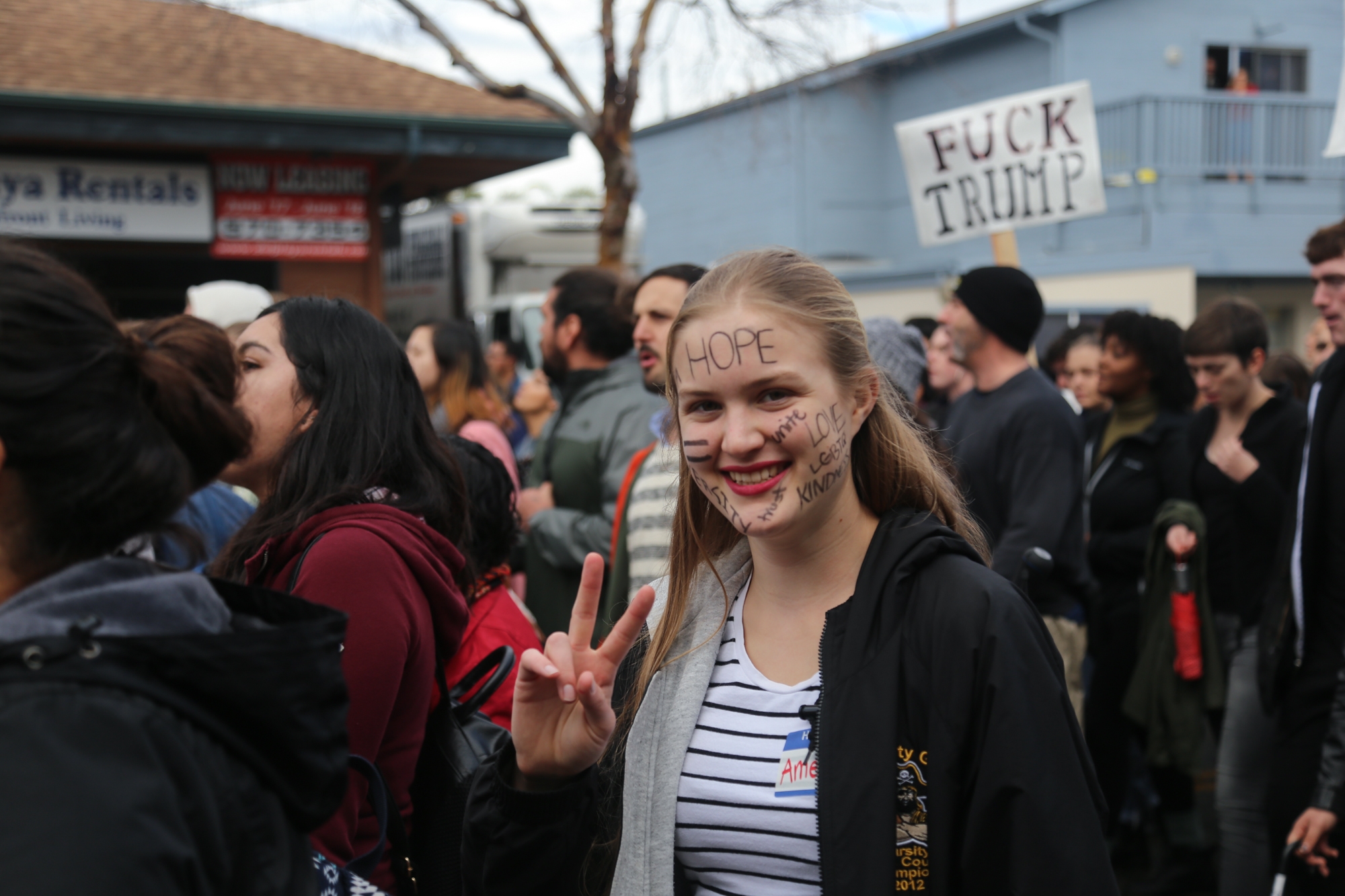 Bronwyn Bunnell, a first-year English major, had her face painted and held a sign that said, “My mom’s third-graders asked if there were going to be deported.” Jenny Luo / Daily Nexus

Margaret Klawunn, vice chancellor of Student Affairs, said students followed University regulations during the walkout. Although students marched into the library, disturbing University operations, she said they followed a request to walk through the building quickly.

“I think it is really important for students to feel like they have the power to represent the issues that they care about,” she said.

Students also blocked traffic while walking through Pardall Road, but businesses were not disturbed by the students.

“We experienced disruption from the rain but not the protesters,” Mehrdad Homayouni, owner of Sam’s To Go sandwich shop, said.

If these political protests do not evolve into something more productive then yelling “Fuck Trump” in a library, subsequently interrupting students that are studying, then he will win in 2020 as well.

He very well may.

But, he is a symptom, not the cancer (though he is malignant). He is aA symptom of the moral and intellectual decay (thanks to business “interests”, the entertainment culture, greed [political and corporate], etc., etc. etc.]) into which the American Empire has fallen.

And like most Empires of the past, it will be sucked away from within by the sewer it has carved out of what once was stable moral and intellectual ground (well, relatively speaking).

it was barely raining at noon ya’ll are weak

Just simply (and I do mean “simply”!) brilliant.

I am sure 500 people suddenly materialized in full marching order precisely at 12 noon. Or were the 500 crammed into the lobbies of the UCEN?

lmao, like they had control over the weather at that time.

“Margaret Klawunn, vice chancellor of Student Affairs, said students followed University regulations during the walkout. Although students marched into the library, disturbing University operations, she said they followed a request to walk through the building quickly.” I wonder if UCSB would tolerate a group of College Republicans marching through the library, chanting and disturbing students who were trying to study, if they just “left quickly.” I didn’t know that disturbing university operations was okay as long as you do it quickly. Would any other Student Conduct Code violation be ignored as long as it was done “quickly”? As I remember… Read more »

Oddly, I didn’t notice any of my fellow engineering students yelling in the library.