The Daily Nexus
Sports
Gauchos Lose a Close One at LBSU
January 20, 2017 at 5:10 am by Quinn Moslander

Dampening the joy of defeating Cal Poly, the UCSB Men’s Basketball team lost their fourth conference game last night to the Long Beach State 49ers. This loss puts the 49ers at 7-13 overall with a 2-2 conference score, leaving the Gauchos at 3-13 for the season and 1-3 in conference games.

With a close final score of 81-76, neither team was able to pull away with a lead larger than 13 points which only lasted 26 seconds long. It was projected to be a close fight and as expected LBSU and UCSB was an exciting game. 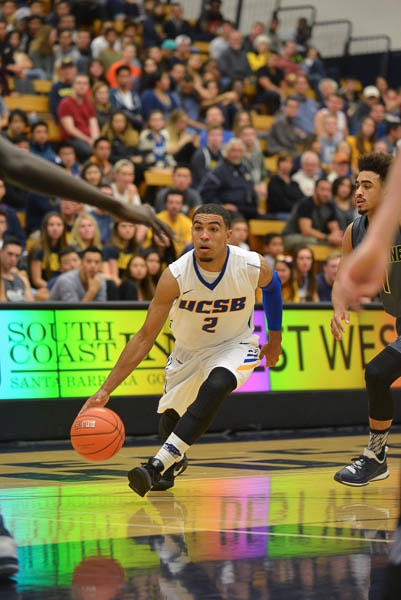 Long Beach sophomore forward Temidayo Yussuf started off the scoring in the first 22 seconds, but UCSB freshman guard Clifton Powell Jr. quickly responded with a jumper, tying up the score. The Gauchos proceeded to bring in another uninterrupted five points thanks to junior guard Gabe Vincent before the 49ers scored again.

UCSB was able to stay a few points ahead of Long Beach until the 15th minute. The two teams traded buckets until 9:39 when 49er freshman guard Loren Jackson made the three-pointer that started the Long Beach lead.

As the half went on, the scoring slowed down as both teams struggled to find a solid squad on the court, moving many players on and off the bench. The last 1:12 of the first half solidified Long Beach’s lead as they increased their score by six points, four of which being completed foul shots by junior forward Roschon Prince. UCSB junior guard Tide Osifeso managed to land a three-pointer with two seconds left, finishing off the first half being 37-47.

The 49ers had kept a small but steady lead during the latter part of the half but where they managed to outplay the Gauchos was in the details of the game. Although the two were tied in team rebounds, the Long Beach players managed to use more assists, make more blocks, and collectively have three less turnovers than UCSB, resulting in their 10-point lead.

Ending the first half, the top three scorers in the game all belonged to LBSU. Yussuf lead the board with 12 points, followed closely by junior guard Evan Payne with 10, and sophomore guard Noah Blackwell with eight.

Going into the second half, the Gauchos certainly had their work cut out for them. UCSB came into the period looking strong, scoring six points in under a minute at 16:52, but the 49ers were not about to let the score get too close, working back up to a nine-point lead.

From the 15th minute to 11:45 left in the game, only two baskets were made: a free throw from UCSB junior forward Alex Hart and a three-pointer from Osifeso. This period of time was otherwise characterized by numerous missed shots on both sides of the court as well as a couple fouls from either team as the players began to fatigue.

The scoring became significantly less frequent in the last 10 minutes of the game. While Yussuf and a handful of other 49ers traded off scoring, senior guard Eric Childress single-handedly powered through for the Gauchos. Childress scored 11 points, nine of which were uninterrupted by any of his teammates, as the clock ran down.

At 3:45 the Gauchos caught up to the 49ers off a layup from Childress, putting the score at 70-70. Unfortunately, UCSB did not have quite enough steam to take a lead despite the valiant efforts of Hart, who grabbed four boards and made two jump-shots in the last few moments.

Although it was not reflected in the final score, the Gauchos managed to outscore the 49ers in the second half 39 points to 34. Both teams worked hard and by the end of the game had totaled a similar number of rebounds, assists, and turnovers.

Losing only by five points, it was a close and well-fought match-up, but the 49ers consistently made more baskets making 46.4 percent of their shots while the Gauchos were only successful on 39.3 percent of theirs taken.

Although LBSU would have been a definite step forward, the Gauchos have a chance to redeem themselves Saturday night when they play UC Riverside who is 4-11 overall despite their two-game winning streak.