Daniel Reed’s research on the effect of low nutrients and high temperature on kelp is part of the Santa Barbara Coastal Long Term Ecological Research, where its objective is to determine the importance of land and ocean processes in structuring giant kelp forest ecosystems for different conditions of land use, climate and ocean influences.

Between 2014 and 2015, a phenomenon took place off the Santa Barbara coastline when ocean water temperatures rose to unprecedented levels in recorded history. Daniel Reed, deputy director of the Marine Science Institute at UC Santa Barbara, recently published his research on the effect of warmer temperatures and low nutrients on kelp.

According to Reed, kelp is considered a “sentinel” species — an organism that is used to detect risks to an ecosystem and has been designated to be a sentinel species to climate change. Since kelp thrives in cool, nutrient rich water in shallow shores, it is vulnerable to warming conditions in the ocean.

It has been predicted that if kelp beds were to collapse, associated communities would collapse as well since kelp plays an important role in both marine and beach ecosystems.

“Kelp is a foundation species; other species depend on it for food and for structure. It is a primary producer and produces a lot of food for other organisms,” Reed said. “Beaches where kelp accumulates tend to get many more small invertebrates, shorebirds tend to feed there. Beach systems are highly dependent on kelp being delivered to it. It is not just the organisms that live in the kelp.”

Tom Bell, an oceanographic scientist and one of the co-authors of the paper, said the high temperature warming began when a high pressure system proceeded to heat up an area of ocean in the North Pacific in 2014 that was then pushed toward the North American coast.

This large area of warmed water was nicknamed the “blob” by Reed’s team. One year later, in 2015, this area was affected by an El Niño, which is when warm water originating in the western Pacific Ocean is shifted eastward toward the South American coast.

“Imagine a deep ball of water, called a blob, extending from Alaska to Baja California being pushed across the coast of the United States and Mexico. This created an anomalous event that created high temperature, low nutrient water for an extended period of time,” Bell said. “So you have warm water from the north and from the blob and the next year warm water comes from the south, from El Niño.”

This resulted in high temperatures along the Santa Barbara coastlines for nearly two years and, subsequently, low amounts of nutrients such as nitrogen that kelp need to thrive. Reed and his team thus predicted a steep decline in kelp population due to these unprecedented conditions, but their research showed that the kelp did not react as strongly as they had estimated. 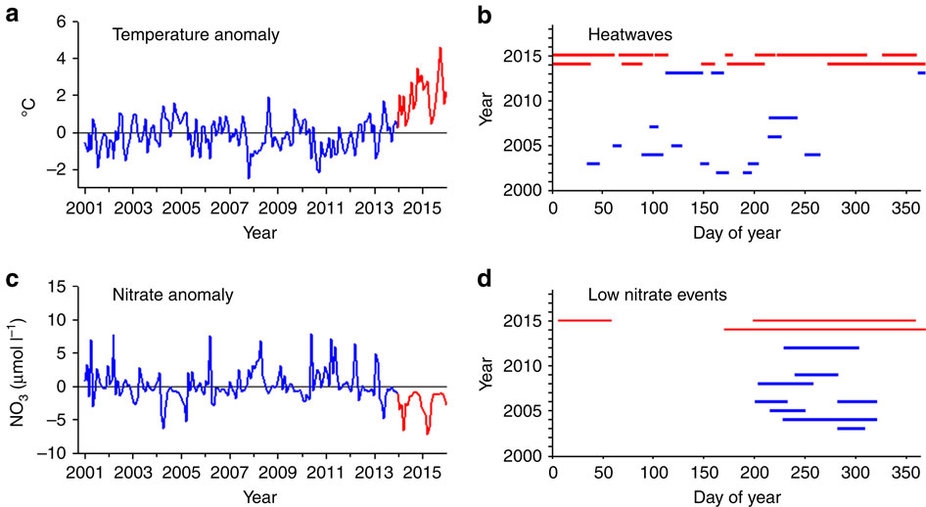 Above are different graphs that display the various anomalies Reed’s research team found in ocean temperature and nitrate levels in the Santa Barbara Channel. The anomalously warm years are shown in red.

“The temperature anomalies were greater than anything recorded to date. We’ve just not seen these types of temperature records before,” Reed said. “The kelp didn’t react to the extent that we thought it would to this temperature event, given kelp needs nutrients. The period of low nutrients was so extended that we didn’t think it would survive an event like this. It declined, but not any worse than we’ve seen in non-warm years.”

Reed said this outcome has changed their understanding and knowledge of kelp and that they will begin to research kelp resistance to high temperature and low nutrient conditions.

“It suggests to us that there are other forms of nitrogen out there it must rely on,” Reed said. “Our research is really starting to look at what allows kelp to survive some of these prolonged conditions.”

According to Bell, this research may indicate that the kelp declines during previous El Niño years may have been from the large storms present that tear up the kelp.

“In 2015, during El Niño, we had warm, nutrient poor water, but we did not have large storms. As people were expecting them, it didn’t happen,” Bell said. “The kelp didn’t decline as much, and we’re thinking maybe in the past El Niños it had more to do with the waves than the warm water.”

According to Reed, local deep sea divers collect data on kelp biomass monthly from nine plots along the coast. This data was then combined with data taken from Landsat satellites — satellites equipped with sensors to respond to reflected sunlight and infrared radiation from the Earth to capture high resolution images of the Earth — to determine the average biomass of kelp off the Santa Barbara Coast.

“We’ve done some data comparing the reflectance signal in the satellites to what we actually measure so we can estimate the average biomass across the region. We also have data in our fixed plots; these are divers that go out and measure things,” Reed said. “We wanted to see if our nine study sites were characteristic of the entire Santa Barbara channel. We measure kelp locally with divers and regionally with satellites.”

While this anomalous event is consistent with other extreme weather phenomena linked with climate change, there is little long term data to support the claim since the technology used to track long term disturbances has only recently been available to scientists.

“The science community has not had the types of instrumentation to do the kinds of measurements we can now do for a long period of time. The extreme winters or the drought we’re having, people tend to link extreme conditions to global warming,” Reed said. “It’s kind of unprecedented. It’s certainly consistent to what people would predict is an indicator of global warming, and these events will become more frequent in the future.”

Along with Bell, other co-authors include Libe Washburn, Andrew Rassweiler, Robert Miller and Shannon Harrer. The research paper, “Extreme Warming Challenges Sentinel Status of Kelp Forests as Indicators of Climate Change,” can be found on nature.com.