The Daily Nexus
News
Despite Calif. Rains, SB Sees No Drought Relief
January 19, 2017 at 5:00 am by Tamari Dzotsenidze

Lake Cachuma, now filled to only 9.2 percent capacity, is unlikely to see significant changes in its water level 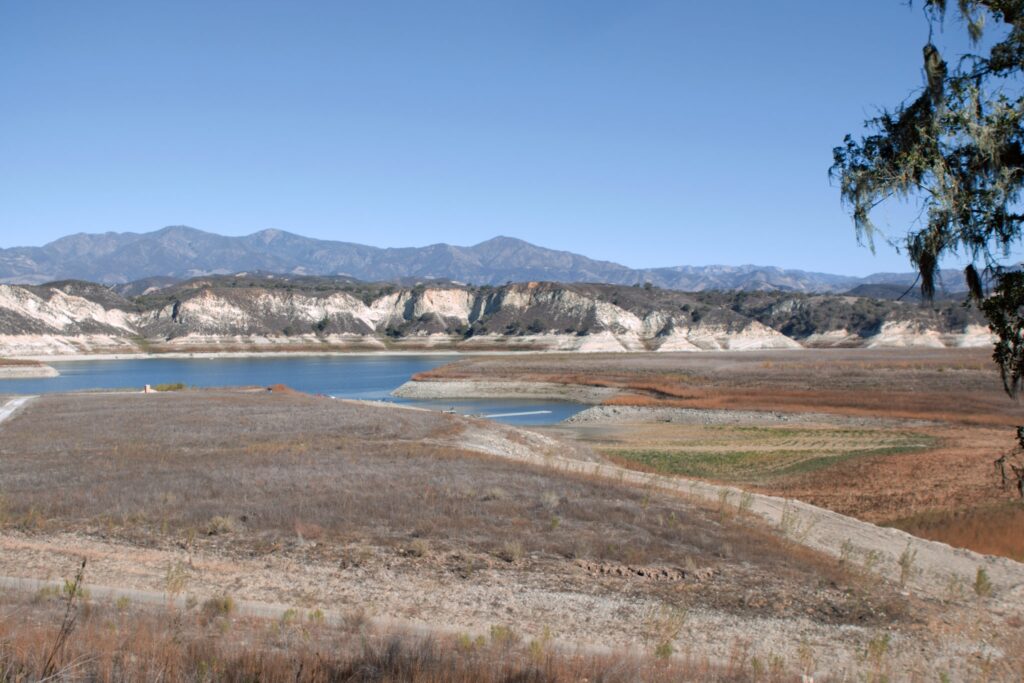 Although California has benefited significantly from the recent wave of storms, Santa Barbara is unlikely to reap the same benefits. A series of sustained rains could be the only remedy for Southern California’s drought. Stephen Manga / Daily Nexus

For the past five years, Lake Cachuma has been shriveling in size as rain levels drop to historical lows, measured as the driest five years on record. Despite promises of heavy El Niño rains in 2016, the Santa Barbara area received only 70 percent of the expected precipitation, resulting in wildfires and rapidly diminishing reservoirs.

Large amounts of rain at the beginning of 2017 left many hopeful for a swift end to California’s six-year drought. According to the Santa Barbara County Reservoir and Rainfall report, the county has received 135 percent of normal rainfall this year.

Storms beginning this week may affect the drought classification in Santa Barbara; even large storms last week did not abate a D4 status which classifies Santa Barbara as in “exceptional drought.” The rest of the state, however, is down to two percent D4 conditions from over 18 percent.

The National Weather Forecast estimated peak precipitation levels between 10 p.m. and 4 a.m. the night of Jan. 18, when the county was projected to receive between 0.26 and 0.49 inches of rain. A second storm is expected to arrive Thursday evening and continue through mid-Friday with an estimated one to three inches of rain.

The third and largest storm is expected to arrive Sunday, which at minimum will have as much precipitation as the storm before it.

“The drought’s not over, but a little bit of relief is good,” Fayram said. “We will see some inflow into Lake Cachuma; it stands to put water in the reservoir for the first time since 2011.”

KK Holland, from the Goleta Water District, said, “The biggest potential impact will likely be not from local rainfall here, but an increased state water allocation due to the heavy rains in the northern part of the state.”

Despite the seeming lack of impact, Holland said, the district is “obviously thrilled to see much needed rain.”

The last drought report released Jan. 12 by the National Drought Mitigation Center showed “major changes were made” across California due to the increased precipitation this year, but water supply in Santa Barbara County still lags way below normal with a “measly” increase in Lake Cachuma.

According to a report from the Santa Barbara County Flood Control District released last week, Lake Cachuma was over 753 feet in elevation in 2011, and it stored over 193,300 acre-feet of water.

This is only 9.2 percent of capacity, which is 193,305 acre-feet. In order for Santa Barbara to move down to D3, which means the area is in “extreme drought,” there would need to be more hydrological impact on Lake Cachuma, which fulfills around half the water needs of the South Coast.

David Miskus, a meteorologist at the National Oceanic and Atmospheric Administration and author of last week’s drought report, said, as far as “hydrological improvement,” Santa Barbara is “not very affected.”

Tim DeVries, an assistant professor in the UCSB geography department, said the county will need double the expected rainfall in 2017 and 2018 to offset the drought. The average rainfall in 2016 was half the expected average, meaning an end to the drought would require four times that value for the next two years.

“This year, we got 18 inches of rain, and what we’d need is essentially two consecutive years of 30 inches of rain,” DeVries said. “Right now, we’re perhaps on track for that this year, it’s kind of too early to say.”

Much of the status of the drought will be contingent on February, which has historically been California’s wettest month.

Goleta Water District declared a Stage III Water Shortage Emergency in May 2015, with a target of decreasing water usage by 35 percent. The district has imposed restrictions on outdoor watering, agricultural water usage and mandates that hotels and other lodging post notices of water shortage.

Conservation in Goleta to date has been around 27 percent, though for some months conservation has been as high as 40 percent, with “single family consumers” conserving the most.

According to Holland, the rainfall totals to date for the year are eight inches for Goleta.

“That isn’t enough to offset the previous years of below average rainfall,” she said in an email.

“We are still early in the rainy season and the watershed is so dry that until this last storm, there wasn’t enough rain to get any inflow into the lake.”

Despite the large amounts of rain, Holland said she remains pessimistic about the future of Goleta.

“The most recently released drought index shows the South Coast as one of the only remaining areas of the state to still be in exceptional drought,” she said in an email. “If anything, additional restrictions on outdoor watering may become necessary by summer.”

It is unclear whether this drought is a symptom of human-caused climate change because of the relatively short time period; climate change is generally observed over the course of several decades.

“If we go into a 30-year dry spell, then we can pretty much say, okay, this is climate change, this is not due to natural climate variability, this is human caused,” DeVries said.

The lake will fill up and spill in the near future. Raise the dam 5 feet and be ready to catch the water. It is not rocket science!!!

Why don’t they just get a super long hose and fill up the lake?

“If we go into a 30-year dry spell, then we can pretty much say, okay, this is climate change, this is not due to natural climate variability, this is human caused,” DeVries said.

Preposterous and unscientific assertion. I suppose he’ll claim that all the hundreds-of-years-long periods of warming and cooling of the planet prior to the existence of humans were “human caused” too? He must be having a hard time dealing with the fact that “climate change” has now been removed from the White House website.

It is a well established fact that an overall warming results from an increase in atmospheric CO2 concentrations. This was first worked out in the 19th Century, and anyone with a basic grasp of physics should be able to see why this is. What is harder is to predict how this will affect rainfall patterns and while computer simulations do suggest more dry spells for California, this question has not been settled yet.

Not a rocket scientist.

He doesn’t need to b a rocket scientist. His field covers the topics being talked about.

What does the author mean by “expected” precipitation? Is this supposed to mean the median, mean, or the large amount of el Nino rain predicted for last winter? Particularly confusing is “The average rainfall in 2016 was half the expected average”. Someone should proof read these articles.