The Daily Nexus
News
Uncertainty for Undocumented as Inauguration Looms
January 12, 2017 at 5:53 am by Supriya Yelimeli 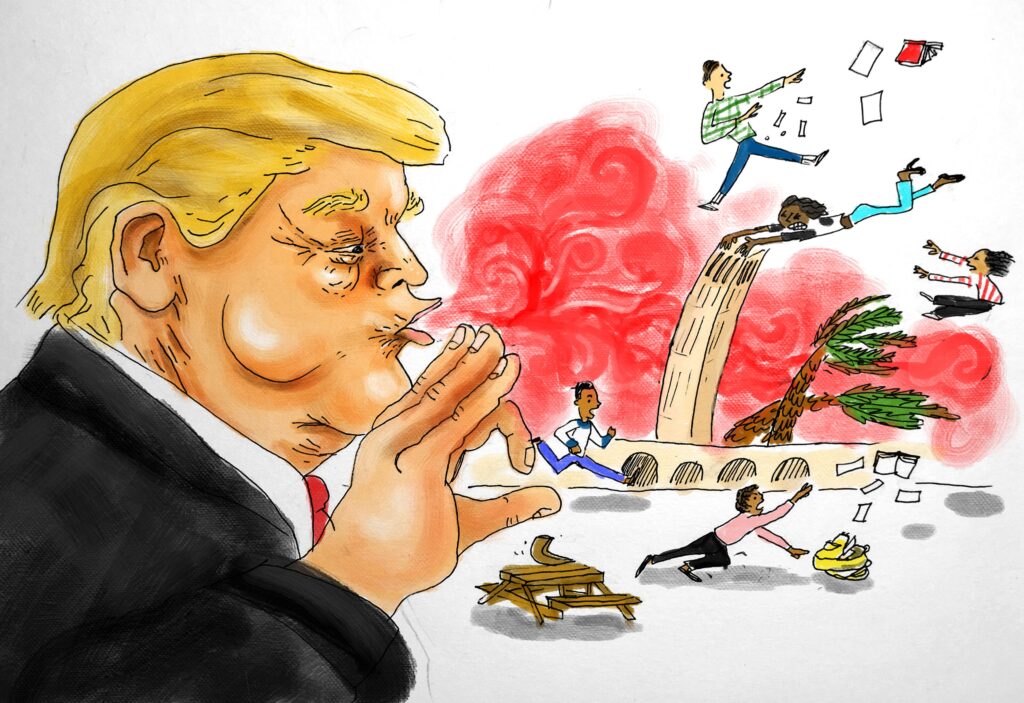 Over a thousand students filled the UC Santa Barbara campus on Election Day 2016 in protest of president-elect Donald Trump. As the echoes of protests die down throughout the country, students are once again bristling in anticipation of a new presidency that may cause irreparable change throughout the country.

Undocumented students have fallen into the center of this struggle, pinpointed by Trump’s unfavorable rhetoric regarding undocumented immigrants and President Obama’s 2012 initiative, Deferred Action for Childhood Arrivals (DACA).

The California government, the University of California and university law enforcement now attempt to provide answers in the eight days until inauguration.

In late 2016, UCSB Chancellor Henry T. Yang signed a statement endorsed by the Association of American Universities in support of DACA. Chancellors from all 10 UC campuses, including UC President Janet Napolitano, also signed the statement.

Napolitano, a trained lawyer, was the former United States Secretary of Homeland Security from 2009 to 2013. She was criticized at the beginning of her term for implementing the controversial Secure Communities program, an immigration-enforcement policy that detected undocumented immigrants via fingerprints taken by local police.

“There are a lot of questions with the incoming Trump administration, what it means for universities and what it means for students,” Napolitano said on Jan. 6, speaking to a group of UC journalists. “We don’t have answers to those questions, nobody knows the answers.”

To combat the unknown, the University of California Office of the President (UCOP) released a set of principles in December listing the boundaries of university police and medical services. “We are very clear that we are not turning university police into surrogate immigration agents, and we’re not gonna be voluntarily turning over student records,” she said.

When asked about retaliation from the federal government if the UC does not comply with the new presidency, Napolitano said the UC was not in immediate threat.

Others, though a small minority, support Trump’s ideas and believe undocumented students do not have a place on UC campuses.

A student who wished to stay anonymous, fearing retaliation, has begun organizing efforts to report undocumented students who attend UC Santa Barbara. He said the group is in a “planning and monitoring phase only” prior to Trump’s inauguration, hoping for a “likely scenario” that the future president will repeal DACA.

“If Trump lets us down, then it is possible that this will lead nowhere,” he said. “We have a large and growing number of students on board and we have notified the university of our plans, but for the time being, we are all waiting until January 20th.”

The group is not affiliated with any campus organization, according to the student, and its goal is ensure that UCSB abides by United States immigration laws.

“I cannot reveal our tactics yet,” the student said. “All I can say for now, is that we consider ourselves to be an honest and patriotic team of whistleblowers when it comes to the potentially illegal activity happening at UCSB.”

Students who have been vocal about reporting undocumented immigrants on the UCSB campus have received threats on social media, and the student who spoke with the Nexus said he had heard violent, threatening rumors and been called a “fascist and a Nazi.”

In response to a question regarding students who hope to join similar groups at other UC’s, Napolitano said Jan. 6 that it would be more prudent to focus on reporting criminal activity, rather than young people who travel to the U.S. to gain an education.

Students are currently in the final planning stages of a large walkout to take place on inauguration day Jan. 20, with the Student Activist Network hosting several meetings to create posters and make maps of a march route.

Administrators and faculty from UCSB have created an ad-hoc committee to discuss undocumented students’ safety while on campus. Among several ideas, campus administrators hope to distribute “know your rights” pamphlets, create faculty sanctuary homes for students and reinforce mental health services for students who feel threatened.

“We will continue to arrest and seek prosecution of anyone who has committed a crime in Santa Barbara, but the immigration status alone of individuals in Santa Barbara is NOT a matter for police action,” she said in a statement.

It’s about time. Come here illegally; get sent back home. Even some Democrats, especially those whose jobs were stolen by illegals, care about laws.

Maybe you should read US history. Your “American” ancestors were all illegal immigrants, trespassing on native american land and you are benefitting from that by being a citizen and deciding who can come and who can’t. Plus laws can be changed and not everyone follows them if its not harmful. When was the last time you saw students organizing a group to expose underage drinkers at the many parties SB students have. Illegal immigrants aren’t taking your jobs. Companies are outsourcing them so they can work people to death. And if anything, you should blame the country for imperializing and… Read more »

The point you make about our ancestors stealing land from the indigenous people is as old as the hills. Based on statements made by Trump and other Republicans, it is unlikely we will deport undocumented students and others who otherwise have no criminal history – and by criminal history, stuff more serious than jaywalking and driving with expired tags. I agree with this personally, beef up border security and create a pathway for citizenship for the ones already here. I’m not going to cite any studies, but even conservative sources have acknowledged that a mass deportation of “illegals” who are… Read more »

There are still many Conservatives who don’t want a pathway to citizenship because it will infringe on the fundamental moral issue of “AMNESTY”. Our president isn’t some moderate Conservative. He’s a radical republican who has been flipping back and forth on his stance on immigration. And check out the video of Rick Santorum when a DACA student asked him about ways for her to stay since she is a college graduate engineer who is contributing to this country. His response? Go self-deport and come back. Little does he know she would have a 10 year ban, then wait in the… Read more »

No my ancestors came here legally. The Indians didn’t have any immigration laws… or borders…google: “nomad”. Grow a brain, sweetie.

Of course They didn’t have any immigration laws because who would’ve thought white people would’ve come, but some white europeans imposed themselves and then made up some Thanksgiving story bullshit to cover it up. How about how half this country used to be Mexico, and was unwillingly stolen through the Mexican war. How about Hawaii, in which American business owners forced the native Queen out and turn it into a state. No need to google anything when you have an education on US history.

That’s right, comrade. It’s pretty hard to break laws that didn’t exist. That’s why civilized society evolved, starting with the rule of law including deeds of sale and private property. If you want bloody anarchy, there are plenty of places you could live that don’t have laws.

But in order to prove you are not a hypocrite, feel free to donate your home to the first native American you meet. I’m sure that will happen.

Since when did I talk about property rights? I never said I was against the right of private property. I’m trying to point out your delusional racial privileges. You think you’re native, and don’t need to empathize how immigrants might come here legally or illegally based on external circumstances. Rather than asking me about giving up my house to a native, why didn’t you ask why our government isn’t mostly native americans? Why are the people who dictate our livelihood and laws mostly white? Unless you’re blind to white privilege and superiority. And again, you assume I don’t believe in… Read more »

Let’s think of when US did break laws: US colonization of Philipines, Korea, Latin America, Hawaii, Puerto Rico, Guam, etc.

Let’s face it, you’re a conservative snowflake. Get over yourselves

Lmao! Who is this “whistleblower” guy?? Probably fake news but hey whatever makes a great story!

How exactly will this “whistleblower” guy determine students’ immigration status? Is he going to ask to inspect students’ ID’s and social security cards and run them through E-Verify?

Ikr? Who the hell do they think they are. ICE? They’re just pathetic, ignorant students who need to focus on their education instead.

Or focus on getting high, drinking beer, and meeting some nice young ladies (with the occasional studying when necessary). I wouldn’t go so far as calling them ignorant though – I used to have similar views in my younger days. It wasn’t until I started interacting with more (trying to think of a better way to say “Mexicans”) that I realized that most of them are friendly and hard-working and want to keep a low profile. My gardener charges me $80 per month to maintain my yard weekly and we’ve had our nanny for 4 years who busts ass and… Read more »

Local jurisdictions can virtue signal as much as they’d like by ignoring illegal aliens, but as soon as federal funding starts getting pulled then they will comply with the law.

From Kellyann Conway “The whole idea that they’re being separated or ripped from their family, it’s temporary”. Sound like Germany circa 1938? Bin Laden won — 16 years ago! He and his followers outsmarted the average American into happily giving up his/her principles and freedoms (patriot act anyone?)for the illusion of safety. We now are left forfeiting what the country (we assume to be, at least in part, preserving) stands for — thus positioning ourselves exclusively for self-preservation (country be damned). America rapidly is slipping away from any resemblance it once had to what it was that made America Great… Read more »