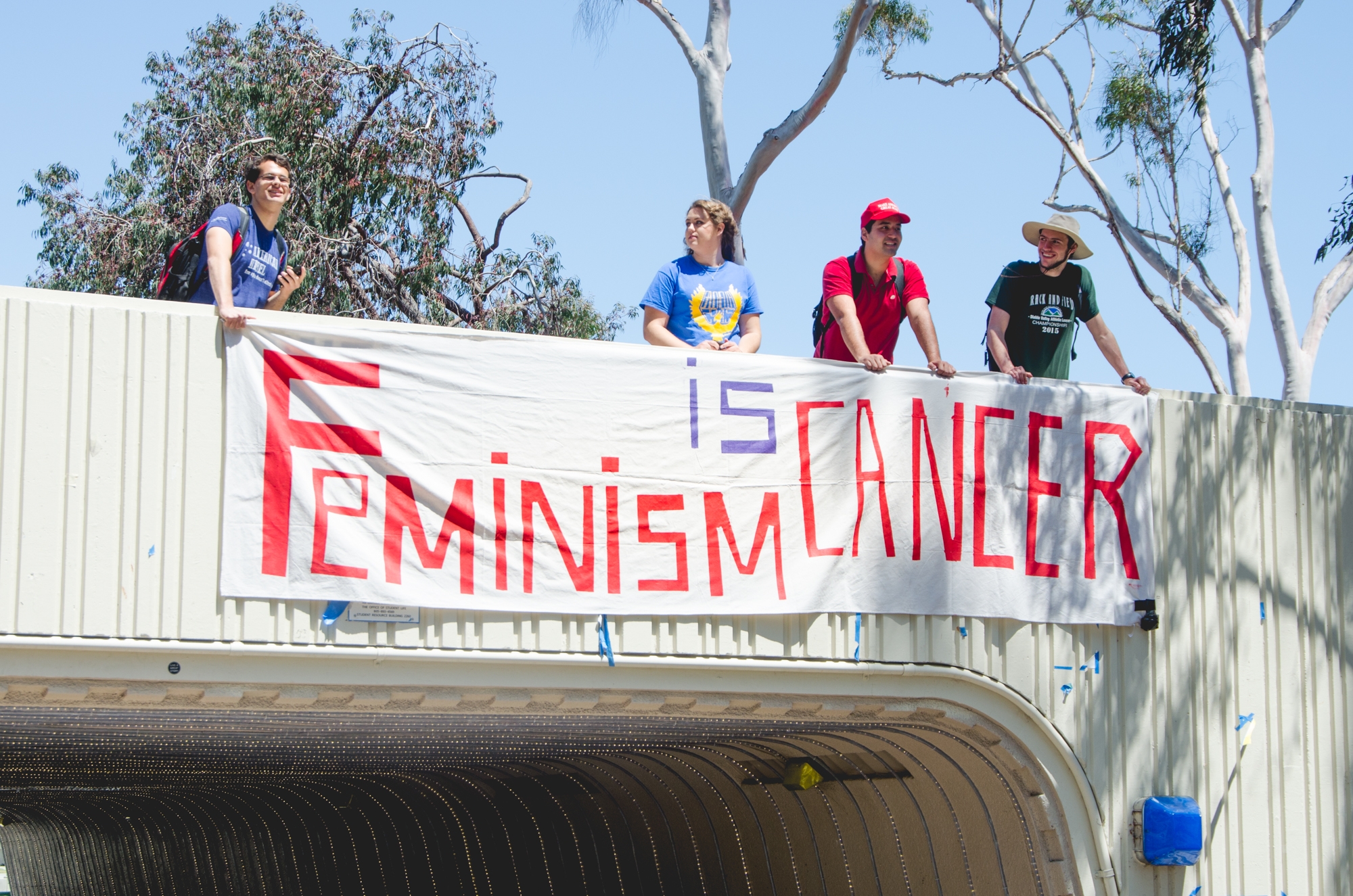 Milo Yiannopoulos, a journalist and alt-right provocateur, is no longer coming to UC Santa Barbara for a lecture originally scheduled for Jan. 17 in Campbell Hall. 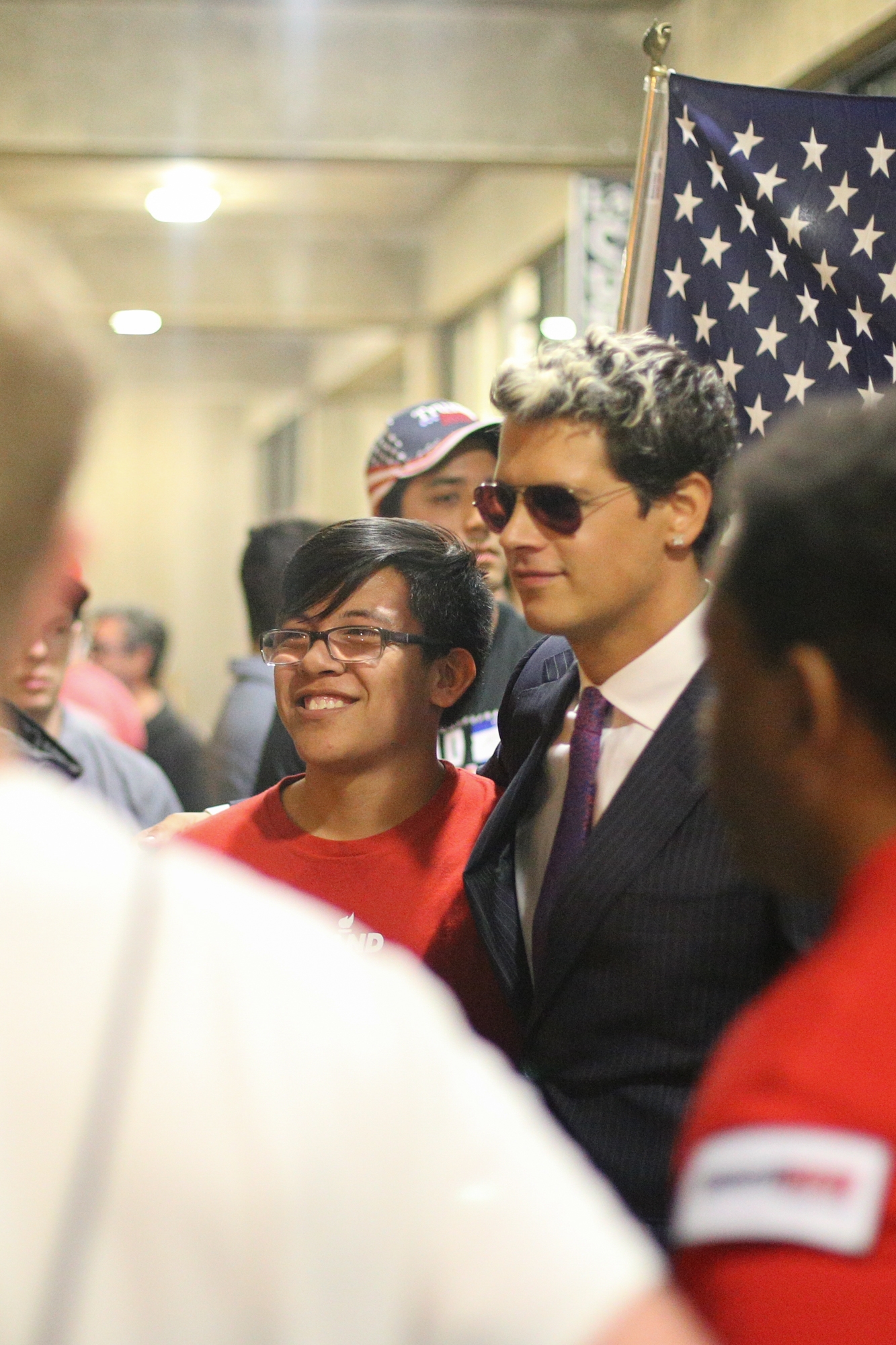 Yiannopoulos poses with students in Storke tower on May 26, 2016. Jenny Luo/Daily Nexus

Yiannopoulos’ handlers asked College Republicans if they could reschedule to a later date in January or February, then asked to move the visit back to January 17, Penate said.

“It seemed like the communication between us and his team just wasn’t going that well,” Penate said. “It would have been difficult to scramble for reorganizing for the original date after we had thought that we would have more time.”

Yiannopoulos, an editor for the online publication Breitbart, headlined “Feminism is Cancer” in Corwin Pavilion on May 26, 2016.

The event was sponsored by conservative student group Young Americans for Liberty and sparked extended controversy, with students expressing their distaste for the name of the event and Yiannopoulos’ statements.

Lots of students also expressed their taste for the name of the event and MIlo’s statements but the Daily Nexus can’t report that as the Ministry of Information for those who have terminal cases of cancer.

I am no fan of feminism — but would not want to count you as a like-minded colleague if ANY relevance is accorded to the word “mind”.

You sound like a smug son of a bitch; I don’t think they would want to be your colleague anyways

I take your content-free comment (e.g., avoiding any reference to my claim of conceptual incoherence) as a compliment. If I seem smug in your opinion, I take comfort in the categorization.

Let’s be honest you hate Milo and you went to the college. So you will accept shutting down free speech. You are a poor excuse for a representative for the college alum. You forget college is to challenge your mind and open discourse. You just want puppets.

They do not usually invite the kkk or neo nazis to speak at colleges, even though they have every right to speak there. The milo yidiots are just a repackaging of those ideas. This time with a British accent and an even more condescending attitude.

They don’t invite neo nazis or the KKK because these groups are composed of white supremacists who denounce the character and existence of others simply based on the color of their skin and not based on rational, fact based reasoning, therefore these groups have little credibility and opportunity to engage in public discourse. Milo, on the other hand, is not even remotely close to these groups you have compared him to. His denouncement of political ideologies (not a race or nationality, mind you) are based on peer reviewed, scientific data and rational, reasonable evidence that is appropriate for any political… Read more »

He’s free to speak wherever he wants. The consequences of being a bigot are that you aren’t welcomed in polite society. A more appropriate venue for his trolling would be your drunk uncles house. Or Facebook. Or a bar at 2am. He has no place in any university, especially not a UC.

Freedom of speech doesn’t mean you’re protected from the consequences. Go ahead and make your unappreciated racist and oppressive events, but don’t expect students are going to embrace it. I’m all for discussion and different views but most of the time these events are just ridiculous conservative propaganda that does no good to unite different nuanced perspectives.

Evidence of racist and oppressive speech uttered by Milo? I am a student here at UCSB and appreciate different viewpoints from conservatives, liberals, libertarians, and other political groups. Who are you to decide what is considered political propaganda or not? It could be argued that many of the courses taught here are taught by radical left propagandists who believe in a future Marxist society

Blame it on scheduling instead of not being able to afford security for all the protesters. Sure.

Last year it was wonderful, he was well treated in UCSB, escorted on a queen’s chair. After the pathetic anti-free speech nazis he found in UC Berkeley I can see him being more careful and requiring more security.

Outside of Milo’s flamboyant mirroring of radical feminists and inverted representation of the lefts’ covert oppression, he backs up his exaggerated orotundity with facts and science of peer-reviewed journalism; which his adversaries fail to refute. Instead, Milo antagonists continually resort to labels and vilification of character, yet never respond to his factual claims because they simply can’t… it is typical for personality disordered individuals to respond to facts, science (and the establishment of boundaries) with histrionics and claims of abusiveness because they have no other recourse.