Otger Campàs, an assistant professor in UC Santa Barbara’s Department of Mechanical Engineering, helped develop a compelling new technique which will allow scientists to study the mechanical environment of cells for the first time in their natural, 3D conditions: the living tissue.

Based on the biochemical and mechanical cues they sense in their environment, cells are able to take important actions, such as deciding what type of cell to develop into. Factors known to affect cell behavior include forces applied to cells (whether neighboring cells are pushing or pulling on them) and mechanical properties like rigidity or fluidity of their environment.

Campàs, who holds the Mellichamp Chair in Systems Biology and Bioengineering at UCSB, said, “For instance, stem cells that feel a soft environment like Jell-O, decide to become neurons because the compliance of brain tissue is similar to Jell-O. Cells can also decide to divide or not depending on the compliance of the environment. Most important decisions that cells make are influenced by the mechanical properties they feel.”

Previously, scientists were limited to observing how the mechanical environment of cells influenced their behavior in synthetic laboratory dishes. While permitting researchers to gain understanding of the traction forces of cells, in vitro studies were insufficient for learning about the forces cells produce within forming tissues and organs and for measuring mechanical properties within three-dimensional developing tissues and organs. But presently, the technique provides a way to study these inquiries in the 3D, native habitat of cells.

The procedure is carried out by injecting magnetically responsive droplets – each just slightly larger than a single cell – inside tissues and in between cells, and then applying a magnetic field to deform the droplets. When they deform, the droplets generate forces onto the surrounding cells. 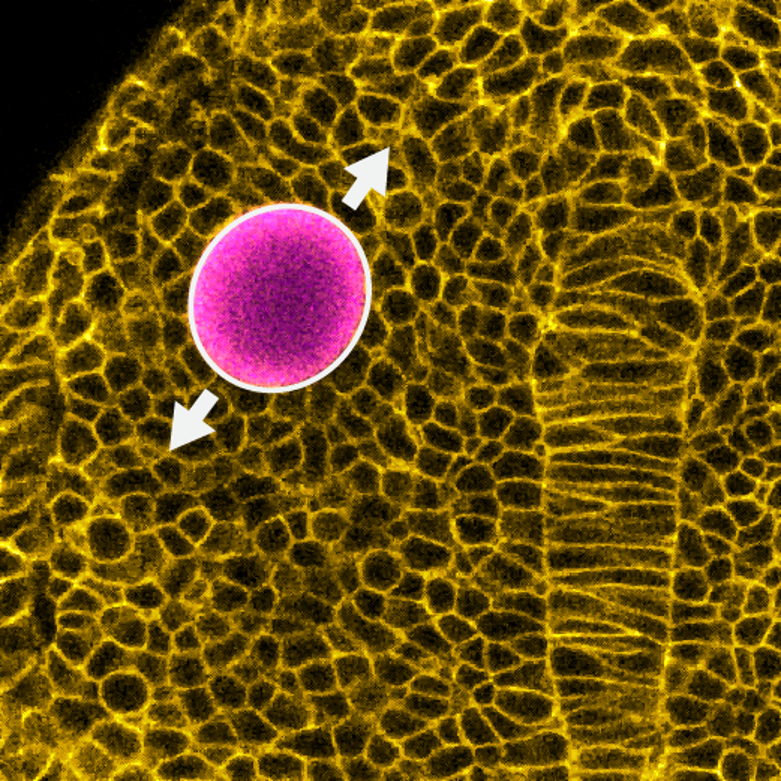 A magnetic droplet (magenta) is being deformed by an applied magnetic field in the direction of one of the arrows. The droplet extends along that direction, pushing on the cells in the tissue. The membrane of cells are labelled in yellow. The droplet is located at the posterior end of the extending body axis of a transgenic zebrafish embryo. / Courtesy of Otger Campas

“[This] allows us to literally poke individual cells inside developing organs,” Campàs said. “Moreover, we monitor the shape of the droplet over time when a magnetic field is applied on it which allows us to probe the compliance or fluidity of the cell’s environment inside living tissues. In other words, we can reveal what is the mechanical environment of cells and poke them in their natural environment, which allows us to know what mechanical cues they are exposed to as tissues develop.”

“We mapped how the mechanical properties of the growing [zebrafish] embryo changes along its axis,” said Campàs. “We found that the tissues are fluid, like very viscous honey, but the viscosity is lowest at the end of the body axis, exactly where it needs to grow. This shows that the physical principles behind sculpting embryos are similar to shaping molten glass in glassblowing.”

The technique will enable Campàs and other researchers to study how organs and tissues are created in 3D settings, which is not yet understood. Indeed, it holds great potential for numerous implementations. By helping scientists understand how tissues behave mechanically, this could be significantly conducive in tissue engineering applications. It has opened the possibility of examining how the mechanical cues cells respond to affect cellular decisions in living tissues and grasping a better understanding of mechanical signaling – the “sense of touch,” according to Campàs – of cells.

Furthermore, as many diseases, including cancerous tumor growth, are linked to abnormal changes in the mechanical environment of cells, scientists now have a means to investigate how these atypical mechanical conditions contribute to the progression of disease.

“We will be able to study how mechanical cues affect disease progression using living tissues, without having to take the cells [from] their environment and study them on synthetic dishes,” Campàs said. “This is important because lab dishes provide a very different mechanical environment than the native 3D tissue. We will also be able to understand how the genetic code and the physical world interplay to build these complex structures.”

The latter application of the technique is what Campàs and his colleagues are currently focusing on.

“We are now using this technique to understand the role of mechanical cues in shaping embryonic tissues. Beyond the formation of 3D tissues and organs, we are studying mechanical cues in tumor progression compared to [those in] healthy tissues,” he said.

Campàs’s pioneering research has been published in the journal Nature Methods.