The Daily Nexus
Sports
Non-Conf. Schedule Ending, Gauchos Play in Battle on the Border
December 19, 2016 at 12:00 pm by Sean White

After earning its first road victory of the season, the UCSB women’s basketball team will continue its journey away from home to participate in the Battle on the Border Tournament this Monday and Tuesday.

The tournament will be two of the team’s final three non-conference games. 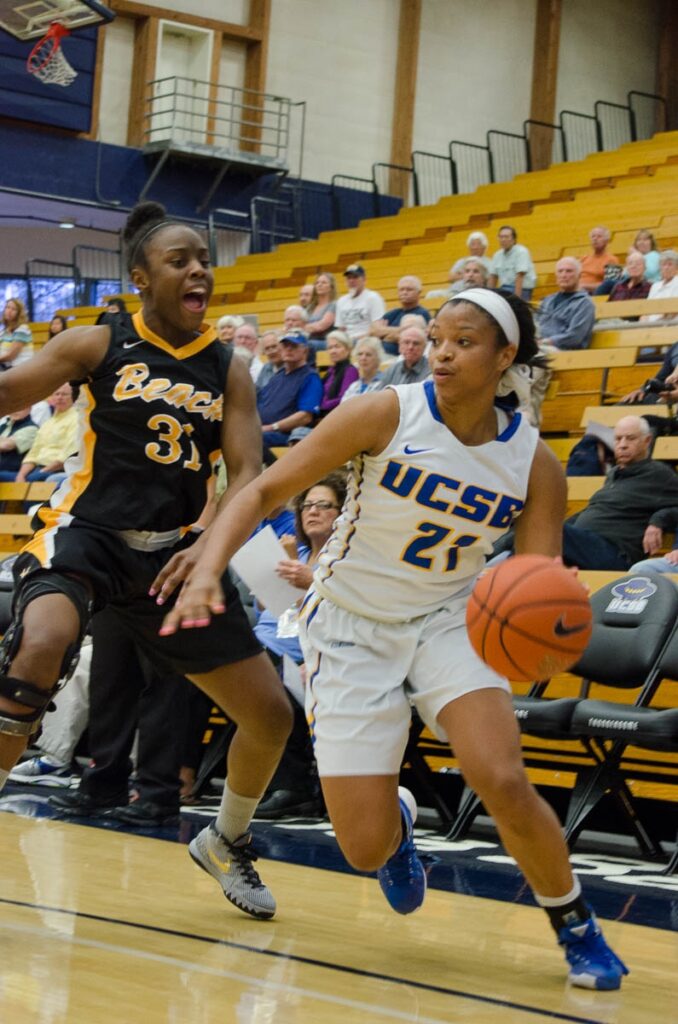 Chaya Durr slides around a defender towards the basket. Christina DeMarzo/Daily Nexus

It will be the first and only back-to-back for the Gauchos this season as they will open the tournament against Texas A&M Corpus Christi and North Dakota State the following day. This will be the first time in program history UCSB has faced either program.

Santa Barbara will look to sustain its momentum, entering its pair of games at 3-7 after ending a five game losing streak. Texas A&M Corpus Christi comes in at 4-5 as it is on a current two game slump. Able to recently overcome a nine game losing streak is North Dakota State as it sits at 2-9.

Providing the most consistency has been the Gauchos’ backcourt duo of senior point guard Onome Jemerigbe and redshirt junior guard Drea Toler.

Although not widely known for their scoring abilities, with Jemerigbe and Toler averaging 8.4 and 6.9 points per game, respectively, the two have efficiently distributed the ball to create scoring opportunities.

Jemerigbe’s total of 39 assists is tied for first in the Big West, while Toler’s 35 dimes ranks fourth in the conference. Both also rank in the top 10 of the conference in assists per game with Jemerigbe in second with an average of 3.9 and Toler in fifth at a 3.5 average.

Most recently, it was Toler that emerged to get UCSB over its losing woes with the game-winning jumpshot in the team’s victory over Fresno State on Friday. She has been a pivotal asset in the Gauchos’ bench rotation as her PPG average leads all second unit players.

Coming off its season-high three-point percentage of 50 percent in its win, it is likely UCSB will attempt to maintain its hot hand from long distance. On average, the Gauchos make 7.1 three-pointers per game and are just two three-pointers short of being tied with UC Davis for second place in total three-pointers made this season with a current mark of 71.

Leading Santa Barbara’s three-point attack is redshirt sophomore Sarah Porter. She possesses a team-high total of 25 made three-pointers and is third in the conference in three-point percentage at 43.1 percent.

Nonetheless, UCSB has successfully defended the perimeter as well. The Gauchos lead the Big West in opponent three-point percentage, holding teams to a 25.9 average.

Yet, the Gauchos may meet their match Monday afternoon facing Texas A&M Corpus Christi as the Islanders’ defense is one of the best of their conference.

Texas A&M Corpus Christi ranks third in the Southland Conference in scoring defense, allowing 61.1 PPG. Most notably, the Islanders hold a conference-leading 29.6 opponent three-point percentage. They rank second in opponent field goal percentage too, restricting past teams to a 37.9 average.

A pair of wins could send Texas A&M Corpus Christi into Southland Conference play with a winning record for just the third time in program history.

While the Gauchos will face more of a defensive battle in playing the Islanders, they will hope to contain North Dakota State’s junior guard Taylor Thunstedt.

Thunstedt leads the Bison in scoring with 16 PPG which ranks third in the Summit League. She also leads the league in total made three-pointers with 42 and is fourth in points scored with 176 this season.

Another concern for UCSB will be dealing with the size of senior forward Emily Spier. She’s behind Thunstedt in scoring with an average of 10. 3 points per game, but is the team’s leading rebounder, collecting eight per game, ranking third in the Summit League.

Adding to the Bison’s presence on the boards is senior forward Brianna Jones. She is second on the team in rebounds at 7.4 per game. Freshman forward Reilly Jacobson follows with 5.4 rebound per contest.