A suspect was arrested Wednesday for a hit-and-run incident Dec. 2. that left a Santa Barbara City College student in the hospital with life-threatening injuries. 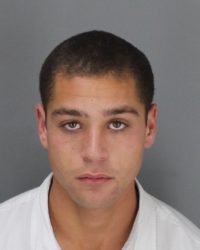 SBPD officers found Drew Christopher Daly, 23, lying face down on the 300 block of W. Cabrillo Boulevard after receiving a report from a passerby at 4:15 a.m. on Dec. 2., Harwood said.

Daly, who attended SBCC, was walking near his apartment when he was hit, and Harwood said emergency services transported him to Santa Barbara Cottage Hospital to be treated for life-threatening injuries.

According to Harwood, officers determined during the investigation that Vega hit Daly at approximately 2:30 a.m., leaving him on the side of the street for approximately two hours before being discovered.

Surveillance cameras near the location identified the car as a 1999 Honda CRV, and Harwood said SBPD officers found the vehicle Wednesday at Vega’s residence on the 100 block of Harbor Way.

Vega was arrested for hit-and-run causing injury, commission of a felony while released from custody, unlicensed driving and false information to a peace officer, according to Harwood.

He said Vega was out of custody, on bail, for a previous robbery arrest at the time he allegedly committed the hit-and-run.

Drew Daley, 23, is currently being treated for life-threatening injuries in the Santa Barbara Cottage Hospital. Photo via Facebook

Drew Daley is currently in a coma with a traumatic brain injury, according to elder sister Leah Daly, and will likely suffer a significant disability for the rest of his life.

“He formed really deep and caring relationships and he was extremely loyal to his friends,” Leah Daly said. “He was a goofball and he was a little bit of a mischievous kid. He liked to skateboard.”

Drew Daley worked at the Bacara Resort, and his sister described him as a “fun, balanced kid who was always grounded to what is important.”

Daly is originally from Seal Beach, Calif. and came to Santa Barbara to attend school two years ago. Daly’s sister said he had plans to transfer to Cal State Northridge, closer to his family’s home, and pursue a career in occupational health.

Leah Daly and her father were in Los Angeles when they received a call from the SBPD. They immediately left for Santa Barbara, and Drew Daly’s mother flew in from a business trip in Orlando, Fla.

“Inside, they are just shattered, on the outside they are doing okay,” Leah Daly said of her parents. “They’re trying to stay strong, they’re trying to focus on the day by day, the hour by hour.”

Her brother’s injuries were so severe that it was likely his condition would get worse, Leah Daly said. “Because that didn’t happen, that has been the small victory so far.”

On Wednesday, Leah Daly told the Nexus that her family and others would pursue a “large, concerted effort to locate this car” and begin posting fliers throughout Santa Barbara to spread the word. She also said investigating officers from SBPD were “working so hard,” and “I am so inspired by what I see from them.”

Although she was committed to the search and wanted to keep herself busy, “nothing is gonna make this okay, because it’s not okay,” she said on Wednesday.

After receiving the news of Vega’s arrest Thursday, Leah Daly posted on Facebook saying, “We are relieved that the investigation is no longer in our hands.”

“Now we can focus on the most important matter, which is Drew’s recovery,” she said. “Full steam ahead.”

“The public’s assistance has been instrumental in this case,” Harwood said in a press release. Investigation is ongoing, and he asked that anyone with knowledge of Vega’s activities in the hours before and the morning after the collision contact SBPD Traffic Investigators at (805) 897-2322.

Vincent Vega – isn’t the name of John Travolta’s character in Pulp Fiction? I’m glad they caught this scumbag, assuming he’s the perp. So they guy can afford to live in Montecito but drives a ’99 CRV and commits robberies. Very sad for the Daly family.

Haha – Vega is a little faggot that shrieks like a girl and climbs up the wall like a pussy and does attacks with his little claw thingie. But an adept dragon punch or sonic kick will neutralize his flying attacks real fast like!