The UCSB women’s basketball team was only outrebounded by LMU by a total of four rebounds 39-35 in Friday’s game, but that narrow margin doesn’t come close to telling the true story of the boards. 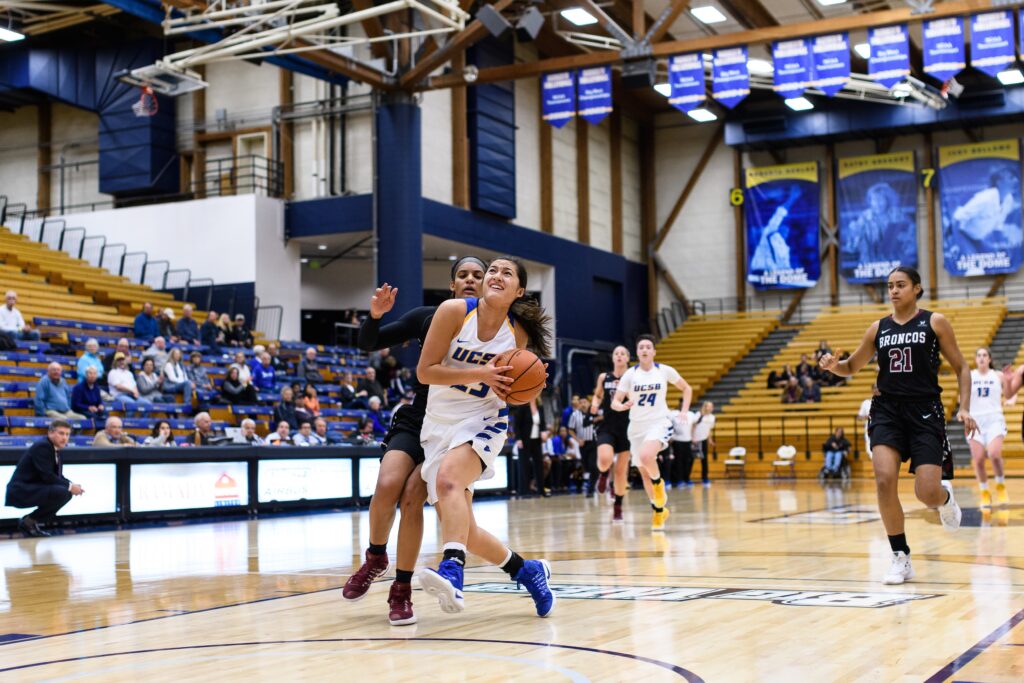 Coco Miller starts a layup, having quickly pushed down the court after a steal. Eric Swenson / Daily Nexus

In reality, the Gauchos controlled the glass for the first three quarters of the game, pulling down 33 rebounds to the Lions’ 23.

In the fourth quarter, however, LMU flipped the script and snared 16 rebounds to the Gauchos’ three, a massive disparity that played a major role in the Lions’ 57-55 home win.

Down early, UCSB — now 2-5 after losing its third consecutive game — battled back into contention through the middle two quarters and forced the Lions into a back-and-forth battle for control in the fourth quarter.

The Gauchos’ weakness on the glass undermined those efforts, however, as LMU, who now stands at 4-4, was able to grab seven offensive rebounds in the final quarter alone.

The Lions made sure not to waste those second chances, scoring eight points off of offensive rebounds in that climactic fourth quarter. Indeed, a Cheyanne Wallace offensive rebound with 22 seconds left in the game turned into two made free throws for sophomore forward Wallace, which gave LMU a lead that it never again surrendered.

One contributing factor to the Lions’ high offensive rebound count was that the Gauchos played excellent defense in that fourth quarter. LMU shot only 26.7 percent from the field in the fourth, which of course created lots of opportunities for offensive rebounds.

UCSB, on the other hand, shot a respectable 46.2 percent in the fourth quarter Friday night, but were unable to come up with a single offensive rebound.

Shortcomings on the glass, plus the Gauchos’ 0-0 night at the free throw line, was what made the difference in the fourth quarter.

Despite 11 personal fouls, LMU managed to play efficient defense in preventing the Gauchos from reaching the bonus and getting to the free throw line.

Up 55-54 with only 32 seconds left, the Gauchos were in a position to make their struggles on the boards and in getting to the line irrelevant. All they had to do was hold onto the ball and milk the clock, and the Lions would have practically no time left to score.

With several fouls to give, however, LMU was in a position to make milking the clock difficult for UCSB. Junior Lion guard Makenzie Cast did just that, fouling UCSB senior point guard Onome Jemerigbe and coming up with a steal in quick succession. Wallace knocked down two free throws a few seconds later, and suddenly LMU had all the control.

UCSB sophomore guard Coco Miller played all but two minutes of Friday’s game and put up a truly utilitarian stat line of nine points, four rebounds, three assists and two steals. Redshirt sophomore guard Sarah Porter and Jemerigbe led the Gauchos with 15 points each. Those were a particularly efficient 15 points for Jemerigbe, who played 24 minutes off the bench and went 7-8 from the field.

Next up for UCSB is the last game of their four-game road trip. The Gauchos will take on San Diego State in San Diego on Sunday, Dec. 11 at 2 p.m.