The Daily Nexus
Sign of the Times
When it Comes to Political Discourse, Think Before You Argue
November 25, 2016 at 2:02 pm by Zach Morgan

Since my early years, years when I first learned about the leadership of our nation and began to take my first toddling steps towards independent thinking, I’ve always been reluctant to discuss my political opinions or preferences with others. This is a result of my father’s advice, advice given at a time when he knew I wouldn’t really reflect on it until many years later. I don’t remember the exact details of the conversation; it was a brief exchange, I know that, knowledge passed from an elder in just a couple of sentences. He said, in the most general terms, that discussing your opinions regarding political issues was one of the most divisive and rude things you could do, and since then, the thought of discussing politics or political opinions has always made me supremely uncomfortable.

It’s like talking about sex or your bathroom habits, but perhaps more personal and leagues more controversial. This is not to say I don’t have opinions or political beliefs (I do), but I prefer to observe, concealing my true thoughts and beliefs from even the closest of my friends. 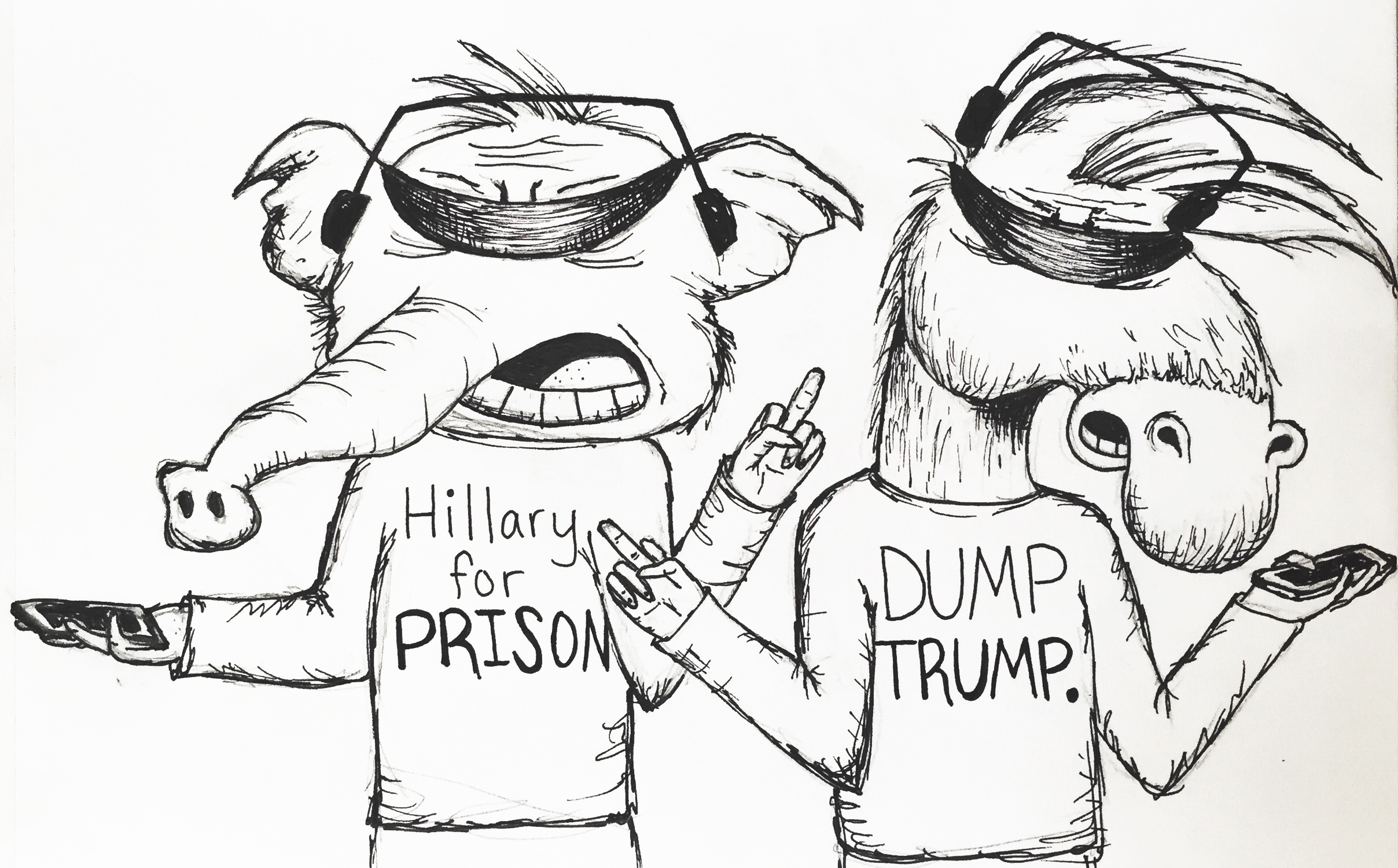 But the aftermath of this election, specifically what I’ve seen posted by friends, family and forgotten high school acquaintances on Facebook and other social media, has finally tempted me past my better judgment. Stubborn as I may be, I have been drawn from the shadows of my quiet observation. I’ve seen outcry, I’ve seen celebrations, I’ve seen opinions and views from everywhere on the political spectrum plastered all over my feed, and I am not necessarily here to discuss these things. Instead, with the space I have here I’d like to offer my view on the greatest loss I’ve seen this election cycle: the loss of basic critical thinking and understanding.

Observing my Facebook friends, conservative and liberal alike, over the past two weeks, I can’t think of another time I’ve seen as much hate, vitriol and ignorance spewed by people of both political persuasions towards those of the opposite. If it wasn’t clear to me already, I’ve learned that politics, particularly amongst our generation, is very much a team game, and like any team game, blind loyalty is pervasive and, in my view, highly damaging.

Though liberal in my political views, I am increasingly disillusioned with the Democratic Party; I hesitate to label myself a “Democrat.” Though my views align mostly with theirs, the corruption present in the party — most apparent by the biased pre-selection of Hillary Clinton some months ago as the chosen one for president by the higher ups in the DNC (poor Bernie) — is impossible to ignore, yet it was widely ignored by the majority of my hard-left Facebook friends. Republicans, too, don’t exactly have a gleaming record when it comes to corruption or moral responsibility (see: Watergate, Oliver North, the War on Drugs), so unyielding loyalty to that party is equally baffling to me.

Political team preferences aside, it’s the hate and ignorance from many on social media that I’d like to focus on here. It’s so easy to hate the other side when you dehumanize them and fail (or refuse) to understand their points of view. This is especially apparent on the internet, where memes, falsified data and pseudo-intellectual tweets and articles are used to mercilessly tarnish the reputations and general perceptions of liberals and conservatives alike. Well, as the good book says, let he who is without sin (of posting Buzzfeed or Breitbart rubbish) cast the first stone, and cast them I shall.

The blanket designations (racists, sexists, homophobes, raging jingoists and anti-Semites) of voters who leaned toward Trump do tell some of the story, no doubt, but only at the most superficial level. How much have you read up on the plight of coal workers and those in other industries who are losing their jobs and livelihoods because of the left’s agenda concerning climate change? Have you read the studies chronicling the increasing view working class white males have of themselves as the minority in this nation, the blame for many of society’s problems being placed squarely on their shoulders? Are you aware that many — white, black and brown — are tired of corruption, superficiality and elitism in politics and looked towards a candidate who (allegedly) represented the antithesis of those things?

Many have made zero effort to understand or even glance at these issues; fearful, perhaps, that seeing the other side as anything less than hateful bigots or fantastical boogeymen would invalidate their membership to Team Democrat. Does a vote for Trump mean racial issues were overlooked or not prioritized compared to other issues? Yes, it does, but one must not jump to conclusions that people casting said votes are Cro-Magnon degenerates who must have a near indescribable hatred towards everyone who isn’t white, male and straight.

Ignorance of structural issues, fear and the perceived need to look out for one’s own group contributed to these votes as well, and though it may seem like it at times, apathy towards other groups does not automatically signal active hatred for those groups. You don’t have to agree that these reasons are acceptable or justifiable (Lord knows I don’t), but they might allow you to see Trump supporters as something more than primal animals lacking in morals and conscience.

It’s so easy to hate the other side when you dehumanize them and fail (or refuse) to understand their points of view.

Liberals are sore losers and annoying crybabies, yeah? Perhaps. I mean, that’s what all those memes and Daily Caller posts are saying, right? But maybe if you took the time to learn about the history of structural racism and violence in this country, you’d care a little bit more.

Maybe if you took 10 minutes to put yourselves in the shoes of LGBTQ folks, people who have made so much progress in the past few decades only to face a VP who actively legislates against their people’s rights, you’d be a little more understanding. Maybe if you looked at the other reasons immigrants come here besides the age-old myth of them “stealing our jobs,” you’d be a little more empathetic.

Again, you don’t have to agree with these points, but if you took some time to understand why people feel this way, why the protests and outcry and talk of dark days are occurring, you might not write off all liberals as whining infants who cry until they get their way. At the very least, maybe you’d be a little more informed.

I am by no means an enlightened individual nor am I a political genius, but I do think I have a knack for decent arguments. And as anyone who made it through high school should know, the first and most effective strategy for argumentation is researching and understanding your opponent’s views. I am not here to tell you all to stop bickering, fighting, arguing or disagreeing with the fundamental beliefs of others; I’m telling you to do it like an intelligent person.

Branch out from your (conservative/liberal) echo chamber, from those Twitter accounts and blog sites, and see what the other side thinks. It will likely piss you off, it will likely offend you, but once you get past those reactionary feelings, maybe you can look at it from their vantage point. When you look at it from their vantage point, you can still disagree, but now you have more of a reason to disagree than simply, “They’re a Republican/Democrat.” When you can do that, then debate — real debate, not just slinging insults at each other — can happen, and from that, progress may be achieved.

Use your brain. Use your resources. Figure out why you disagree with or dislike another before disagreeing with or disliking them. If you truly want peace, unity and cooperation like you all supposedly do, then learning and understanding is the first step you can take.

Zach Morgan wants you to step outside of your positive feedback loop and actually work to understand the other side.

From the article: “Are you aware that many — white, black and brown — are tired of corruption, superficiality and elitism in politics and looked towards a candidate who (allegedly) represented the antithesis of those things?” As your observation makes painfully clear, you omitted one salient attribute characterizing (not all) of Trump voters — they are ignorant of (or unintelligent; or both) the consequences of their voting decisions. A democratic election system cannot work if the electorate (or a substantial subset thereof) lacks the capacity for rational thought. And voting a person who is believed to represent the “antithesis” of… Read more »

It’s easy to tell the good guys from the bad guys:
The bad guys form a mob and censor the free speech of the good guys.
Watch the mob when Ben Shapiro comes to campus just to talk.

Or threaten to prosecute their political opposition. Welcome back to Wiemar on the eve of its collapse at the hands of the “good guys”.