UCSB’s road to the NCAA National Tournament was precarious after dropping the previous weekend’s match versus UC Riverside in which the second-to-last team in the Big West captured just its third conference win of the season. 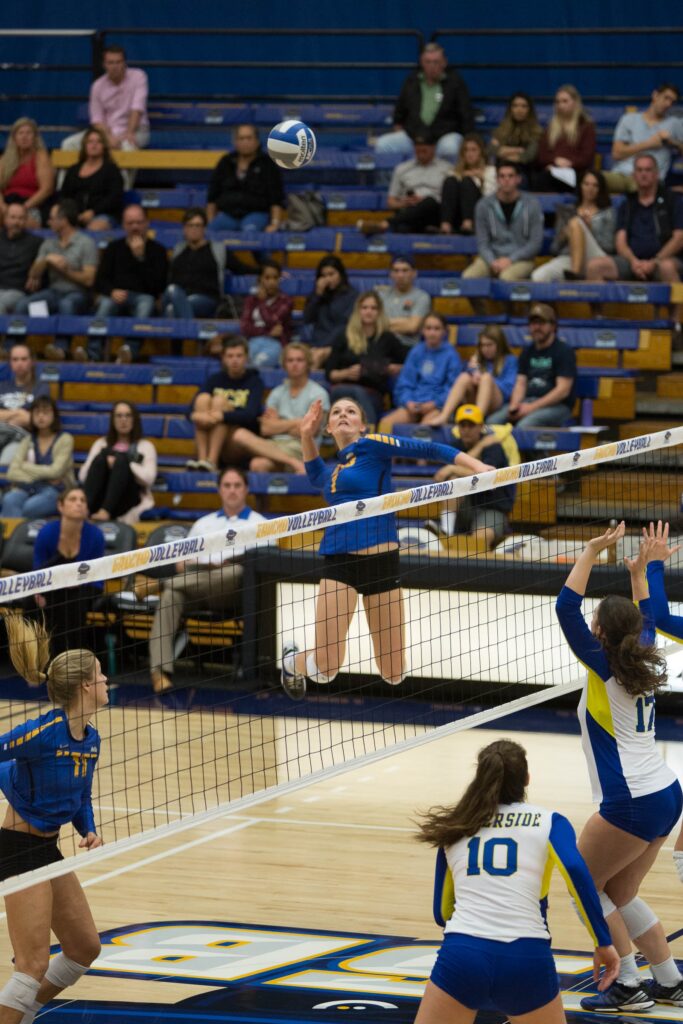 For a team on the cusp of the national playoff picture, the loss was a near deal breaker, but a win over the 14th-ranked Rainbow Wahine would have put the selection committee in a difficult position to be sure.

The Gauchos were well aware of the opportunity before them and came out firing in the first set, out-hitting Hawaii .395 to .256. Hawaii found an early lead behind two service aces from senior opposite hitter Nikki Taylor, and was able to control the early portion of the set, eventually leading 17-11.

A timeout from Head Coach Nicole Lantagne Welch would make all the difference, however, as the Gauchos would follow the stoppage with a 14-4 run to win the set.

The final push, an 8-1 drubbing of the Rainbow Wahine, was spearheaded by the service work of outside hitter Lindsey Ruddins; the redshirt freshman had two service aces over the stretch, as well as an assist to redshirt freshman setter Hannah Juley, who would rack up assists of her own on half of UCSB’s final eight points.

Freshman outside hitter Chloe Allen would also collect three kills over the stretch, finishing with 10 in the match, good for second most on the Gauchos and her third-highest output for the season.

UCSB played the Rainbow Wahine to a 6-3 advantage in the second set, a peak in the Gauchos’ hopes for the evening. An eight-point Hawaii run would follow, and UCSB never posed much of a threat for the remainder of the match.

The third frame saw a similar effort from the Gauchos to begin the set, but another devastating 10-2 Hawaii run midway through, pushing the lead to 20-13, was again UCSB’s downfall.

The Gauchos weren’t able to put up much of a fight in the fourth game, never holding a lead on the way to finishing with only 10 points

Lindsey Ruddins was still very productive for the Gauchos, accumulating 21 kills, albeit on a whopping 68 attempts (.235 kill percentage), along with three service aces and six digs.

She fell just short of Hawaii’s Nikki Taylor, who concluded Saturday’s match with a double-double on 22 kills (.405 kill percentage) and 11 digs, adding three service aces for good measure. Both were far more prolific than their averages, 4.59 kills per set for Taylor and 4.13 for Ruddins.

The difference in Saturday’s match was Taylor’s support compared to Ruddins’, as three other rainbow Wahine finished with at least eight kills, while only two other Gauchos were able to accomplish the feat. Furthermore, four Gauchos finished with negative hitting percentages, all of whom participated in at least three sets.

Freshman Rainbow Wahine setter Norene Iosia slightly outplayed UCSB’s Hannah Juley, finishing with 40 assists as opposed to Juley’s 34, and completing a double-double with 15 digs while Juley could only get to four of her own.

Emilia Petrachi, the sophomore who’s arguably the Big West’s best libero, paced all players by 10 digs with 25 on the night, though only one other Gaucho was able to top double-digit digs and three members of the Hawaii team were able to do so.

Hawaii will look to move up from their 14th position in the national rankings after sweeping its weekend contests against the Gauchos and the Cal Poly Mustangs.

UCSB will have one opportunity to conclude their season on a high note despite the sting of missing out on the playoffs with a home match against UC Irvine on Wednesday, Nov. 23 at 5 p.m.