The Daily Nexus
Sports
Gauchos Travel To Seattle in Search of a Second Straight Win
November 18, 2016 at 5:50 pm by Spencer Ault

It’s hard to truly determine a trend from only a couple games. That said, if the early offensive pattern for both Seattle University and UCSB holds true, spectators can expect to see a lot of three-pointers when the two teams meet in Seattle on Friday night. 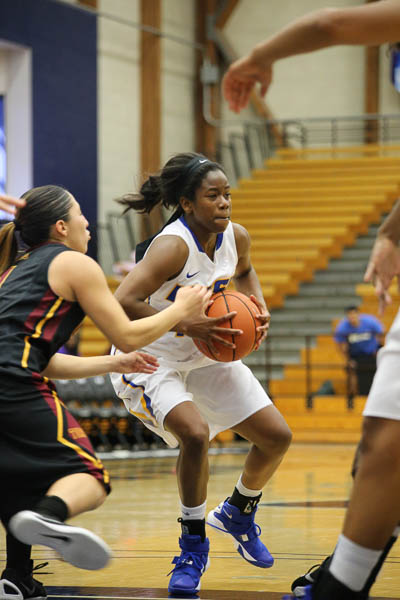 It is, of course, very early in the season, but all signs point to the matchup as being one likely to be decided from beyond the arc.

“(Seattle) shoots the three a lot,” UCSB head coach Bonnie Henrickson said. “Their numbers are just really high. They have one girl who’s taken 19 threes in two games and they’ve taken only eight free throws, which is really indicative of a lot of catch-and-shoot from three.”

The bulk of Seattle’s offensive production, including its production from three-point land, comes from just two players: senior wing Kaylee Best and senior wing Alexis Montgomery. Best, a 5’8” senior wing, is shooting over 47 percent from long range and is averaging a Western Athletic Conference-high 21.5 points per game.

“We just need to limit (Best’s) touches,” Hendrickson said. “We need to execute ball-side deny, we need to know their personnel and where she is on the floor, and we need to keep our hands up on defense. The main thing is just going to be keeping the ball out of her hands.”

Fellow Montgomery has started off on fire, shooting 50 percent from three and scoring 14.5 points per game.

Stopping Best and Montgomery, or at least keeping them relatively quiet, is UCSB’s best chance at forcing the Redhawk offense to a halt. Only one other Seattle player — senior guard Claire Metoyer — is averaging over five points per game. If the Gauchos can get the ball out of Best or Montgomery’s hands, they’ll have succeeded in getting the Redhawks out of their offensive comfort zone.

In their two regular-season games, plus their exhibition game against Cal State Los Angeles, the Gauchos have shown a definite affinity for the three, but Hendrickson isn’t planning on making that a focus on Friday night.

“Our advantage is inside, so we’ll focus on getting high percentage touches there,” Hendrickson said. “If we can do that consistently, the defense will collapse and we can kick it outside. If we can score a number of different ways it really puts pressure on the defense.”

UCSB Redshirt junior Drew Edelman will be the key to success of Hendrickson’s game plan. The 6’4” center put up 16 points, all in the second half, to push the Gauchos past Pepperdine on Tuesday and will be the player point guards senior Onome Jemerigbe and junior Drea Toler will look to funnel the ball down low to.

Should Hendrickson’s vision come true, and the Gauchos succeed in forcing the Redhawk defense to collapse, there will be several beneficiaries among the UCSB offense. Sophomore wing Coco Miller went off for 24 points, including five threes, against Pepperdine, and, along with guards junior Makala Roper and sophomore Sarah Porter, will be eager for kick-outs from Edelman and the other Gaucho bigs.

Santa Barbara takes on Seattle University at 7 p.m. on Friday, November 18 at KeyArena.