The Daily Nexus
Sports
UCSB Earns First Victory in Home Opener Behind Miller’s 24 Points
November 17, 2016 at 5:09 am by Sean White

It was a rewarding ending at the Thunderdome for the UCSB women’s basketball team Tuesday night as it defeated Pepperdine 66-57 in its home opener. The Gauchos’ first win of the season makes them 1-1, while Pepperdine remained winless and is now 0-2. 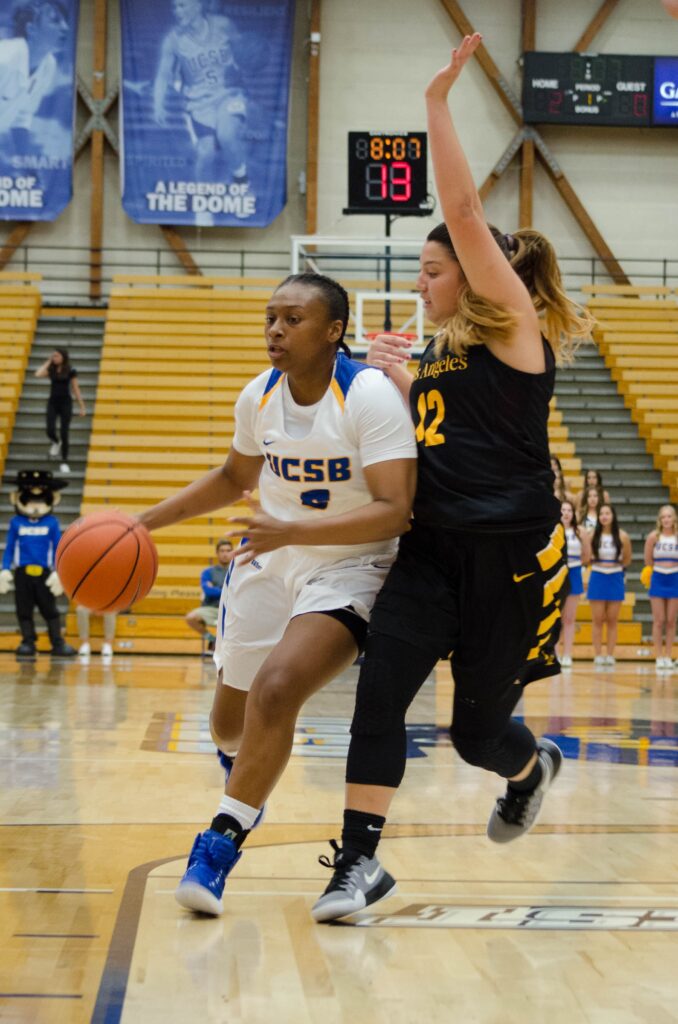 “Coach Bonnie always says [teams] can’t take away everything,” Miller said. “So when they take away the big, my shot is open on the three-point line. They really pressured [Drew] on the inside, so I had a lot of open shots. On my job description list is knock down open shots.”

Miller capitalized on open shot opportunities, draining 5-of-13 from long distance. Nearly all of her field goals in the game were from three-point distance except one jumpshot as she ended the game 6-15 from the field.

Redshirt junior forward Drew Edelman emerged big in the second half. After no shot attempts in the first half due to two fouls limiting her to play for just four minutes, Edelman recorded all 12 of her field goal attempts in the game’s last 20 minutes. Her domination of the paint led to her finishing with 16 points on 8-12 shooting to go with five rebounds and one block.

“It was definitely exciting to not be in foul trouble anymore,” Edelman said. “My teammates are great about throwing me the ball. When they kick it in and I’m getting double teamed, I can kick it out and I know that Coco will knock down an open shot. It’s definitely a good thing we have going.”

The plan to penetrate the paint to open up shots on the perimeter worked out the gates as Miller drained a three to give UCSB its first points of the games. The deep make ignite the Gauchos’ 5-0 run to start the first quarter.

By the 7:01 mark of the period, Pepperdine had earned its first lead, responding with a 9-0 run of its own.

Leading the Waves’ scoring charge were their guard tandem of redshirt freshman Sydney Bordonaro and senior Allie Green. Hitting her first three-pointer of the game during the run, Bordonaro scored five points to contribute to her team-high total of 15 points on 6-12 overall and 3-5 shooting from beyond the arc.

Green scored the other four during the scoring stretch, ending the game with 12 points on 4-11 shooting.

UCSB gained its first double-figure lead of 21-11 during its 10-0 run that carried over from the end of the first to the second period. It earned its largest lead of 14 points at 27-13 as a result of a made layup by redshirt junior point guard Drea Toler.

UCSB pressured the Waves’ offense into turning the ball over a total of 22 times, but was inefficient in capitalizing on its opportunities.

Despite shooting 6-16  from three-point range in the first two quarters, the Gauchos struggled inside the three-point line and had issues converting on their forced turnovers, going 3-18 on layups in the first half.

The inconsistencies in transition ultimately led to Santa Barbara’s being held scoreless in the remaining 5:47 of the first half.

Pepperdine embarked on a 9-0 run to end the first half, trimming the Gauchos’ lead to 27-22 at halftime.

The first tie of the game occurred at the 7:42 mark of the third quarter as Pepperdine’s Green had an open left lane to the basket, knotting the game at 29-29.

Helping improve the Gauchos’ 24.3 field goal percentage was their improvements in shot selection in the second half.

Providing a balance to UCSB’s three-point attack was its emphasis on getting the ball to the paint in the second half. It attempted just eight three-point attempts, finishing the game 8-24 from downtown, and displayed its commitment to Edelman early.

The plan to feed Edelman in the paint was beneficial as she ended the third quarter with 10 points on 4-7 shooting.

A three-pointer by Porter just 30 seconds into the fourth quarter regained a double-figure lead for UCSB, building its lead to 45-34.

Scoring eight of her 12 total points in the fourth quarter of the game was Pepperdine’s sophomore forward Yasmine Robinson-Bacote. Able to convert on an and-1 opportunity Robinson-Bacote after a successful drive to the hoop, bringing the Waves’ deficit to 51-44.

A steal followed by a go-ahead layup by sophomore guard Paige Fecske allowed the Waves to stay in contention, trailing 58-51, as they called a timeout after the field goal with 51 seconds remaining.

In spite of Pepperdine closing in on their lead, the Gauchos managed to secure their first victory at the free throw line.

UCSB kept its poise at the line, making 13-21 free throws in the fourth quarter alone as it ended 16-25. Miller and senior point guard Onome Jemerigbe led UCSB in its foul shooting, making a combined 13-18 from the line.

An arid pass out of bounds by Bordonaro followed by a turnover in Pepperdine’s final two possessions of the game allowed UCSB to milk the clock in the game’s remaining 12 seconds, finalizing UCSB’s 66-57 win.

The Gauchos will hope to maintain their momentum on the road at Seattle University tonight at 7 p.m.