Amid a tumultuous time in the US, many music lovers found solace in the fifth-annual Camp Flog Gnaw Carnival, founded by Tyler, The Creator. The carnival has exponentially grown since its origin in 2012. Carnival-goers were surrounded by a plethora of activities including rides, games, and of course, live music. This year’s lineup was arguably the best yet, featuring an array of artists such as A$AP Rocky, Anderson .Paak, Erykah Badu, and Chance the Rapper. 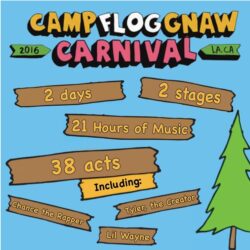 Day one was kicked off with a soulful performance by Phony Ppl, a Brooklyn-based band that exhibits a sound consisting of vintage funk, soul, R&B, and hip-hop. Two hours after the group’s set, Kamasi Washington performed on the same stage. Washington’s set was packed with exhilarating and euphoric jazz instrumentation, highlighted by the breathtaking talent of his band. At 4:30 pm, LA producer, TOKiMONSTA, took the stage. By this point, the carnival was in full effect. Beach balls began to dance around the sun-saturated sky as TOKiMONSTA brought out two surprise guests: Isaiah Rashad and Joey Purp. Rashad’s appearance was still in the wake of hype surrounding his debut LP, The Sun’s Tirade, and Joey Purp boosted the crowd’s dynamism with a performance of his quirky single “Girls.”

A highly anticipated performance of Flog Gnaw 2016 was that of the Grammy-nominated neo-soul group, The Internet. Following a brief technical delay, vocalist Syd tha Kyd exploded onto the stage as the band played their hit song “Get Away.”  Tyler, The Creator made an appearance towards the end of the group’s set, then returned off stage to resume dancing. Chicago native Chance the Rapper followed with a mix of high-energy hip-hop and gospel-laced soul music complemented by exhilarating fire and spark displays onstage.

A$AP Rocky had his own slot on Saturday. Rocky performed a variety of songs from old and recent projects, even bringing out fellow members of A$AP Mob such as A$AP Ferg and Twelvie. Rocky’s performance was a carnival favorite as he surfed the crowd and provoked mosh pits at various points throughout his show.

Tyler, The Creator kept the crowd on its toes by repeatedly switching from old to to new songs prematurely. In addition to his own tracks, Tyler brought out Rocky to perform “Telephone Calls,” a single from the recent A$AP Mob album, Cozy Tapes: Vol. 1 Friends. Lil’ Wayne capped off the night for the majority of attendees whilst Canadian producer KAYTRANADA headlined the smaller Flog stage.

Less than 12 hours after Wayne’s performance, doors opened for day two of Camp Flog Gnaw.  Sunday was equally as saturated with talent as the first. Vince Staples came out for Taco’s set to perform “Norf Norf.” Delirium 2016 acts Flatbush Zombies and YG both made appearances at the carnival following their UCSB Halloween special. After Flatbush was New York rapper [and chef] Action Bronson, who showered the crowd with culinary raps.

On the Camp stage, Anderson .Paak and his band, The Free Nationals, continued to assert themselves as one of the country’s most exciting and energetic acts. Paak’s sexy, soul-inspired hip-hop and singing flooded the atmosphere of Exposition Park with funky beats and raspy hooks. Following Paak was the legendary Erykah Badu, one of Tyler’s life-long idols. Badu performed a culmination of songs, many of which derived from her critically acclaimed album Baduizm, which turns 20 years old in 2017. Badu’s set began and ended approximately 30 minutes behind schedule; at this point, suspense surrounding the TBA slot in the festival’s lineup reached it’s peak.

Previous surprise performers included artists like Kanye West, so expectations were quite high. The slot was initially rumored to be attributed to Frank Ocean, though many were either pleased or disappointed to discover that Earl Sweatshirt would actually be performing with his once-estranged friend, Tyler, The Creator, under the stage name of EarlWolf. The duo performed Odd Future classics such as “Orange Juice” and “Couch,” as well as solo work. Headlining day two was Schoolboy Q on the Camp stage and Death Grips on the Flog stage. As fans flooded Q’s show Tyler headed out to the carnival grounds to ride rides and take photos with fans.

Ultimately, Tyler, The Creator exceeded the expectations of many music-lovers and critics and established his illustrious carnival as a staple of the West Coast festival scene. In a political and social climate like this, it’s delightful to see people of all kinds come together and collectively enjoy the creativity of others.

The writer really captured the experience of the concert!