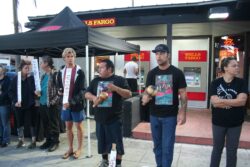 “Standing Rock is here; it’s not just over there. We do not have to be there physically to feel their power. It’s in your heart,” Marcus Lopez Jr., UCSB alumnus, said on Tuesday.

The group, along with many locals, have been resisting the construction of the Dakota Access Pipeline (DAPL), a $3.8 billion project which federal regulators approved in July.

On Tuesday, the group organized a demonstration in front of the Wells Fargo in Isla Vista, one of 17 United States banks financially supporting the pipeline’s construction. 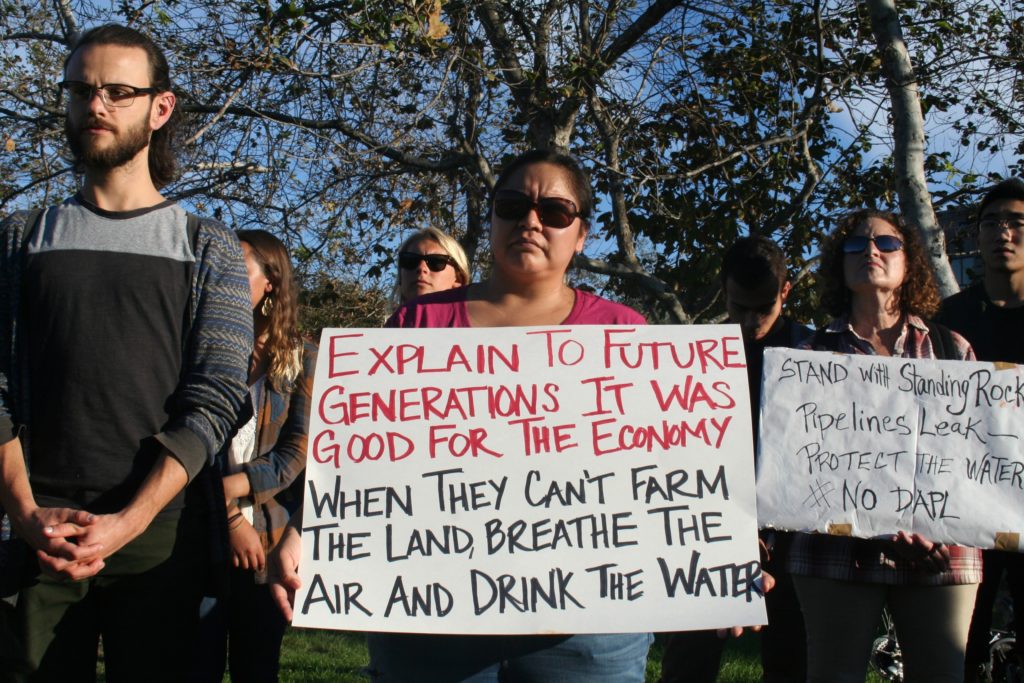 The structure would stretch approximately 1,172 miles from North Dakota to Illinois to carry half a million barrels of oil across the country, but the Standing Rock Sioux tribe and others are concerned that it will harm tribal artifacts and water supplies from the Missouri River.

Marcus V. Lopez Sr., chairman of the Barbareno Chumash Council, welcomed the crowd into a circle, greeting them with a traditional sage-burning along with native songs and prayer.

“This gives me hope, just knowing there’s this many people here that are willing to stand and make a stand for us,” Chumash member Pacomio Sun said. “It feels like, on a personal level, you are all doing that for me, which is really pretty heartwarming.” 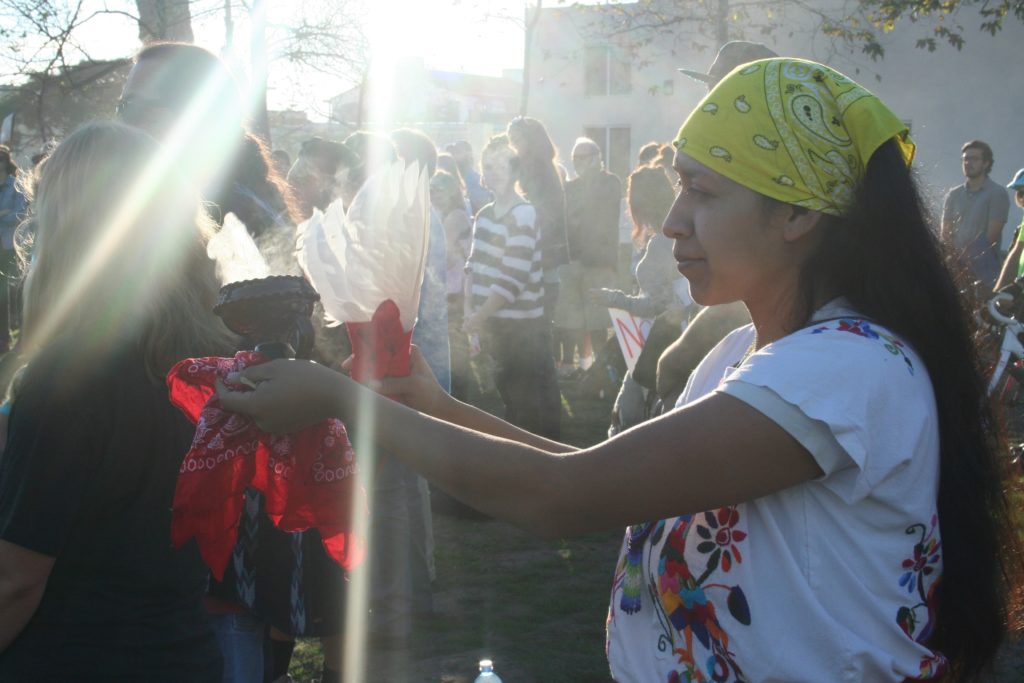 Protesters held up signs that read, “Water is Life!” and, “We can’t drink oil. #NoDAPL.” Another sign read, “Explain to future generations it was good for the economy when they can’t farm the land, breathe the air, and drink the water.”

As the circle formed, various attendees stepped forward to share their perspective on the controversial project. 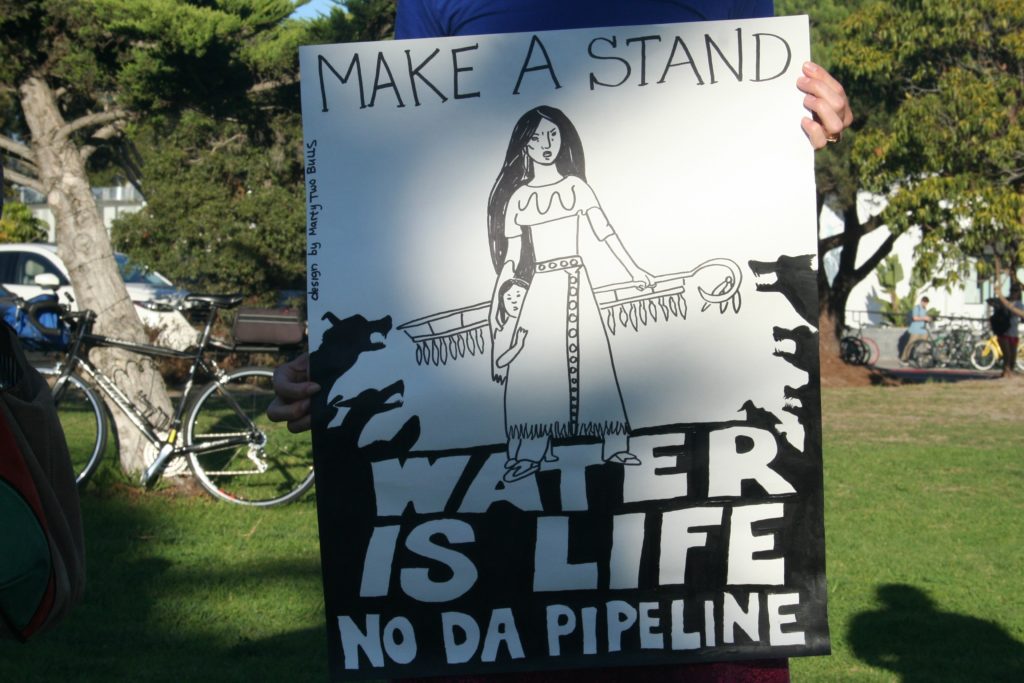 Bob Ornstein of the Tribal Trust Foundation said the gathering was “huge on so many levels” because of its support for human rights, environmental rights and “respect for people’s sacred sites.”

“Each individual has the opportunity to have a positive impact,” he said. “Your voice and the voices of others, it makes for a compelling force and a voice that will not be silenced.”

At the end of the prayer, protesters carried their signs to the Wells Fargo branch on Pardall Road. 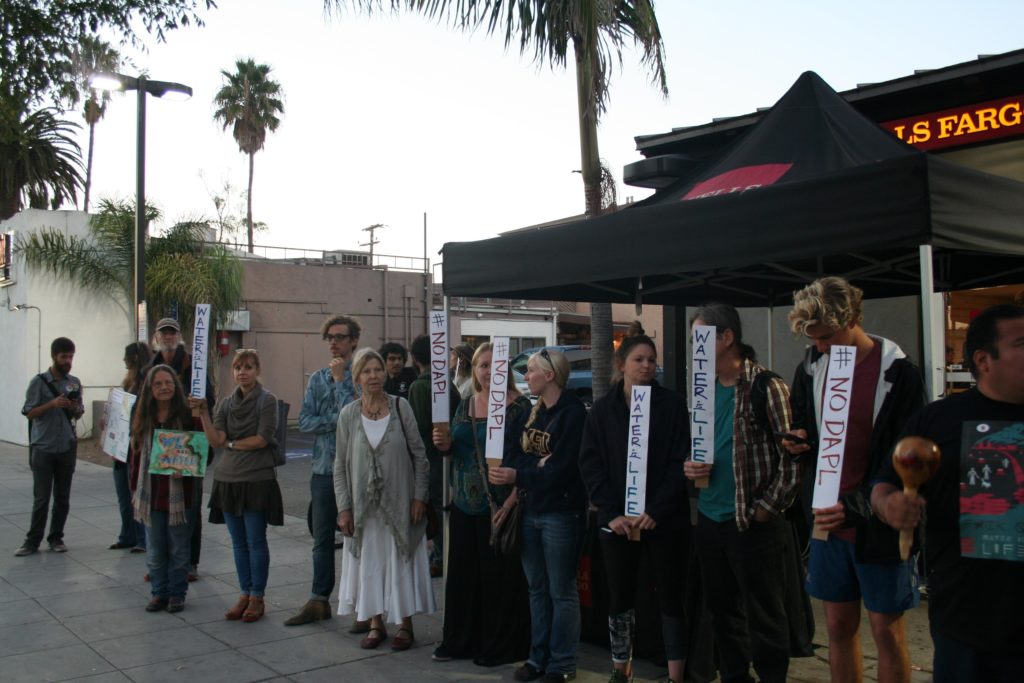 The group chanted “Olé, olé, olé! No Wells Fargo, no Wells Fargo!” urging crowd members to close their accounts with Wells Fargo and divest from other institutions that support the pipeline.

As the crowd dispersed, Lopez Sr. left those in attendance with a personal message. “You give me hope, not the politicians,” he said, adding that the younger generation will step forward, “creating a world where all worlds can fit.”

Two more rallies will take place Saturday at 1 p.m. in front of the Santa Barbara Courthouse and Sunday at a time to be determined in front of Stearns Wharf.