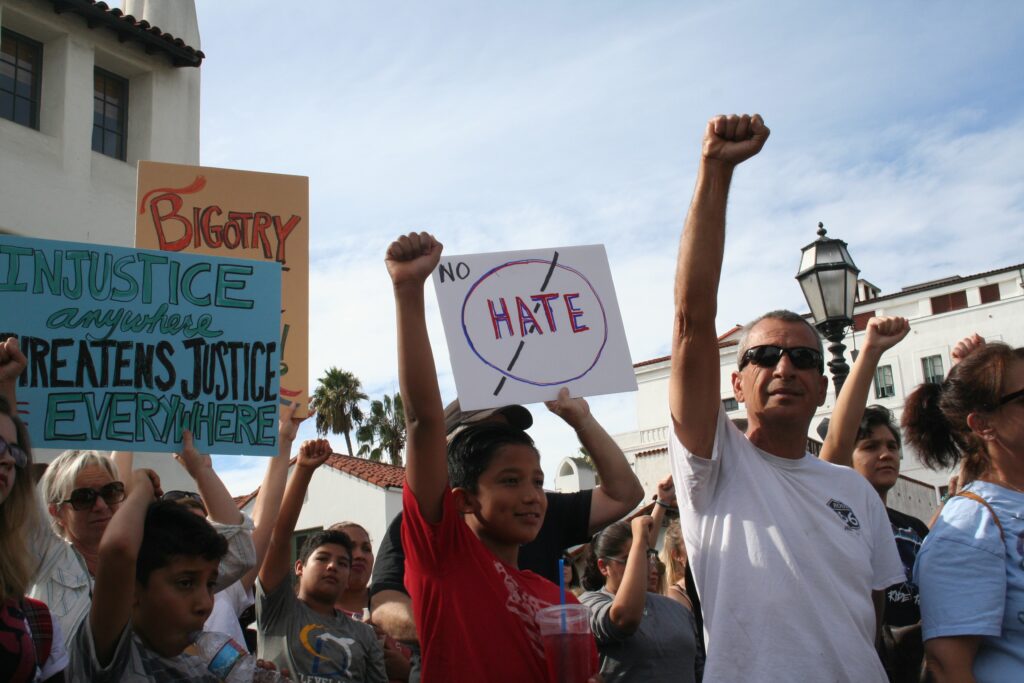 Organized by People Organized for the Defense & Equal Rights of SB Youth (PODER), the protest began at 1 p.m. on Saturday. The starting point of the event was in De La Guerra Plaza, where PODER and fellow speakers were given the chance to express their sentiments about the election. 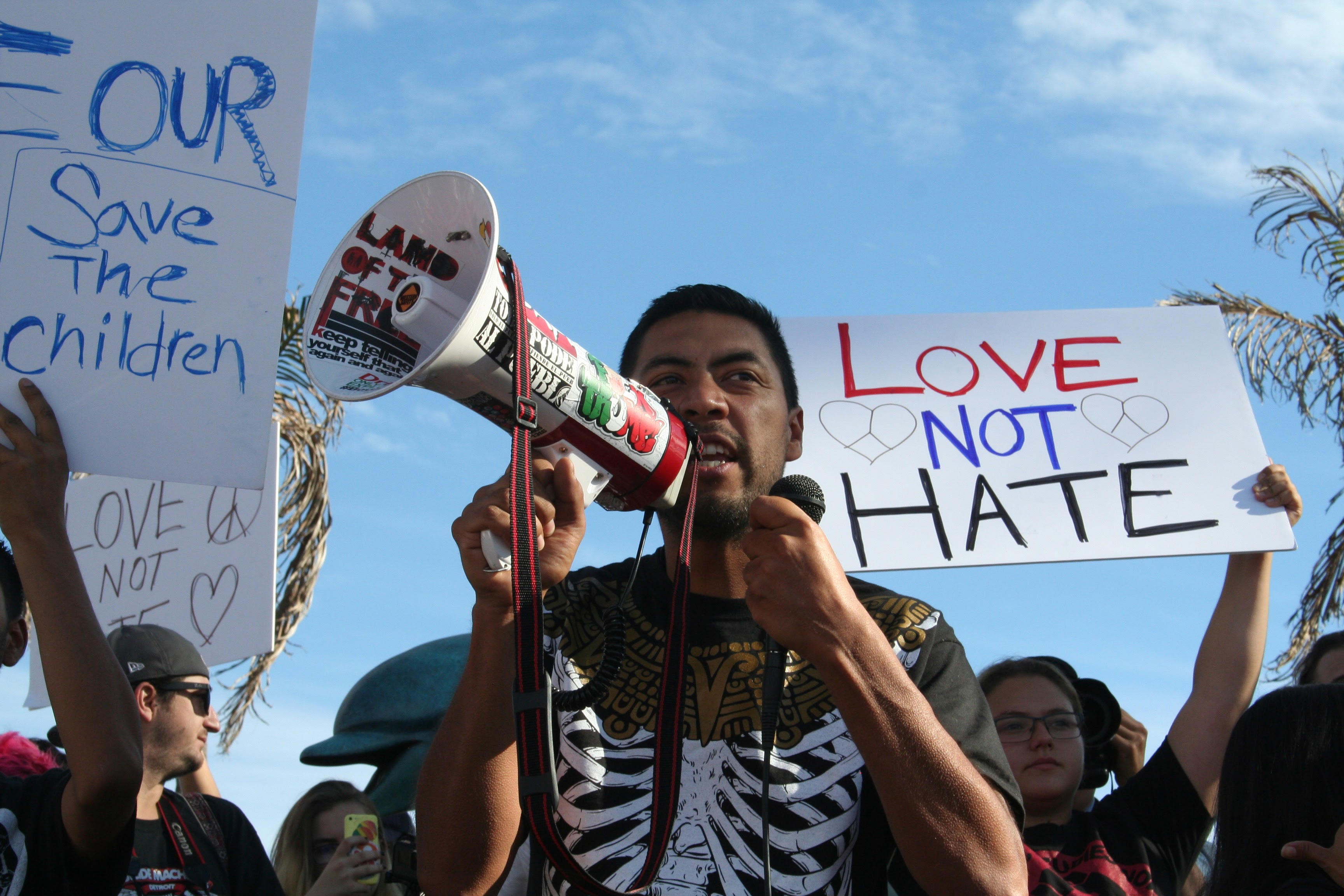 Members of PODER declared from the start that “This is a march, this is not a riot; we will not tolerate any violence or hate speech on our behalf,” intending to put to rest any notions of possible acts of aggression in the midst of protest.

In a statement released prior to the march, PODER said it had no intention of disrupting the Veterans Day parade to take place earlier on Saturday. According to the statement, organizers changed the time of the event so that it would not conflict with the parade.

Referencing hate crimes that occurred in the United States after the election, PODER organizer Candice Perez said, “Even here in Santa Barbara, I have heard so many people say they have been verbally abused and even physically abused.” 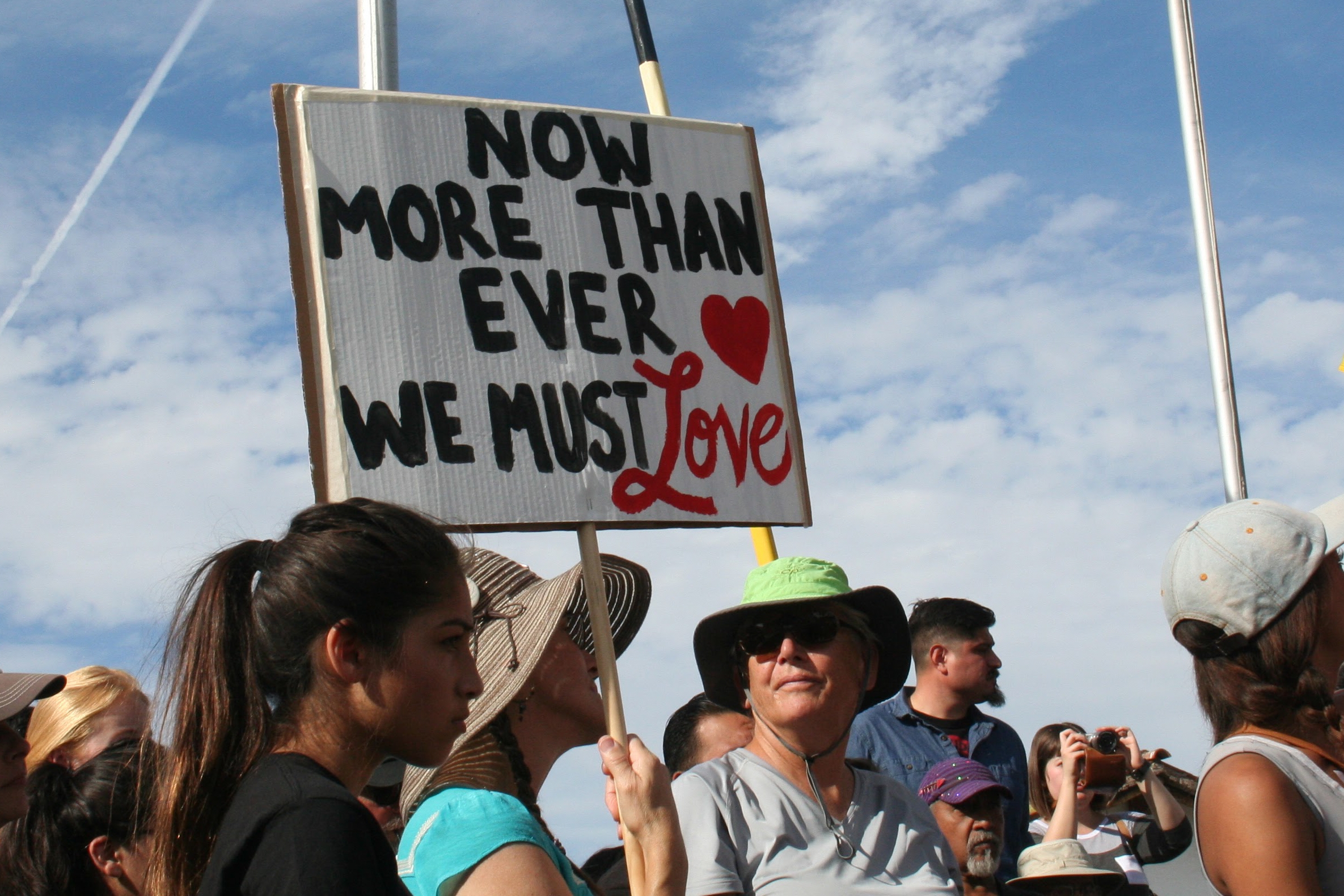 Chumash elder Marcus Lopez blessed the crowd with sage medicine before beginning his speech, which centered around being “protectors of a generation.” He called the crowd to action, encouraging them to “challenge the system.”

Frank Rodriguez, organizer with the Central Coast Alliance United for a Sustainable Economy, was a child when Proposition 187 passed into law in California. The legislation was written to deny public services to undocumented immigrants.

“The fear that we saw in our parents eyes that we’re seeing again today is why I’m so happy to see everyone here today,” he said.

Walking from De La Guerra Plaza to Pershing Park, the protesters overtook the streets with guidance from the police and made themselves heard. As this was a peaceful protest, instead of the seemingly popular “Fuck Donald Trump,” the crowd opted for chants such as “Love Trumps Hate” and “A people united will never be divided.” 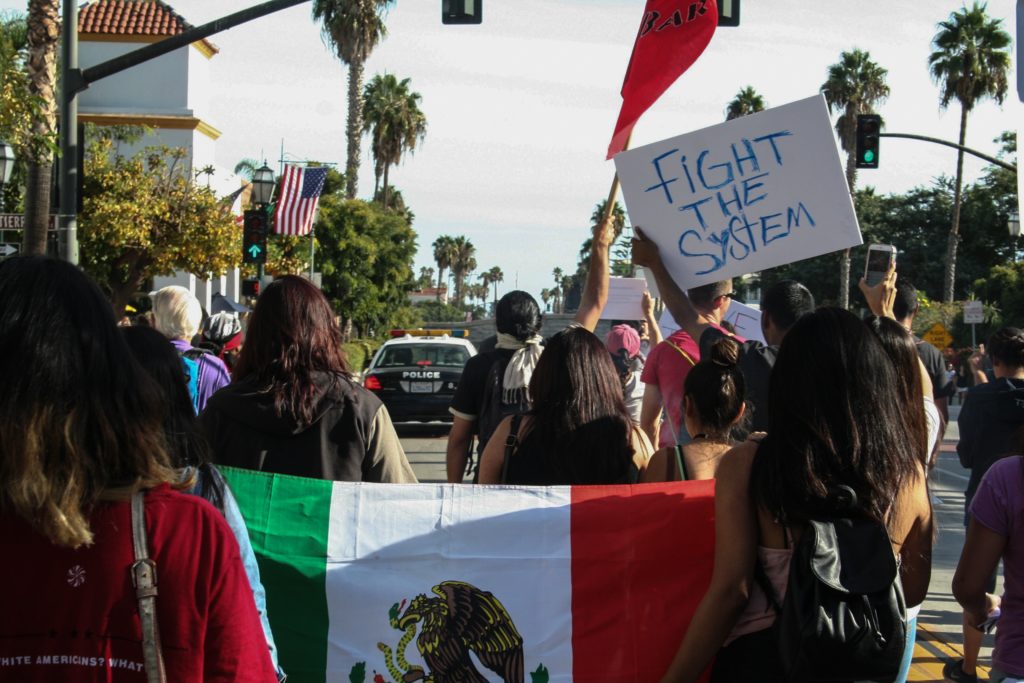 Bystanders watched, filmed and cheered on the crowd as they chanted and marched throughout downtown Santa Barbara; a few onlookers even got emotional in response to the demonstration. Handcrafted signs became Santa Barbara’s skyline for the moment, as protesters proudly displayed phrases like “Bigotry is Not Unity” and “Hate Won’t Make Us Great.”

To close the march, speakers took the stage in Pershing Park to voice their feelings one last time. Following the speeches were traditional Toltec/Aztec prayer dances performed by local danzantes. The danzantes included PODER members, a Chumash man, UCSB students and several locals.

LGBTQ, Mexican and American flags were flown throughout the crowd, intended to celebrate the diversity of America on this Veterans Day weekend.

During the final gathering in Pershing Park, a small group of Trump supporters showed up, upsetting some of the protesters. Trump supporters walked alongside the protest and listened to the speeches given by members of the march, observing the demonstration.

Correction: The closing prayer dances were Toltec/Aztec, not Chumash, and were performed by a mixed group of local dancers.

Yawn. Wishful liberal thinking. Close your eyes, but when you open them he’ll still be President, folks. And he’s going to do everything he said.

First up, the illegals. See ya! Don’t let the cattle bar hit you on the way back to your hell-holes south of the border. Bummer for the democrats next election, looks like that’ll be 2 million illegally registered votes here in CA they’ll be missing. Wonder how many more counties we can tip red?

you know how conservatives always bitch about their right to freedom of speech?yeah these protesters are exercising it. Get over it. The protests in SB have not been violent so far.

Also trump stated he’s going to start deporting illegals WITH VIOLENT CRIMINAL RECORDS. Not just any illegal. Even congress isn’t pushing to deport every illegal here. Your president elect isn’t going to do everything he says, he’s already backing out of his promises. Your got played, sweetie :)

Even the people who voted for him probably don’t think he will do all the things he promised and right on schedule the potentially positive parts of his platform (ex: making health insurance payments deductible) are already disappearing from his website. But at least he isn’t hillary. The country would never have recovered from the levels of complacency and dejection that would have saturated the party if she had won. I am thankful that enough Bernie primary voters, after seeing what could be, have higher standards now and refused to support someone who mocked their dreams and insisted our leader… Read more »

Agreed! And those who complain that Hillary won the popular vote – wrong! Those votes came from fraudulent voters and illegal aliens.

There not going anywhere and there are plenty of citizens willing to take a stand against mass deportations ever happening.

This was not an anti trump protest so much as the democrats getting their shit together after hillary led them off a cliff. Those who voted for hillary in the primary have nothing to complain about, if they want to contribute positively to politics the only thing they are qualified to do now is feel ashamed and apologize. People who supported Bernie in the primary are the smart ones and the future of progressivism.

Amazing the alternate to the press elect will need a Presidential Pardon for crimes committed and these people support her.

There is no better way to celebrate our right to protest and American protection of speech, by joining together with fellow Americans and march in unity; and proudly wave another nation’s flag instead.