The Daily Nexus
Nexustentialism
It's satire, stupid.
Marijuana Legalization Used as Coping Mechanism for Californians Under Trump Presidency
November 9, 2016 at 10:33 am by Jasmine Vaughn and Ariana Marmolejo 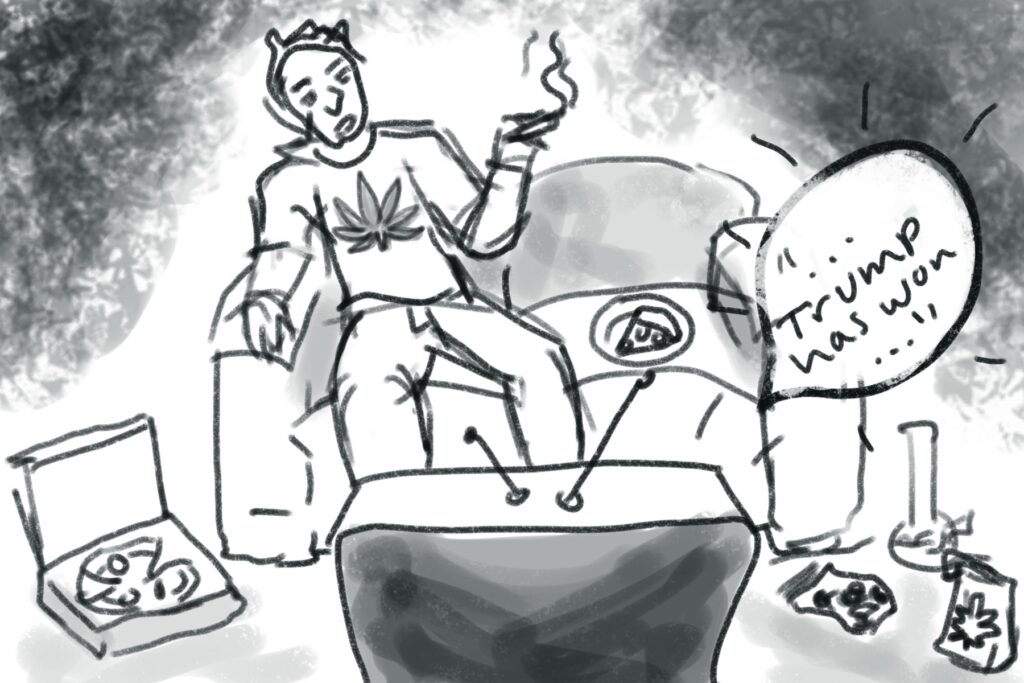 ISLA VISTA, CA – Amidst the dark clouds surrounding election night, a cloud of a different type began to rise above the nerve-wracked streets of I.V.

As news spread about the newly legalized use of recreational marijuana, citizens all over California set down their constantly refreshing screens of election results and picked up their paraphernalia to toke up some devil’s lettuce.

“I mean, at least now I have a way to deal with my impending doom,” Lea Shelly, first-year and owner of a medical marijuana for chronic arthritis, said. “Before this, I was just drinking to calm my anxiety, but this is much more efficient.”

Sales of Mary Jane are already skyrocketing within hours of the news, and dealers are having a tough time keeping up with supply. However, it doesn’t seem like they’re complaining.

“After that law passed, I knew my student loans wouldn’t be a problem anymore,” Steve McPlug said in between counting mad stacks of bills.

One unexpected side effect of the law may be its environmental impact. NASA reports an increasingly large fog spreading over California. Originating in the greater Isla Vista area, the smoke immediately began to spread in all directions, growing denser and more potent. One researcher even described the mysterious fog as “dank.” Other researchers worry about the lasting effects of this fog and expressed that they don’t believe it will dissipate any time soon.

“The data says that the smoke cloud is enough to affect UV ray dissipation in the area. Normally I’d be concerned, but if you can’t beat them, join ‘em,” Richard Stevenson, Ph.D. in environmental studies, said before pulling the biggest bong rip this reporter has ever witnessed.

Jasmine Vaughn is a third-year communication major who injects 420 marijuanas every 69 minutes. Ariana Marmolejo is a second-year theater major who is a huge devil’s lettuce aficionado.