After nearly 1,000 UC Santa Barbara students protested the election of Donald Trump early Wednesday morning, they were joined by Dos Pueblos High School students who walked out of class at noon and headed to Storke Plaza.

Shortly before 12 p.m., a crowd began gathering in front of Storke Tower, looking for direction and organization. A few students took charge of the event, instructing the group to form a circle and maintain order.

They said the rally was “here to hear ya’ll and how you are doing.”

“This is not so much a protest as a way for people to talk and express their concerns. We need to know how to get organized and how to support each other,” one organizer said through a megaphone. 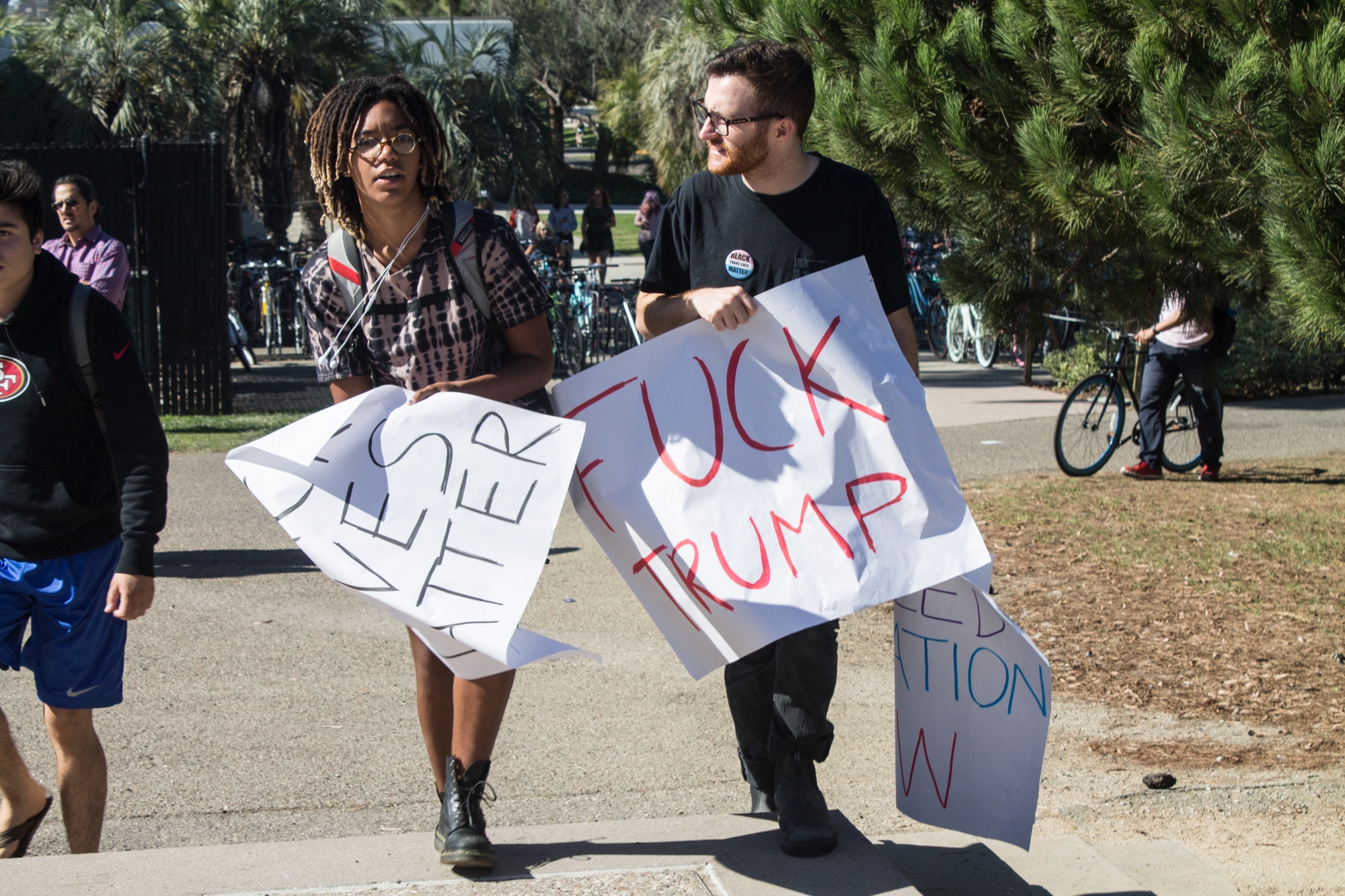 Promptly afterward, organizers called for representatives from student groups to use a loudspeaker and express their concerns in the light of the recent electoral results.

By this time, hundreds had gathered around Storke Tower and a line began forming as students and faculty from various organizations across campus offered resources for any students seeking support and assistance.

Cars beeped and honked and the protesters grew louder and continued their march. Along the way, administrators from DPHS provided the marchers with bottles of water.

California Highway Patrol, aware that DPHS were going to walk out, accompanied the students making sure everyone remained safe.

“Our admin and superintendent supported us,” said Brandy Melendez, a senior at DPHS.

Various impassioned students stood up to share their stories on fear and distress in light of Trump’s election to the Oval Office. 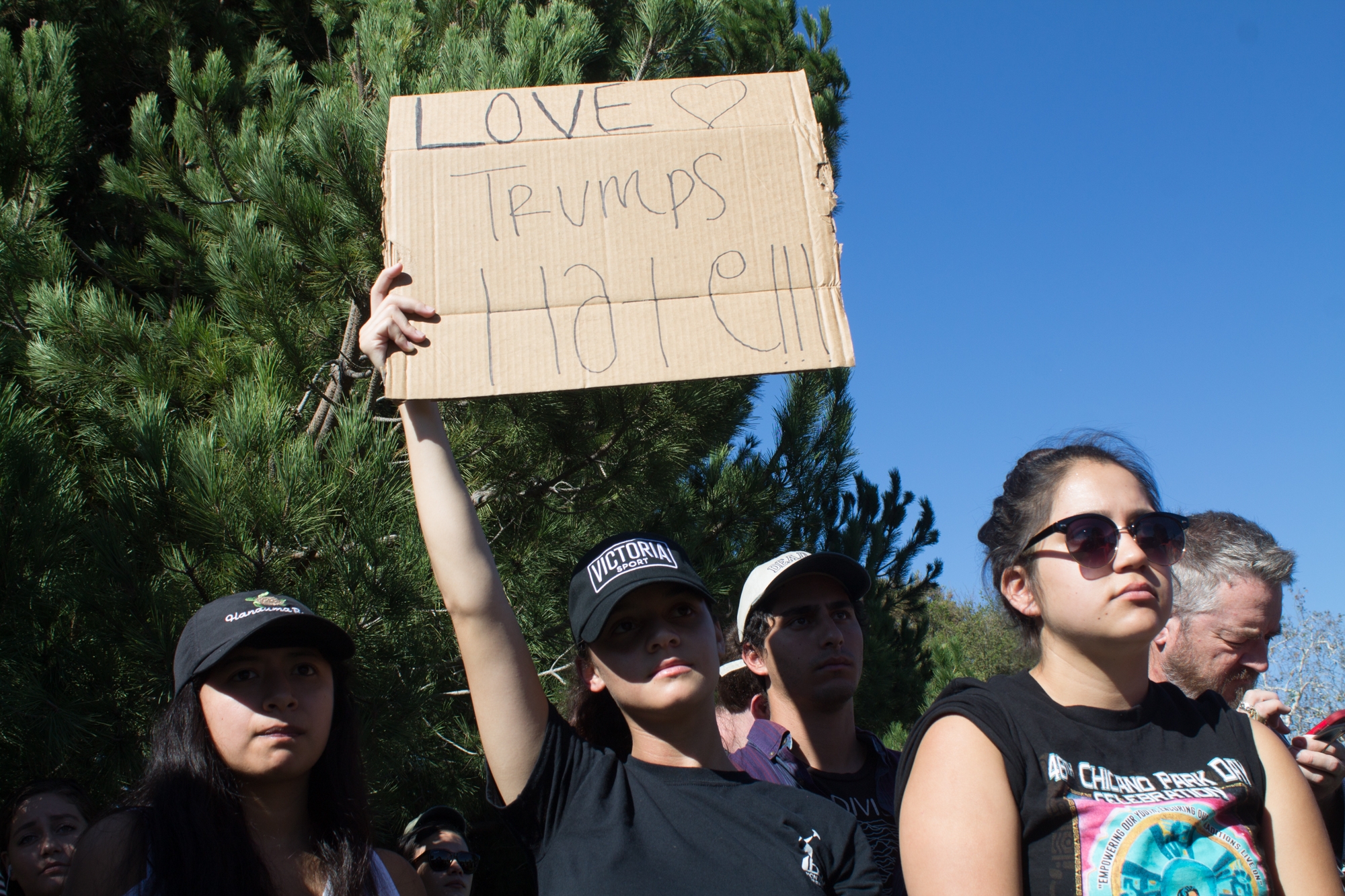 A female student belonging to a minority community also received a similar call from her younger siblings.

“Why are my brothers and sisters calling me to ask if they’re going to be able to go to college?” the student said.

Such stories of direct impact on minorities as a result of Trump’s election brought forth significant emotion in the crowd, many of whom were crying.

Another female first-generation Asian American student said “the fear, anxiety and terror that I’m feeling right now is exactly what my parents left Vietnam for.”

There was a majority of first-generation, immigrant, minority, and LGBTQ community members at the rally, sharing accounts of their immediate concerns. Another female student voiced through tears her fear of belonging to an ethnic minority.

“I am afraid right now for my life,” she said.

Despite emotions running high, there was no shortage of students speaking of maintaining optimism and upholding a united front.

One female student said “we cannot continue to victimize ourselves; we need to use our anguish and our power to lift ourselves and each other up.” A male student countered, “don’t go telling me America is the land of the free and the home of the brave, because I don’t believe that no more.”

“Why are my brothers and sisters calling me to ask if they’re going to be able to go to college?”

People living in apartments along El Colegio Rd. showed support and joined DPHS as they walked toward campus. Others countered the protest by shouting from their windows “Donald Trump.”

DPHS students finally reached Storke Tower at around 1 p.m. and were greeted with cheers. Many of the students arrived with a sigh of relief, saying “we made it.”

The rally lasted exactly two hours before it was formally called to a close, and after a few cheers, the crowd dispersed calmly.

Kelly Hoover, spokesperson for the Santa Barbara County Sheriff’s Office, confirmed there were no arrests the previous night.

“The boisterous crowd chanted anti-Trump sentiments but remained peaceful,” Hoover said. “Sheriff deputies and UCPD officers monitored the crowd to make sure everyone was safe and that no one violated laws or put themselves in danger.”

Dos Pueblos should be a lot less crowded when the illegals get sent home.

Yes, you are absolutely right. It is deplorable that illegals have taken advantage of our overcrowded schools for so long.

Agreed – deport all of these illegal alien freeloaders. Leach off citizen taxpayers and deface our property in return. Absolutely zero sympathy whatsoever. Get these parasites out ASAP. I will admit I have a small degree of sympathy for the kids – like maybe 5%, assuming they aren’t little Cholo fucker vandal punks.

glad I moved to Canada. Much better over here to not have to deal with people like you.

With all these special little snowflakes melting down at UCSB I heard Lake Cachuma is up to 80% capacity again. Looks like Trump just solved yet another problem!

How clever (Not! I stumbled across this “gem” twice now while reading comments on this story in two news stories, Are you that into recycling? Must be so proud. Or perhaps mom is).

How, pray tell oh clever one, do melted flakes manage to flow from UCSB over the mountains and find the near-empty lake.

Stop and think (if unfamiliar with the word, loo it up or ask a UCSB student) prior to repeatedly printing this pathetic attempt at barbed humor. You make yourself the sad brunt of your attempt(s).

I probably agree with you politically, but don’t understand or “get the joke.” Can someone please clarify what this means?

You can’t “get his joke” because there is nothing coherent to get. It is non sequitur posing as clever comment.

The high school only gets paid while children are attending class so lets just sit back & see how long this high school is willing to take a loss so that these children can continue to show a complete lack of respect for Democracy. (Peacefully)

how can you preach democracy when most of what trump says is against the values that democracy created?

High school students have rights to, they can voice their opinions about politics. You’d be surprised about how much they know. The district supported these students in the protest.

I’m shocked that the principal (or vice principal) would condone this and the CHP would assist. These are the kind of kids that will be working in fast food, gardeners, fruit pickers, or a combination of the both. Wait a minute – maybe we need them here after all! … Nah!

Why not actuaries, financial analysts, mathematicians, statisticians, or scientists?

Glad I moved to Canada.