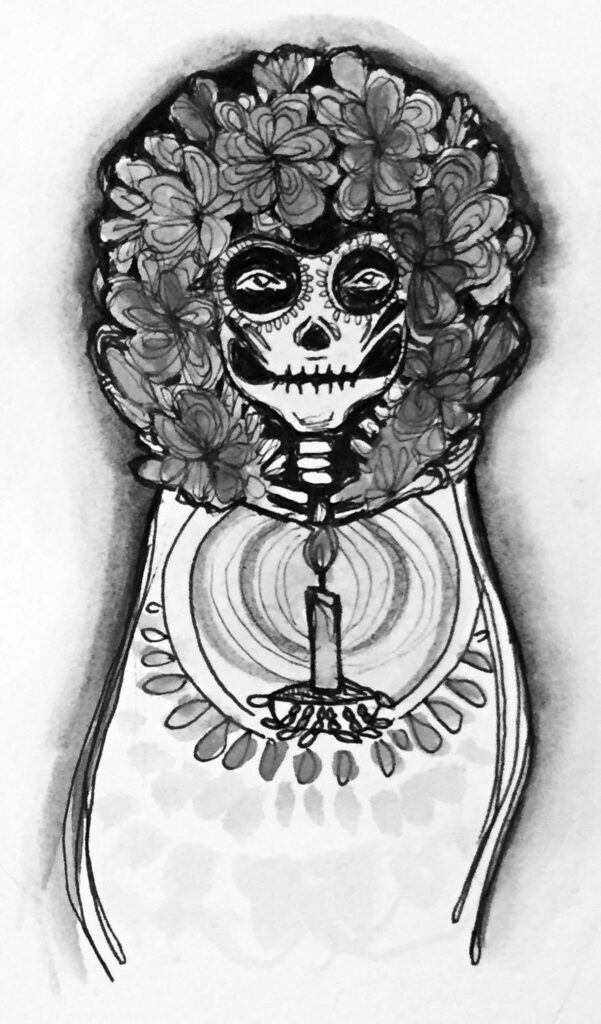 Jessica Maldonado’s grandfather passed away 15 years ago. Being Catholic, her family went to the church to celebrate Día de los Muertos and the life of her grandfather.

“We have the whole dinner. They do an altar for him, and his favorite food was pozolé, so they put pozolé. Most of the time we have pozolé, too,” Maldonado said.

Now a fourth-year sociology major and an educational mentor to Hispanic students, she uses her experience to hold events for the community.

Día de los Muertos is a Mexican holiday celebrating the lives of one’s ancestors. Different from Halloween, the holiday has more religious roots and is focused on remembering the dead.

A main aspect of the holiday is the making of altars, which usually consist of a table with the portraits of the deceased, flowers and sacrificial food. The altars are layered, representing the progression of their lives. Nov. 1 traditionally commemorates children who have died and Nov. 2 commemorates adults.

Multiple organizations and campus groups got together on Tuesday afternoon and held a celebration for Día de los Muertos at the Student Resource Building. The event featured a silent art auction, arts and crafts, a mariachi band, Mexican folk dancers and food.

Students also built altars, but not for the dead. Several groups chose to highlight the focus of their activism on campus.

“We centered it around those four issues and we’re going to have different frames defining what each one is and how C.A.R.E. can help you navigate if you’ve been through something like that,” she said.

“It’s also a way to deal with death in a different way, you know? Like I feel like it’s just kind of, like, instead of being very sad when people pass away, it’s just like, OK, you remember them. It’s a celebration of their life,” said event organizer Nancy Hernandez.

The silent auction sold art pieces donated by UCSB students and faculty. All proceeds went toward the Dream Scholars Fund, a scholarship for undocumented students. Most artwork had a Hispanic theme and ranged from simple watercolor pictures of birds to intricate patterns of skulls.

Attendees could participate in arts and crafts and had the chance to decorate masks and picture frames to take home afterward. There was also face painting, a Día de los Muertos tradition. During Día de los Muertos, only half the face is painted, on either the right or left side.

One of the main goals of the event was to provide a Halloween alternative for Isla Vista. Maldonado said organizers tried “a little bit harder” than last year to advertise to the families in I.V. because their children “don’t have a Halloween.”

“A lot of people party, and [the children] don’t really have places to trick-or-treat,” she said. “So, it’s our little way of bringing them on campus and making them part of our community.”

A version of this story appeared on p.4 of the Thursday, November 3, 2016 print edition of the Daily Nexus.