After experiencing losses in each of their season openers, both the UCSB men’s and women’s swimming teams earned their first victories of the season. Participating in their first dual match of 2016, the Gauchos concluded Saturday with a sweep of the Mustangs. 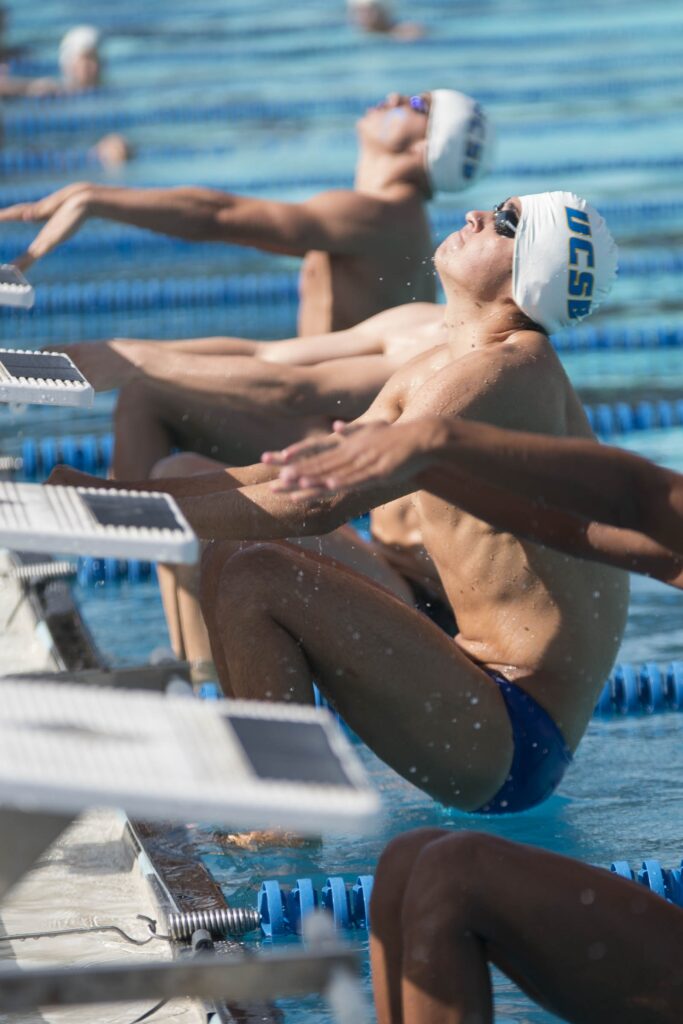 It was a pair of lopsided victories for both UCSB’s men’s and women’s squads. The men ended Saturday with a 161-129 victory over Cal Poly. Meanwhile, the Gauchos’ women’s team defeated the Mustangs by a final score of 171-123.

Despite one loss lingering on the men’s side and three existing for the women when competing individually, the Gauchos are 1-0 in dual meets. Cal Poly’s loss on the road was its first glimpse at dual meet action, leading to its 0-1 record after the loss.

Included in the event were UCSB’s B and C teams, finishing in the order of third and fifth, respectively.

The Gaucho men followed the women’s team in the same event, notching first place with a time of 1:31:15 by their A team made up of junior Billy Mullis, junior Jonathan Panchak, junior Chris Nolan and the lone freshman Riley Ferguson.

It wasn’t until the sixth event of the day that the Mustangs earned a first-place finish. Earning the team’s victory was freshman Paul Rogers in the men’s 200-yard freestyle with a finishing time of 1:40:74.

Nearly edging Cal Poly for this victory was UCSB’s sophomore Eric VanBrocklin as he narrowly trailed Rogers with a second place finish of 1:41:15.

Yet, making up for the runner-up result were the women who represented UCSB in the 100-yard backstroke. A total of three Gauchos placed first through third in the event.

Clocking in at first place was Low. A runner-up in the 100 backstroke at the MPSF Championships last season, Low outswam the rest of the competition for the victory with a time of 55.11.

Not too far behind was Stevens with a finals time of 56.90. Placing in third was freshman Tara Middleton, finishing her backstroke at a time of 58.38.

Earning Cal Poly another first-place finish was the individual victory of freshman Hailey Houck in the women’s 200-yard fly with a time of 2:03:63.

Although both the men and women had a clear path to victory, UCSB’s absence of a diving program served as free points for the Mustangs.

However, helping pave the way for UCSB’s women’s team were the individual efforts of Low, Mikota and Quintana as they finished with two individual wins each.

The Gauchos captured their last two first-place finishes in the women’s 200-yard IM and the women’s 400-yard free relay.

Tallying the best time with a final result of 2:06:40 was junior Alyssa Shew in the 200-yard IM. Almost claiming first place behind her was Quintana with a finishing time of 2:06:68.

Winning ahead of Cal Poly’s relay team by almost more than six seconds, UCSB’s “A” squad of Low, Mikota, sophomore Lilly Helmuth-Malone and freshman Catherine Boles registered their first-place finish with a time of 3:26:78.

Cal Poly’s “A” group came in second place with a final time of 3:32:48. In spite of its men’s 400-yard relay team claiming first in Saturday’s final event, clocking in at 3:07:84, the Mustangs slow start to begin the match set them too far behind to match UCSB’s pace throughout the day.

UCSB will remain at Campus Pool for its second dual meet match of the season. The Gauchos will host UC San Diego this Satuday, Nov. 5 with the first event set to begin at 11 a.m.