These frogs haven’t croaked yet.

The increase in number of the Sierra Nevada yellow-legged frog (Rana sierrae) over the past two decades in Yosemite National Park indicates it has a fighting chance at recovery despite numerous stressors working against it.

Shown above are two endangered Sierra Nevada Yellow-Legged frogs. After a 95 percent decline in population, Knapp and his research team are able to conclude that this frog species is recovering after an 11 percent increase. / Courtesy of Roland Knapp

Based at the Sierra Nevada Aquatic Research Laboratory, UC Santa Barbara biologist Roland Knapp led the research in documenting the frog’s recovery. Combining data with that of U.S. Geological Survey research biologist Gary Fellers two years ago, Knapp and his colleagues have amassed extensive records containing over 7,000 surveys at more than 2,000 sites within Yosemite National Park. Together, they have been studying the populations of Sierra Nevada yellow-legged frogs, an endangered species whose numbers have experienced about 95 percent decline in the Sierra Nevada, including in Yosemite.

In a collaborative effort with Patrick Kleeman of the U.S. Geological Survey, David Miller from Penn State University, Vance Vredenburg from San Francisco State University, Cheryl Briggs from UCSB and Erica Rosenblum from UC Berkeley  published their findings in the Oct. 18,  2016 issue of the Proceedings of the National Academy of Sciences of the United States of America. In their paper, they detailed the 11 percent annual growth rate and seven-fold increase of yellow-legged frog populations since the 20-year study began.

“We’re really excited to see such a profound increase in numbers in a species that has a lot of stressors going against it,” Kleeman said. “There are management actions that are being taken to try and help the chances of the [frog’s recovery] and those appear to help, but it’s really fantastic to see that the frog is actually coming back largely on its own as well.”

Factors contributing to this amphibian’s decline include pesticides and non-native fish, the latter of which has negatively impacted population numbers since as early as a century ago. A more recent stressor introduced about 45 years ago is the infectious and often fatal fungal disease, chytridiomycosis — a source of declining global populations for 30 percent of amphibian species around the world.

Given that these stressors caused the original decline — and are still present in the frog population — has made the yellow-legged frogs’ recovery even more significant within the science community.

“Many other species and populations of species are in serious decline, so finding that this highly endangered frog has actually — following a very severe decline — begun recovering and recovering quite dramatically is really important information for those of us trying to recover this species. Because it indicates that for some of these amphibians, recovery is possible,” Knapp said.

Factors linked to the frogs’ recovery are policies instituted by Yosemite National Park 25 years ago ceasing the stocking of non-native fish. This allowed for some habitats to revert to their original fishless conditions so that the frogs could recolonize them.

The chytrid fungus has lessened its impact on populations as well. According to Kleeman, time is a significant cause in the frogs gradually overcoming this particular stressor.

“One thing working in [the frogs’] favor is that [they’ve] been exposed to this fungus for quite some time, probably since at least the early 1970s. We don’t know exactly the mechanism of how they’re defeating the chytrid fungus currently, but it’s given them the chance to overcome it over time and basically either build up resistance [to it], or they may have otherwise inherently had that resistance all along,” Kleeman said. 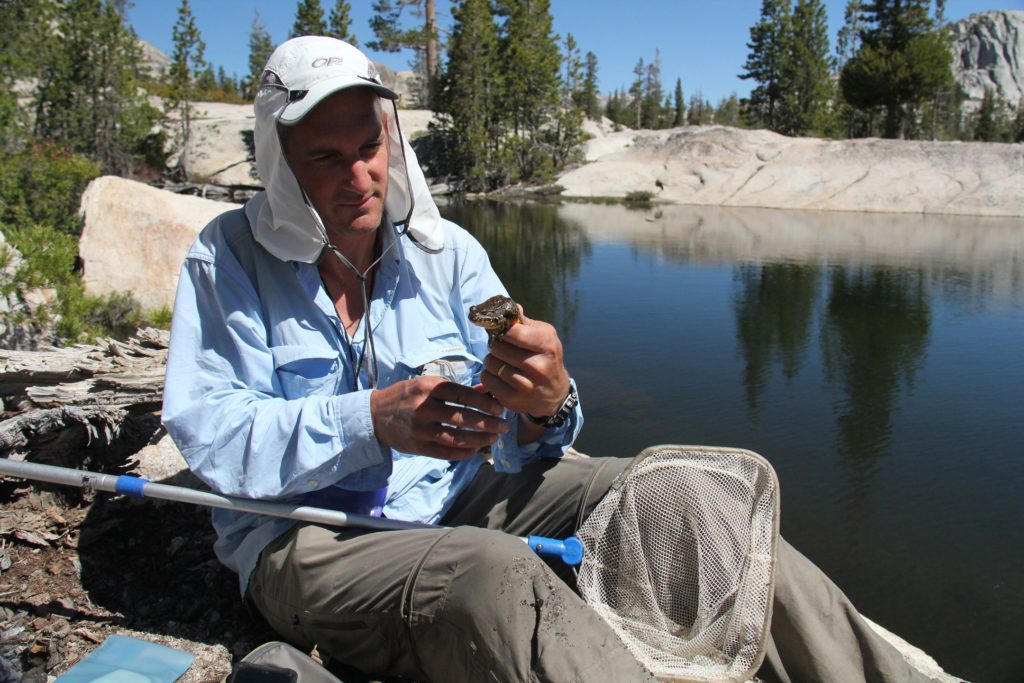 Knapp and his team have been tracking this frog species in Yosemite for 20 years and are able to discern the factors contributing to the population decline of the Sierra Nevada frogs. The team will now try to help increase the population. / Courtesy of Michael Hernandez

While several frog species in Australia have shown similar trends of recovery from the fungal disease, the particular importance of Knapp’s study is that it is one of the first of its kind to express such a great increase in population on a large spatial scale.

“This is recovery across an entire landscape, [and] not just [by] individual, small populations or collections of populations. It gives us a success story where there hasn’t been very many, and at a landscape scale that is all of Yosemite National Park — a really big piece of the historical range of this frog,” Knapp said

Knapp and his colleagues are continuing to monitor species populations to describe their recovery trends and observe whether they will maintain stability. Further actions comprise of the ongoing program to remove non-native fish from key habitats and conducting additional studies on the likely changing relationship between this frog species and the chytrid fungus.

“Even though what we’re seeing is really exciting and really good news for the Yosemite frog populations, it’s just the beginning of recovery. We have a long way to go,” Knapp said.